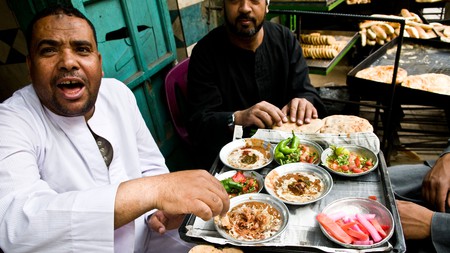 Think of Egypt and images of the Nile and the pyramids spring to mind – but there’s far more to it than that, especially when it comes to food. If you’re planning a visit to Cairo, take a look at our pick of what to order when in the capital.

Delicious food is plentiful in Cairo, be it on the streets bustling with vendors, or on the table in people’s homes. If you’re lucky enough to be invited over for a meal, be sure to grab the opportunity with both hands and get stuck in. Otherwise, you might want to consider booking a spot on our specially curated culture-rich trip to Egypt which includes a home-cooked lunch in a local’s home, among many other immersive activities.

You’ll be generously fed with a variety of tasty and hearty foods, so make sure you arrive hungry. Here’s our pick of the best dishes that really distinguish Egyptian cuisine from the rest.

This leafy soup is an almost sacrosanct dish for many Egyptians. The simple broth is packed with chopped leafy greens, a hint of garlic and is often served with rice and chicken or rabbit. Many actually add the rice and meat into the soup and eat it as one. Add some bread for extra comfort. 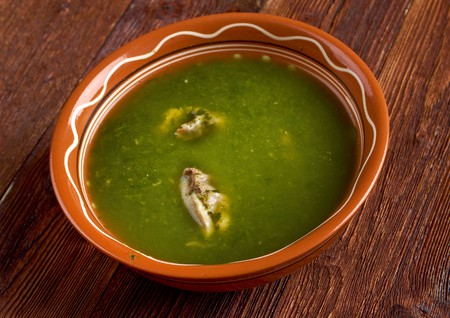 Egyptian falafel (also known as taamiya) is made with fava beans and herbs, resulting in a bright green centre and a crispy deep-fried, brown exterior. Eaten with tahina (a vinegary sauce made from tahini paste), bread and pickles, this tasty meal is eaten for breakfast or any time of the day. 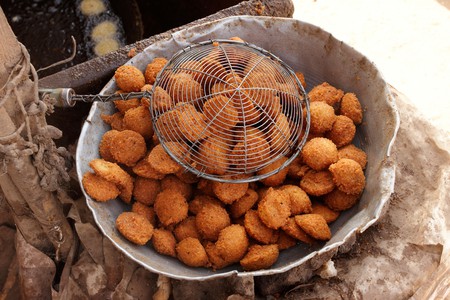 You can’t go to Egypt without trying this beloved bean stew, which is cooked with cumin, olive oil, lemon juice, garlic and onion. Served with bread, tahina and salads, this staple is eaten for breakfast or in a pitta type sandwich from street vendors as a quick meal. 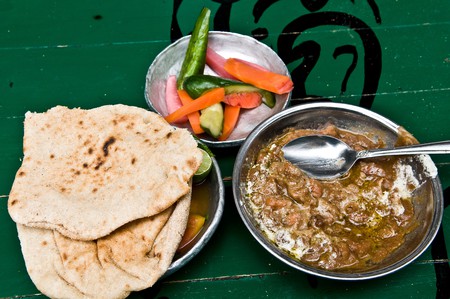 Mahshi, which means ‘stuffed’, is literally all things stuffed. Vegetables like marrows, peppers, aubergines, cabbage leaves and grapevine leaves, are all packed with different combinations of spiced rice, minced meat and pine nuts. They are laborious to make, but so satisfying to eat. Wara’ enab is a popular type of mahshi, made with grapevine leaves, known in Greece as dolmades. The mixture of rice and sometimes meat is skilfully wrapped in the leaves and cooked until tender. These juicy fingers are easy to pick up with your hands and found at most dinner table spreads in Egypt.

Koshary is carb central with a base of both rice and macaroni. It’s mixed with lentils, sometimes chickpeas, and always a delicious vinegary tomato sauce. It’s topped off with fried onions and is vegan heaven. It is commonly eaten by Coptic people during the many vegan fasts in the year and has become a really popular street food. 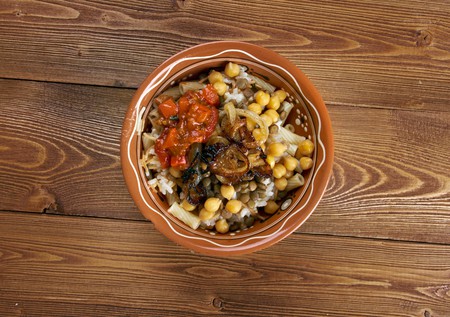 Mesakaa, or moussaka as it’s known in Greece, is a layered and baked aubergine dish. The bitterness is traditionally removed from the aubergines with salt – and sunshine – and they’re baked or fried. The dish is assembled by layering the aubergine with a spicy tomato sauce, and sometimes minced meat is added. It’s then baked until the aubergines become completely tender and soak up all the flavour from the sauce, and is then served with rice. 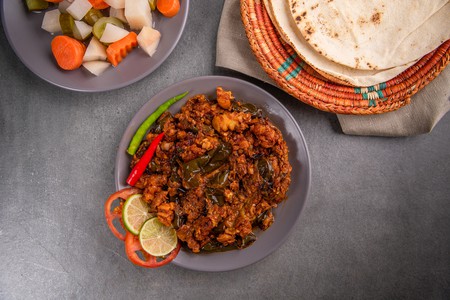 Kishk is a white soup made from fermented bulgar wheat and has a creamy and malty taste. This dish originates from Upper Egypt where the dried balls of bulgar wheat are sourced from. The dried bulgar is then soaked in water before being added to the soup broth. Especially perfect for winter, this soup is creamy and comforting.

Ringa is a smoked herring dish prepared with pickled onions, other salads and lots of lemon. It is traditionally eaten all over Egypt on Easter Monday, known in Egypt as Sham El Nessim, a public holiday that has been celebrated since the pharaonic era. It can be found at most seafood restaurants and is a crowd favourite at any time of the year. Packed with fishy umami, it’s a punchy dish.

Something of a love child between a croissant and a millefeuille, this indulgent dish features crisp flaky pastry full of buttery layers, made with ghee (or samna as it is known in Egypt). People eat it savoury with cheese or have it sweet with honey or molasses – some people have it both sweet and savoury. It’s a particularly delicious treat when enjoyed with tea. 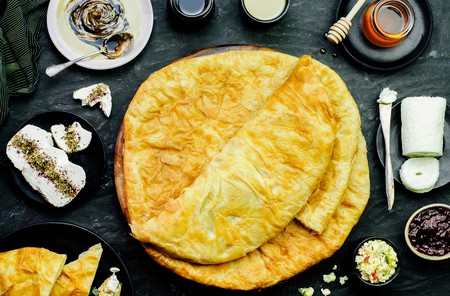 Sweet or savoury, ‘feteer meshaltet’ is perfect if you want to indulge | © Dina Saeed / Shutterstock

Hawawshi, a popular street food in Egypt, is a mix between a pie and a sandwich. It’s filled with minced meat and usually prepared with peppers, onions and sometimes pine nuts. The fatty meat juices soak into the pastry, which is toasted until crisp on the outside. It’s comfort food on the go. 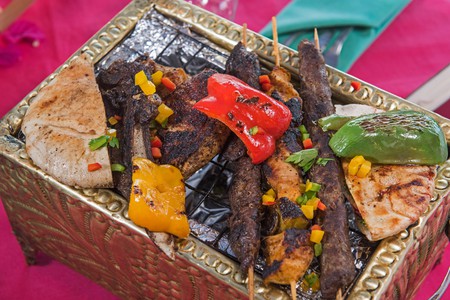