From Cattle to Royalty, African Board Games Are Rich in Culture 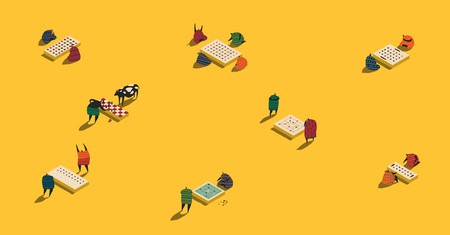 Games are an important part of many African societies, and some date back to hundreds of years. A few may appear to be frivolous entertainment, but most have underlying stories of strategy and highlight the importance of day-to-day tasks such as cattle herding.

Now, some are calling for traditional African games to be incorporated into modern schooling, in an attempt to preserve and learn from them, so we’re taking a look at some traditional board games from across Africa.

Morabaraba is one of the most popular board games in Southern Africa, though variations are also played throughout Africa (Achi in Ghana; Shax in Ethiopia) and the world. Certain cultural and language groups have their own adaptations: for example, Sesotho-speakers in South Africa use a different board layout.

Some boards have been found etched into rock and estimated to be 800 years old. It’s a two-player game similar to Twelve Men’s Morris, whereby players move 12 coins or bottle tops around a square board. In Southern Africa, it is particularly popular among rural youth who herd cattle. Players there have adapted the game to call the markers ‘cows’, and in some regions, it’s used to teach youth how to think tactically about livestock.

The one with many names

Mancala is widely regarded as one of the oldest board games in the world, and it’s played across the continent under many different names. Recent studies have linked its distribution to migration routes, leading researchers to hypothesise that traders took Mancala with them as they travelled along the Nile.

It’s a two-player turn-based game of logic that’s highly accessible. It’s often played with stones, seeds or beads as counters, and the ‘board’ often consists of two or four rows of small holes in the ground, though travelling players may well have constructed long, thin boards out of wood for easy transportation.

The Egyptian game of Senet dates back as far as 1295 BC, and is even depicted in a painting in the tomb of Egyptian Queen Nefertari. So old is the game that no official written rules have been located, and instead, most aspects of Senet have been handed down verbally through generations.

The board consists of 30 squares laid out in a 10 x 3 grid, and follows a similar format to backgammon. Though modern versions exist, including smart phone apps, historians are still unsure of the exact original rules.

Butterfly is a popular game in Mozambique, and though it resembles checkers, the unique board that resembles a butterfly gives it a marked point of difference. Historians suspect the game draws influence from the Middle Eastern game Alquerque, or Qirkat, which dates back to the 10th century. It has strong links to the time when the Moors invaded Spain, and as such it’s likely that it arrived in Mozambique via trade routes, where it was later adapted with local flair. Though physical boards do exist for Butterfly, its simplicity makes it easy to create a temporary board out of paper or to draw one in sand.

The West African game of Dara, particularly popular in Nigeria, follows a similar gameplay to tic-tac-toe. It’s been around for hundreds of years, and goes by at least three different names: Dara, Derrah or Doki.

Unlike tic-tac-toe, in which players aim to achieve three stones in a row, players of Dara can remove one of their opponent’s pieces. The board, usually a 5 x 6 grid, requires players to exercise a great deal of strategy and advance planning, making it a valuable learning tool.

Seega is another board game with origins in Egypt, though it’s played in large parts of North and West Africa. It’s an easy game to recreate without an actual board, making it widely popular. Many people draw it out on paper or in sand, and historians estimate that the game goes back many years. There are even Seega boards carved out on the floors of Egyptian temples. Some of the temples date back to 1300 BC, though historians are unsure of the exact date of the Seega board carvings.

There are several variations of the game, and given its ancient roots, all current rules have been handed down orally. The first written rules appeared in the 1800s, after historian Edward William Lane visited Egypt and observed nomads playing the game. Its humble setup means that anyone could play the game, including the country’s poor, and light-travelling nomads.

This popular Madagascan board game is hundreds of years old, and follows a similar thread to Kharbaga and Zamma. Legend has it that in the 1500s, a king’s son in Madagascar was so involved in a game of Fanorona that he missed an opportunity to gain a valuable inheritance from his father.

True or not, the legend points to the game’s addictive qualities and its popularity in that country. Though variations exist around the continent, a typical Fanorona board consists of a 9 x 5 grid, and each player has 22 pieces, making it a complex game for young players to engage with.

Historians believe the game of Tsoro Yematatu, meaning ‘stone game played with three’, originated in Zimbabwe, but it’s common in other Southern African nations. Some consider it to be an African version of tic-tac-toe, though this variation is played in a triangular layout.

The game is one of many African mathematical games, and the aim is to get three pieces, often stones or bottle tops, in a row. In some variations, stones are allowed to jump opponents, resulting in a seemingly neverending game.