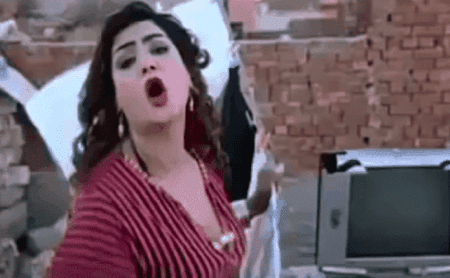 A female pop star has been arrested in Egypt just weeks after another singer was jailed for two years over a controversial music video.

Leila Amer has been detained while authorities investigate the video for her song ‘Boss Oumek’ (which translate as ‘Look At Your Mother’), according to local reports.

The clip, which shows a belly dancer being watched on television by a man in his home as she tries to entice him into the song, has sparked outrage in the conservative country.

Lawyer Ahmed Mahran, who filed a complaint to authorities, told local journalists that Amer’s video was a ‘moral disaster’ and posed a ‘great risk’ to Egypt.

‘These works represent an attack on society and the destruction of the state, it being an Islamic country,’ he said. ‘Such works contributed significantly to the level our society has reached, including the spread of sexual harassment and inappropriate words. The clip is a disgrace to public modesty and incites immorality, violating Article 269 of the Penal Code.’

The video was slammed for its ‘suggestive’ and ‘provocative gestures’.

Amer’s arrest comes less than a month after singer Shyma was jailed for two years for ‘inciting debauchery’ with her ‘I Have Issues’ music video, which shows her eating a banana. Last week, it was reported that her sentence has been reduced to one year following an appeal.

Authorities in Egypt have been cracking down on artists they claim promote debauchery and immorality over the past few years.

Bellydancers Shakira and Bardis were arrested and sentenced to six months in prison in 2015 for videos posted on YouTube.