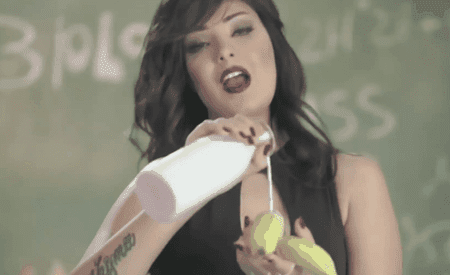 Egyptian singer Shyma has reportedly been jailed for appearing in a music video which shows her suggestively eating a banana in her underwear.

The 21-year-old, whose real name is Shaimaa Ahmed, was arrested last month after the video for ‘I Have Issues’ sparked outrage in the conservative country.

The clip racked up over a million views within the first few days of being posted online.

Shyma was found guilty on Tuesday of inciting debauchery and publishing an indecent film, according to local media.

She was sentenced to two years in prison along with the video’s director, Mohamed Gamal, and fined 10,000 Egyptian pounds (£420) each by the court in Cairo.

The video shows Shyma standing in front of a classroom full of men, licking an apple, tasting the icing on a piece of chocolate cake and pouring milk over a banana before eating it.

Shyma reportedly denied the accusations of ‘harming public morality’ and claimed Gamal had included the controversial scenes without her consent. 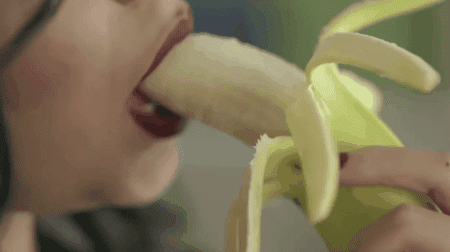 The singer apologised before she was arrested amid criticism by MPs to anyone who had interpreted the video ‘in an inappropriate way’.

She wrote on her now-deleted Facebook page: ‘I didn’t imagine all this would happen and that I would be subjected to such a strong attack from everyone.’

Marwan Younis, an influential blogger and presenter, started a campaign on Facebook to get his followers to report Shyma’s page to the social network for its sexually explicit content, which led to it being shut down.

The singer, who is a former Arab Idol contestant from Tanta, northern Egypt, reportedly appeared in court with a niqab covering her face and was seen reading the Quran while waiting for the sentence to be issued.

She’s the latest artist to face prosecution in the country. Shakira and Bardis, two bellydancers, were sentenced to six months in prison in 2015 for inciting debauchery and immorality in their music videos.