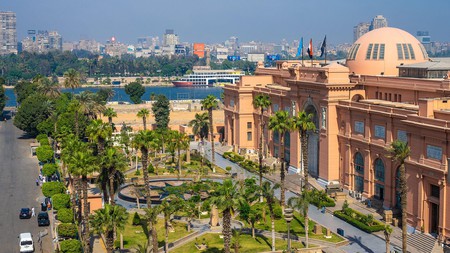 An aerial view of the facade of the Egyptian Museum in Cairo, with the Nile River in the background | © Pavel Muravev / Alamy Stock Photo

The Egyptian Museum in Cairo, also known as the Museum of Egyptian Antiquities, is home to more than 120,000 artefacts from ancient Egypt. Designed by the French architect Marcel Dourgnon, the building is one of the largest museums in the region. It was first built in 1835 but was moved many times until finally settling on Tahrir Square in 1902. Here are 10 artefacts you can’t miss on your visit to the Egyptian Museum.

Looking for an immersive introduction to ancient Egyptian history? Consider joining Culture Trip’s exclusive small-group Egypt adventure, which includes visits to many of the country’s most significant archaeological and cultural attractions. 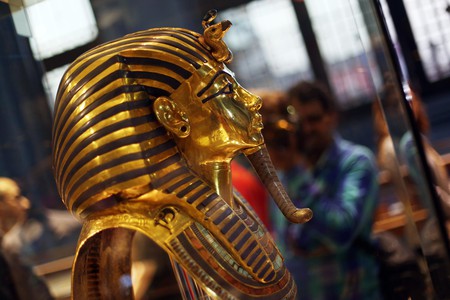 The Mask of Tutankhamun is one of the most famous works of art in the world. Discovered by Howard Carter in 1925, it is the death mask of the Egyptian pharaoh of the 18th dynasty, Tutankhamun, who reigned from 1332-1323BCE. It’s made from 11kg (24lb) of solid gold.

The Grave Mask of King Amenemope 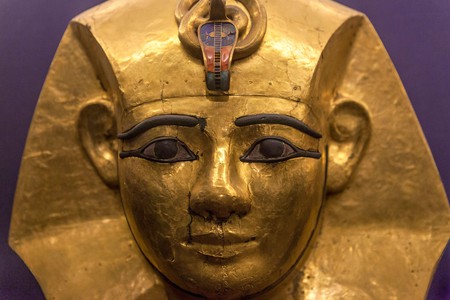 Amenemope was an ancient Egyptian pharaoh of the 21st dynasty, who was also the son and successor of Psusennes I. The Grave Mask of King Amenemope is made of gold and cartonnage, while other funerary goods, including masks that portray the king as young, can be found in Cairo Museum.

The Palette of Narmer, or Narmer Palette, is the “first historical document in the world,” according to American Egyptologist Bob Brier. The palette dates back to the 31st century BCE and holds some of the earliest hieroglyphic engravings ever found. It is believed the palette portrays King Narmer’s unification of Upper and Lower Egypt.

Mummy Mask of Psusennes I

The tomb of Pseusennes I was discovered by professor Pierre Montent, a French Egyptologist, in Tanis in 1940. Unfortunately, due to the moisture in the ground in Lower Egypt, most of the wooden objects had disintegrated. But the mask, which is made of gold and lapis lazuli, a deep blue semi-precious stone, was recovered. The mask is considered one of the masterpieces of the treasures of Tanis.

Khufu, an ancient Egyptian pharaoh of the first dynasty and builder of the Great Pyramid of Giza, ruled for 63 years from 2589BCE to 2566BCE. The Statue of Khufu, also known as the Ivory Figurine of Khufu, was discovered by Flinders Pitrie in 1903 during an excavation in Abydos. The statue is considered a major historical and archaeological artefact, although it is only pocket-sized in stature.

Khafra, Khefren, or Chephren, was an ancient Egpytian pharaoh of the fourth dynasty, son of Khufu and the builder of the pyramid of Khafra at Giza. Not much is known about him, but it is believed that he reigned for around 26 years. Some authors say the Great Sphinx of Giza was also built for him in approximately 2500BCE. The Statue of Khafra is made of diorite. 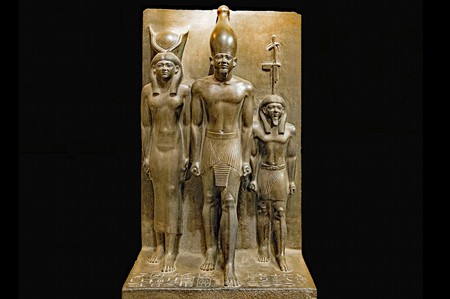 Menkaura, Mykerinos or Menkheres, an ancient Egyptian pharaoh and king of the 4th dynasty, was the son of Khafra and the grandson of Khufu as well as builder of the smallest pyramid in Giza. The Statue of Menkaure is made of greywacke, a grey earthy rock characterized by its hardness and dark colour. 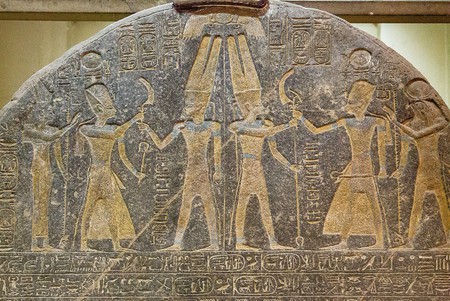 The upper part of the stele of Merenptah, famous because it shows the first mention of Israel | © Alain Guilleux / Alamy Stock Photo

The Merneptah Stele, also known as the Victory Stele of Merneptah or Israel Stele, is an engraving by the ancient Egyptian king Merneptah – fourth ruler of the 19th dynasty, who reigned from 1213 to 1203BCE. It was discovered by English Egyptologist Flinders Petrie in 1896 at Thebes. 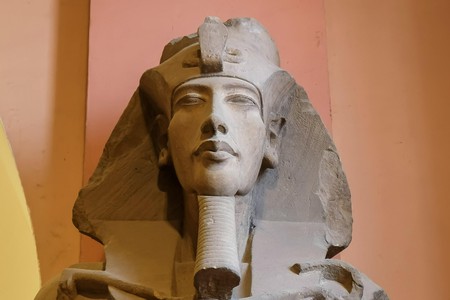 Akhenaten, Echnaton, Akhenaton, Ikhnaton or Khauenaten, was an ancient Egyptian king of the 18th dynasty who ruled for 17 years and was known for abandoning traditional Egyptian polytheism and introducing monolatrism. The statue of Akhenaton was built in the Amarna style, which was mainly characterised by a sense of movement in the images with raised heads.

Wendjebauendjed was an ancient Egyptian general and a high priest from the reign of Psusennes I of the 21st dynasty. He held many military, religious and administrative titles which gave him the honour of being buried in the royal necropolis, although he wasn’t of royal descent. His tomb was found by Pierre Montent inside the royal necropolis of Tanis.