An Insider’s Guide to Mohandessin, Cairo 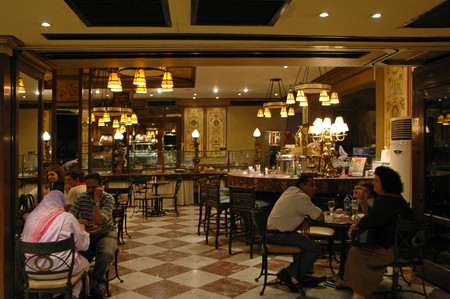 Where Giza meets Cairo proper, Mohandessin is a sprawling and often hectic part of town. Though its traffic is often a nightmare, that shouldn’t put you off exploring the neighbourhood, which offers dining, shopping and nightlife venues in abundance.

Sometimes overwhelming thanks to its wide, busy streets and ’50s Brutalist architecture, it’s nonetheless quite easy to navigate and is home to the closest thing Egypt has to a high street (mall culture reigns supreme in Cairo). The district stands side-by-side with the districts of Dokki and Agouza, though even locals can’t quite define where one ends and the other begins, so Mohandessin often stands as a catch-all label for the whole area starting from the west bank of the Nile opposite the island of Zamalek and reaching to the 26 July Corridor – a highway that leads to the suburb of 6 October City.

The best restaurants in Mohandessin

A largely middle- and upper-class area, Mohandessin is buzzing with restaurants, cafés, bakeries and fast-food joints alike. In fact, much of Mohandessin’s traffic is due to people pulling up and parking at popular restaurants and cafés, and many newcomers to the scene open their first branches here. You’ll find a whole spectrum of cuisines, moods and concepts and no lack of places to eat even in the wee hours of the morning.

While fusion food is popular in Cairo, this double restaurant does it differently; it is, in fact, two restaurants in one. It’s easy to miss this fourth-floor restaurant when looking for it on the mammoth Gam’et El Dewal Street, but keep your eyes gazing upward and you’ll find it. Raoucha’s menu offers fresh, vibrant Lebanese cuisine, while Kandahar is probably one of the most authentic Indian restaurants in Egypt.

An Egyptian seafood meal is considered a special occasion in most local households. When Egyptians eat seafood, the spread often includes several types of fish, as well as all sorts of shellfish and a slew of sides and salads. Flying Fish on the Nile Corniche at Agouza celebrates this Egyptian tradition with a robust menu of fresh seafood, generously seasoned. Try their fan-favourite seafood soup and you won’t regret it. Though this restaurant does not serve alcohol, you can bring your own bottle of beer or wine, and they’ll pour it for you alongside your meal.

Close to Cairo University on the Dokki side of Mohandessin, Semsema is the stuff of legends. Though there’s a typical selection of Middle Eastern fast foods on the menu, locals go here for one thing, and one thing only: Semsema’s shawarma. Cheap, cheerful, quick and filling, they serve their tender meat topped with tahini sauce in tiny buns – so make sure to get at least four if you’re hungry! Open until 4am every night, this is a great spot for midnight munchies after painting the town red.

Tucked on a side road near the chaotic and endlessly busy Lebanon Square, Magrashi is a bustling restaurant specialising in traditional Saudi Arabian food. Catering originally to the large Saudi and greater GCC expat community, the hearty, mostly carnivorous meals served here have garnered it a cult following of culinary explorers. Finish your meal with a cup of traditional Arabian tea for the full experience.

The best bars and clubs in Mohandessin

Cairenes are creatures of the night, and nowhere exemplifies this as much as the Mohandessin district, where the 24/7 lifestyle is embedded in the culture. From rowdy techno raves to a pint over a friendly game of darts, the district’s bars and clubs have revellers from across the Greater Cairo area descending there every day of the week.

Music Venue
Facebook
Email
Twitter
Pinterest
Copy link
Share
Map View
Perhaps Cairo’s favourite club, Cairo Jazz Club – or CJC, as the locals call it – is a cornerstone in the big city’s nightlife scene. With something on every night of the week, you’ll get your pick of jazz, indie, hip-hop, EDM or Arabic-fusion at this iconic spot. They have a strictly over-25 door policy, and you’re better off making a reservation, especially for nights featuring international acts. Pro tip: for a bar/club, CJC serves fantastic food, so start your night early with a meal before dancing the night away.
Open In Google Maps
197 26th of July Corridor, Giza Governorate, Egypt
+201068804764
Visit Website
Give us feedback

Dark wood and brass fixtures give Deals Pub a speakeasy vibe, and with commercial music, karaoke nights and classic bar snacks, it’s easy to see why this old-school drinkery remains popular through the years. With draught beer on tap, a selection of Egyptian wines and bar-load of imported spirits, it’s a great spot for relaxed drinks and mingling with the regulars.

An offshoot from the Deals Pub brand (mentioned above), Deals 14 is a quieter version of its namesake on the 14th floor of the Swiss Inn Hotel on Higaz Street. Here, you can play darts, pool, snooker and more classic pub games over a pint, while chill jazz tunes play in the background.

With a purposely dive-bar feel, Underground is an unpretentious bar and club with a strong focus on local musicians and DJs. There’s a different genre every night, ranging from EDM to acoustic rock, but their most intriguing nights have to be the ones when they have traditional Egyptian music acts from across the country in the spotlight. Reservations are recommended, and they’ll often ask you to come in gender-balanced groups.

The best cafés and coffee shops in Mohandessin

The unofficial district of cafés, you can’t walk a few metres in Mohandessin without coming across a shisha-and-coffee-fuelled establishment. Meeting points for both youngsters and older generations alike, most cafés (and in Egypt, café almost always means a place that serves shisha) come alive in the evenings with big groups of regular patrons. Meanwhile, more typical coffee shops, including international chains, make Mohandessin the place to go for a cup of caffeine.

Just off the massive Gam’et El Dewal Street, tucked away on Geziret El Arab Street, Warda Café takes its design inspiration from Egypt’s pop culture and iconic imagery. You’ll find some of Cairo’s best Turkish coffee here, as well as your cappuccinos, lattes and espressos. Great for a traditional Egyptian breakfast, people rave about their food as well as their beverages and shisha.

On the corner of Khan Younis and Fawzi Ramah streets, Blueberry Café is a cute, quirky space, filled with floral and fruit prints. Able to accommodate bigger groups, their novelty teapots and huge selection of bakery items and dessert compete only with shisha in popularity. Non-smokers might have an issue with their ventilation, but if you enjoy a shisha pipe in one hand and a cup of sweet tea in the other, this is a must-visit. 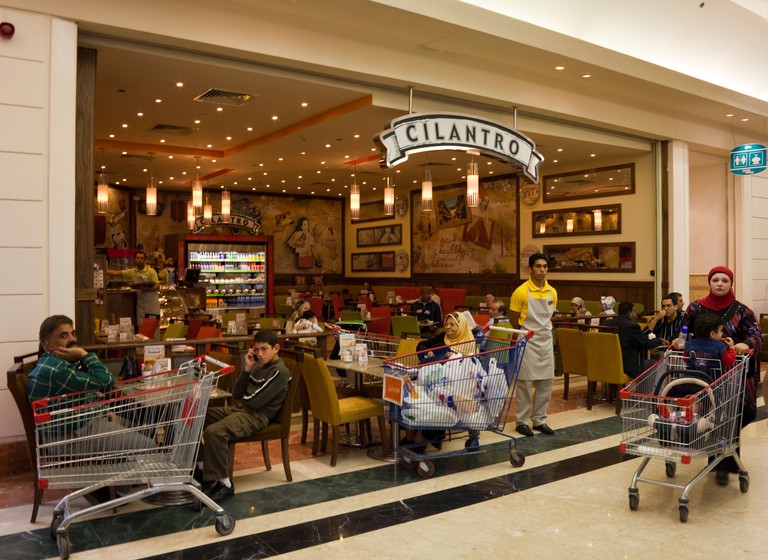 A home-grown Egyptian coffee shop chain, Cilantro has a place in the heart of every Egyptian. Though there are more than a hundred branches of Cilantro, the flagship location on the corner of Game’t El Dewal and Syria streets is always buzzing with students, freelance workers, couples and big groups of friends alike. With a whole roster of espresso-based drinks, as well as Egyptian-fusion beverages (think hibiscus coolers and coffee with cardamom), it’s perfect for your morning dose of caffeine.

Over on Amman Square on the Dokki side of the neighbourhood, Kanaka Café is a comfortable getaway, removed from the beeping cars that overrun most areas of Mohandessin. Decked out with hip reclaimed wood, rustic retro chairs and rotating art prints, this hipster haven serves up your typical espresso-based coffees, shisha pipes and Mediterranean cuisine. Bonus points go to its high-speed Wi-Fi.