A Beginner's Guide to the Religions of Egypt 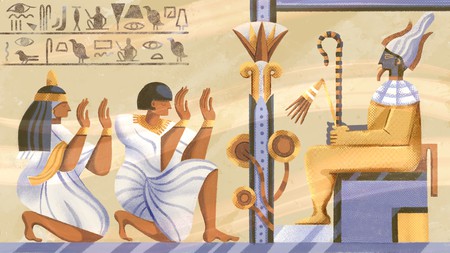 Egypt has one of the longest documented histories of any country in the world. The influence of various religious beliefs, from its birth and through to subsequent periods of global recognition, highlight a rich and varied set of belief systems that have helped shape the nation today. Here’s what you need to know.

The religions of ancient Egypt

Religious beliefs in ancient Egypt were a formal set of practices known as Ma’at that followed the concepts of truth, balance, order, harmony, law, morality and justice. The ultimate aim was to ensure order in the cosmos, and they were sometimes practised through cults praying to individual gods. But more commonly, people would bow down to a number of gods.

The role of pharaoh, which applied to both male and female rulers, was respected as the highest political ranking in Egypt and was seen on par with gods, who governed all aspects of Egyptian life at the time. Grand burial chambers were built to mark the passing of each pharaoh, as worshippers believed they would lead even after death. The Pyramids of Giza are a fine example of this today.

Between 3150 BC and 30 BC more than 2,000 deities were worshipped – some of which became more important, while others faded into obscurity. There are so many that scholars settled on using the collective term ‘ancient Egyptian religions’. Writings and monuments that are still visible today have helped shaped a system of beliefs that still have a huge influence across the country today. 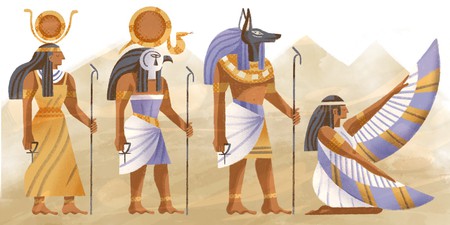 The gods of Egypt

Many of the most important gods from this period have become household names, thanks to their depictions in the tombs and burial chambers of the pharaohs across Egypt. For ancient believers, the universe came into existence from Nun – a god of watery chaos who existed before there was land and who gave birth to the first deities.

The Osiris myth is a popular story that describes how subsequent gods were created from sky god Geb and earth goddess Nut. Their children – Isis, Osiris, Set and Nepthys – become embroiled in a feud, the result of which is the birth of the god of the sky: Horus.

Ra was the falcon-headed god of the sun, one of the most important gods throughout Egyptian history. Just as the sun rose in the east and set in the west, so many of the constructs of Egyptian life were centred around this routine. The Nile was the most fertile in the east (as the west led directly into the boundless expanse of the Saharan desert), leading to the practice of burying the dead in the west where the sun set. The Valley of the Kings, the grandest collection of all the burial tombs in Egypt, was forged from this belief in the sun god.

As with other gods, the name “Ra” was combined with others to give form for composite deities. Two popular versions of this are Amun-Ra and Atum-Ra. Some pharaohs, such as successful female ruler Hatshepsut, were able to use their understanding of religion to manipulate the public and remain in positions of power. Later rulers during the New Kingdom era were focussed on creating a single deity to worship, with some villages adopting the monotheistic approach, which can be seen by recently discovered artefacts. Our modern understanding of “god” is comparable to the position Amun-Ra would have held in this period, a single divine presence as previously believed in by the earliest Ancient Egyptian cults.

The largest minority in Egypt are the Coptic Christians, with around 20 to 30 million followers in the country. The church is headed by the Pope of Alexandria and Patriarch of All Africa on the Holy See of Saint Mark, tracing some of its roots back to the age of the pharaohs.

While Alexandria holds special significance to the Copts of Egypt, Cairo also has a number of historical churches and monuments. As a symbol of how religion has shaped the country, many churches stand side by side with mosques, leaving an undeniable physical mark on the Egypt – much like the pharaohs had done millennia ago.

Early Copts were persecuted by the Romans, who had ruled ancient Egypt from 30 BC up until the emergence of Islam some 700 years later. During Roman rule, the Coptic Christians would often hide in temples and tombs to avoid detection, and in some cases they would leave their own marks on top of ancient hieroglyphics.

How Cairo got its name

The most important Sunni Islamic institution in the world, Al-Azhar University is located in a district of the capital city called Islamic Cairo – otherwise known as Historic Cairo and Medieval Cairo. Prior to the arrival of the first Muslims in Egypt in AD 640, Alexandria was the capital of Egypt. But keen to establish their own base in the style of other Islamic powerhouses in the Middle East, a number of religious leaders began to focus their efforts on what is today known as Cairo. The original Muslim name for the city was Fusat – which is now Old Cairo – but the Fatimid caliphate of Jawhar al-Siqilli renamed the city as al-Mu’izziyya al-Qaahirah. This was later shortened to al-Qaahirah (Victorious City), with subsequent rulers mainly during the Ottoman era allowing the name to evolve to Cairo.

Salah ad-Din (Saladin), the highly decorated general and sultan, built a fortified city within the city and became the first ruler of Egypt and Syria. The citadel he built became a strategic focal point for Islam for over 700 years, including the ‘golden age’ in the 14th century. 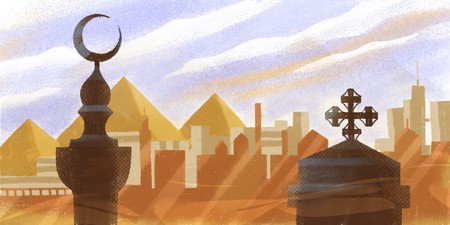 Exact numbers are difficult to access, but the most recent census of the country revealed that roughly 85% of the general population of Egypt today practices Islam, and the vast majority of those are Sunni Muslims. A 1971 constitution declared that Islam was the national religion, and it has been the official state religion since 1980. Religious freedom is guaranteed by the constitution, too.

There are other Islamic denominations in Egypt: Shia Muslims who once ruled the country now make up only a small proportion of the population; mystical Sufism elements of Islam can still be seen in Egypt, as well as other parts of North Africa.

An interesting modern development is the emergence of Egyptians identifying themselves as non-denominational – not adhering to any particular subsect but rather just as Muslim. This label is popular among the younger population of the country.