AFRICA
/
EGYPT
/
Things to Do 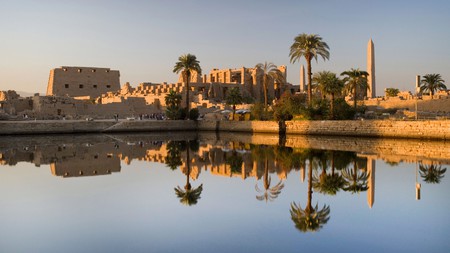 The Temple of Karnak, in Luxor, reflected in the sacred lake at sunset | © Peter de Clercq / Alamy Stock Photo

The Sphinx, the Nile, the Pyramids of Giza. You don’t need to have visited Egypt to be aware of its pulling power. These are sensational sights, of course, but they’re just three of many in this fascinating country, where you’ll also find remote desert monasteries, romantic coastal resorts, once-drowned ancient temples and millennial masterpieces. Here’s what to see in Egypt . 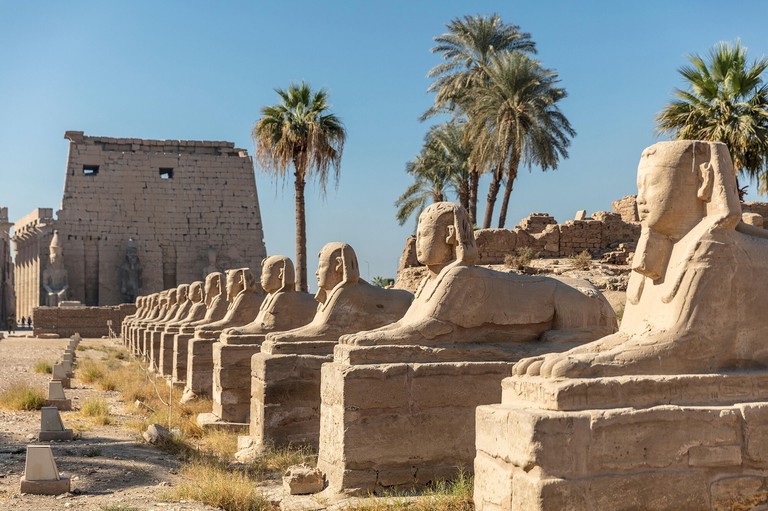 This huge temple complex differs from most archaeological relics in Luxor in that it wasn’t dedicated to a single pharaoh or god – it was built as a ceremonial temple for the crowning of Egypt’s rulers. It’s a showstopper, with an avenue of human-headed sphinxes leading up to the entrance where two broad sandstone towers, decorated with carved hieroglyphs and battle scenes, usher you in. Inside, you’ll find towering statues of gods, endless columns and colonnades as well as the intriguing remnants of internal structures such as chapels. You can enjoy a candlelit tour of Luxor Temple as part of Culture Trip’s immersive 10-day Egypt adventure, led by our local insider. 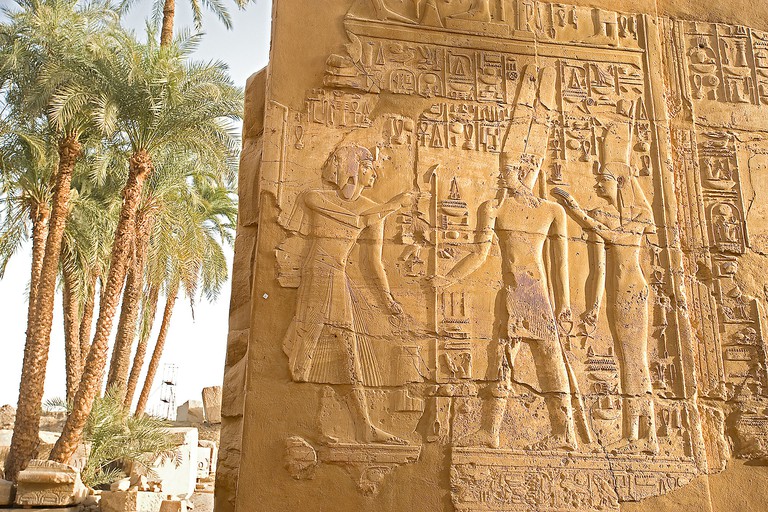 Karnak is the second-most-visited site in Egypt, after the Pyramids at Giza. And it’s not hard to see why – it’s absolutely epic, covering an area the size of a village. In fact even the name, Karnak, is derived from the Arabic khurnak, meaning fortified village. At one stage it was connected to the Temple of Luxor by a 2.5km (1.5mi) avenue of sphinx statues, some of which are still intact. It’s also unique in that, having been constructed over almost two millennia, some of the gods represented in the later sections wouldn’t have been recognised by those who built the earlier parts.

Valley of the Kings 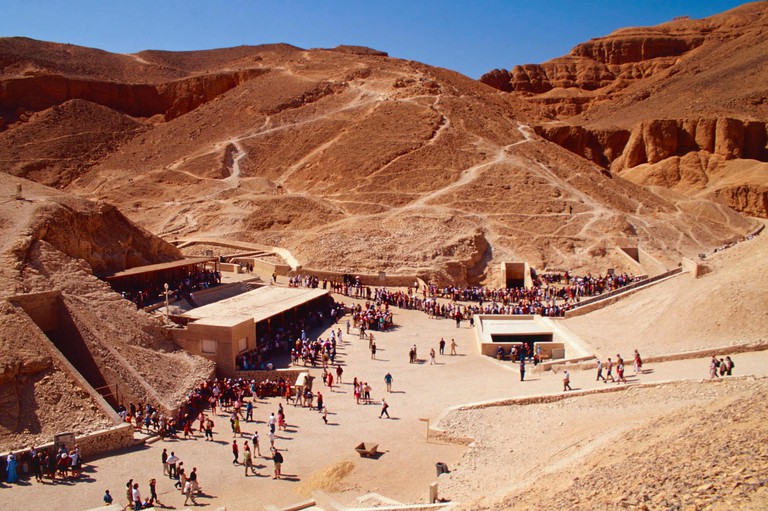 It’s arguably the most evocative ancient Egyptian site; the source of all the lore of undiscovered tombs piled with riches, mummies’ curses and tomb raiders. Here is the tomb of Tutankhamun, discovered in the 1920s and still a site of excavation, exploration and conservation for archaeologistsw. Reached from Luxor by boat and then by road, it is a place of scorched desert hills where you’ll feel millennia swallow you whole as you descend into the cool, immaculately preserved tombs, their decorative reliefs looking almost as bright as the time they were carved and painted. It also features on Culture Trip’s exclusive small-group Egypt tour. 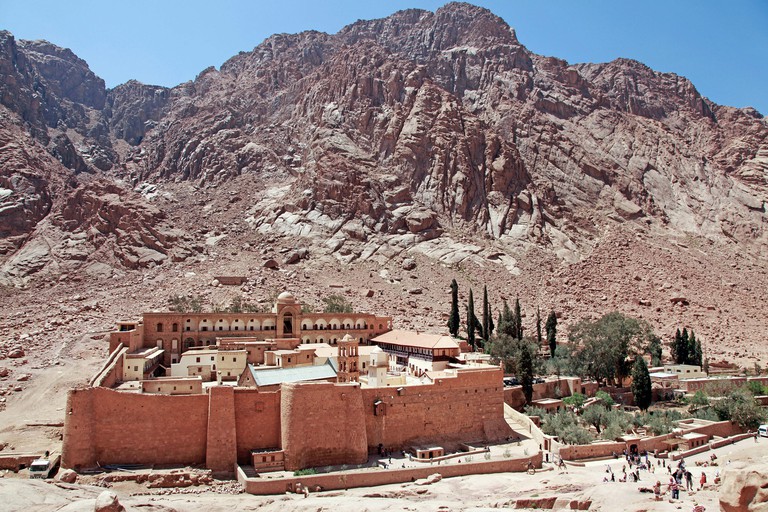 St Catherine’s Monastery stands at the base of three hulking mountains on the Sinai Peninsula, one of which, Jabal Musa (also known as Mount Sinai), was the mountain upon which it is said God gave Moses the Ten Commandments. The monastery feels like a portal to another world. And in a way, it is, containing irreplaceable artworks and objects, from mosaics to chalices, manuscripts to icons, which are some of the oldest surviving Christian images anywhere in the world. Its library, in operation since the sixth century CE, is the oldest in continuous operation in the world, its collection of ancient texts rivalled only by the Vatican. 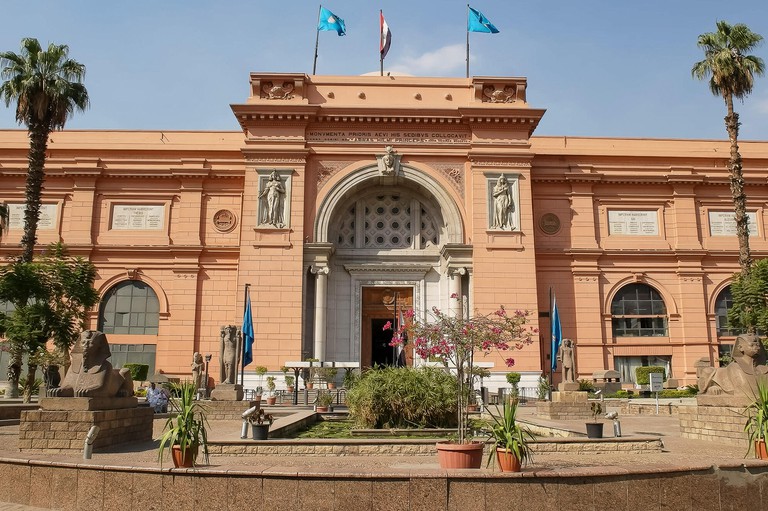 © Christopher Bellette / Alamy Stock Photo
Built at the turn of the 20th century, this vast museum in the centre of Cairo houses around 120,000 artefacts – the largest collection of pharaonic antiquities anywhere in the world. On the ground floor is where you’ll find the largest objects – towering statues, entire sections of stone reliefs and other architectural objects. Smaller objects include grimacing mummies, coins and treasures from the tombs of the pharaohs, including the solid-gold death mask of Tutankhamun. There’s also a great gift shop, so you can stock up on souvenirs. 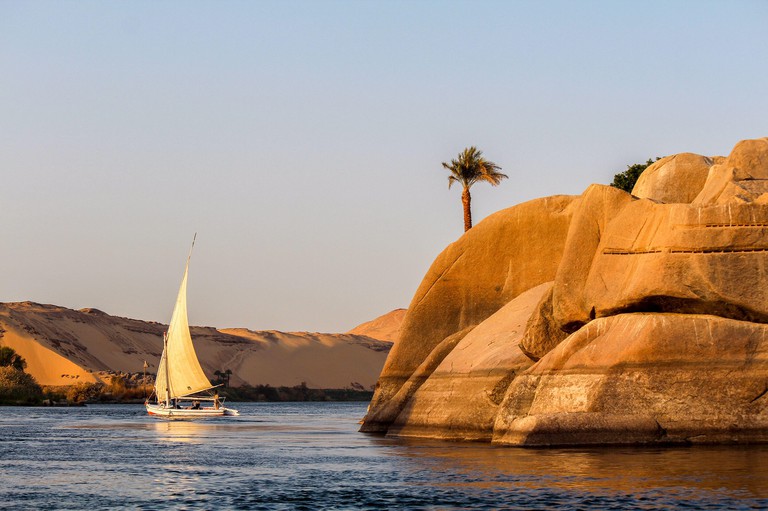 Running through 11 African countries, from Tanzania to Egypt, this seemingly endless river was instrumental in the formation of ancient Egyptian civilisation. The layers of silt carried downstream and deposited along its banks make the desert bloom. Ancient Egyptians could cultivate and trade crops such as wheat – a valuable export that helped the country become rich. It was spiritually significant, too. Ancient Egyptians believed the east represented birth, while the west, where the sun set, represented death and the afterlife, which is why all tombs were located west of the Nile. Whether you take a morning boat trip to one of its temples, or a leisurely few days’ voyage between Luxor and Aswan, a cruise on the Nile is one of life’s great bucket-list tick-offs. 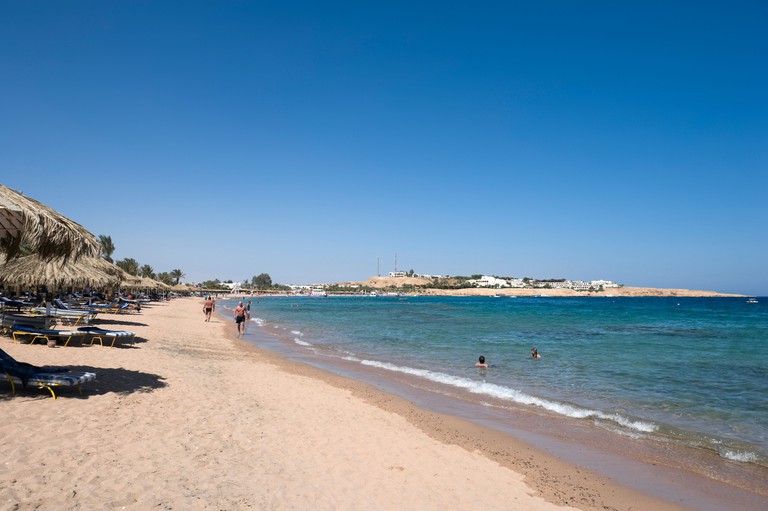 Fringing this sweeping bay in the Red Sea resort of Sharm El-Sheikh is one of the best beaches in Egypt, 1.5km (1mi) of golden sand, clear waters and breeze-ruffled palm trees. Encircled by snazzy resorts, it’s one of the most illustrious places to stay on the Red Sea and a perfect base for boat trips out to the coral reefs. If you don’t want to splash out on day-trip packages, wade into the shallows with your own snorkel and flippers. You’ll find the sea teeming with marine life and among the more extraordinary species are clownfish, spotted stingrays and Arabian boxfish. 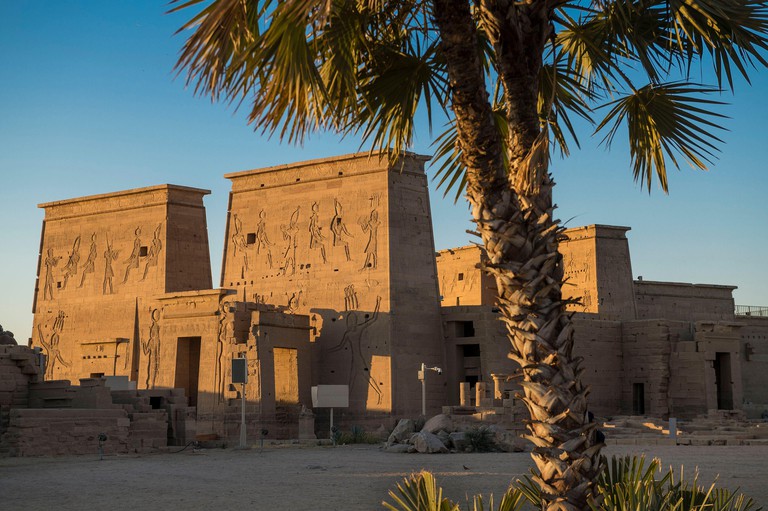 It seems unthinkable now that we could be so reckless as to knowingly flood ancient Egyptian and Roman buildings, especially those still resplendent with precariously delicate artwork. But that’s exactly what happened when, at the end of the 19th century, the Aswan Low Dam was built, raising the water level of Lake Nasser while submerging the island of Philae and its ancient temple complex. In the 1960s, after more than half a century of water damage, it was decided to move the entire temple complex, brick by brick, to the nearby higher island of Agilkia, where it safely stands today. It’s still an extraordinary place to visit, despite the years spent inundated. 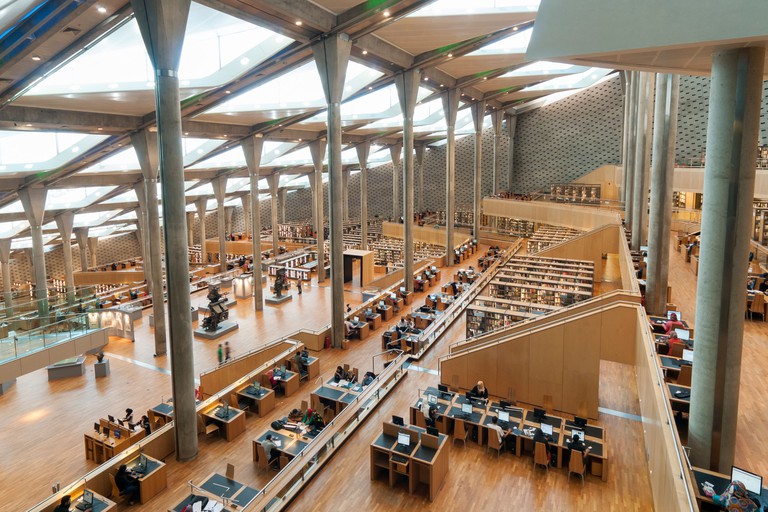 © Petr Svarc / Alamy Stock Photo
With enough shelf space for 8m books, it’s fair to say this library is serious about the power of the written word. But you needn’t be looking for new reading material to appreciate it, because it’s also an architectural masterpiece. It was built in 2002, in Alexandria, on the shores of the Mediterranean, the competition to design it having been won by a Norwegian firm. Inside the curved stone and glass structure, multiple mezzanine-like floors are flooded with daylight. Beyond the books, there are four museums, a huge 180-degree panoramic interactive computer screen and six specialised internal libraries, including one each for children and the visually impaired. 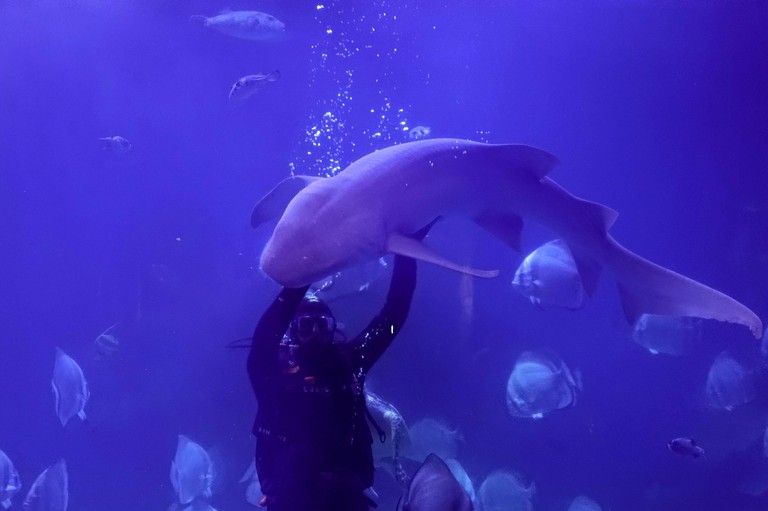 © REUTERS / Alamy Stock Photo
Book Now
What you might expect from an aquarium: lots of water, filled with a multitude of aquatic species. What you might not expect: a rainforest, a fossil exhibit and a mini zoo with live animals. But that’s the Hurghada Grand Aquarium, Africa’s largest, where expectations are invariably trumped. The most impressive feature, however, is entirely water-based. The shark tunnel is a pedestrian glass walkway through the middle of the aquarium, where you can watch these monsters of the deep gliding gracefully above and on either side of you. 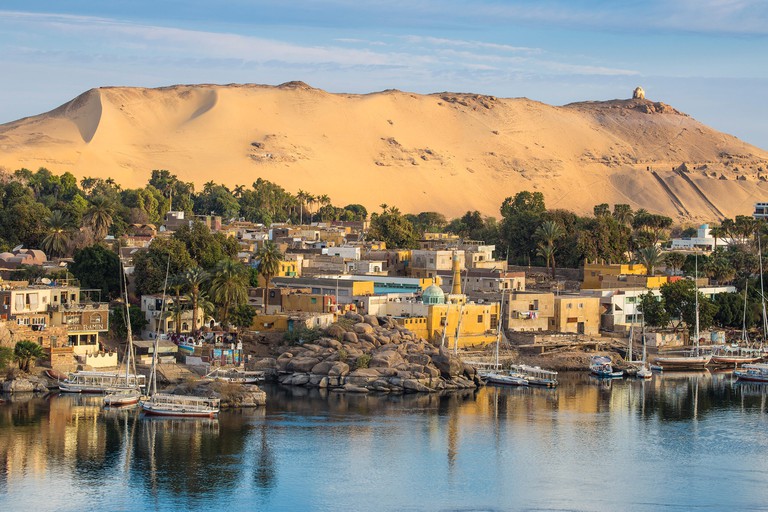 Curving to a point like an elephant’s tusk is this Nile island, one of the largest on the Aswan stretch of the river. According to the ancient Egyptians, it was home to the ram-headed god Khnum, who guarded this portion of the river. You can explore the ruins of his temple at the southern end and even meet him in the island’s Aswan Museum in the form of a mummified ram, among other archaeological finds. Want more time to explore? Check into the five-star Mövenpick Aswan resort, a sprawling luxury pile in the island’s north. 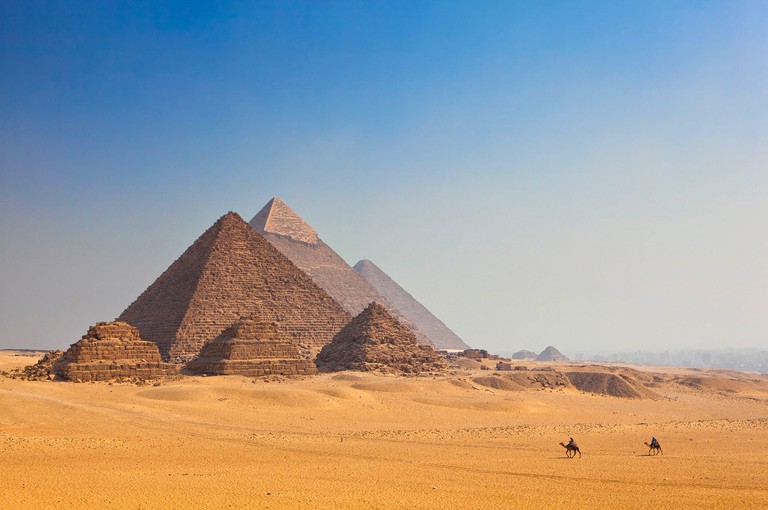 Their scale is dwarfing. At 137m (450ft), the largest – the Pyramid of Cheops – is 41m (135ft) taller than Big Ben. Seen up close, the magnitude and mass of these miraculous structures is jaw-dropping. It is thought they took more than 20 years and more than 4,000 labourers to construct. The cost of building Cheops’ pyramid alone today would easily amount to $5bn. Entering inside is an eerily transporting experience and not for the claustrophobic. 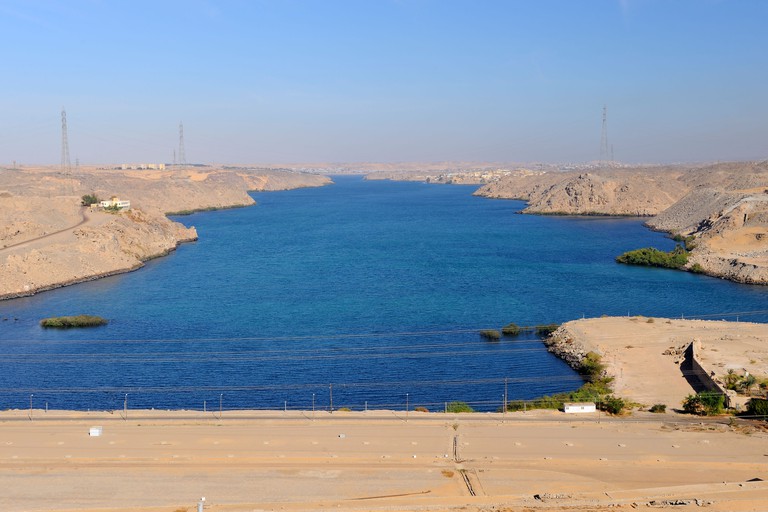 At 111m (364ft) tall and 4,000m (13,123ft) wide, it is the largest embankment dam in the world – unsurprising when you realise it’s holding back waters from the longest river in the world. It was constructed between 1960 and 1970 to help control annual flooding further down the Nile, allowing for more regulated irrigation – previously, drought and the over-flooding that destroyed crops were just facts of life here. The dam changed everything, allowing for more consistency and efficiency. 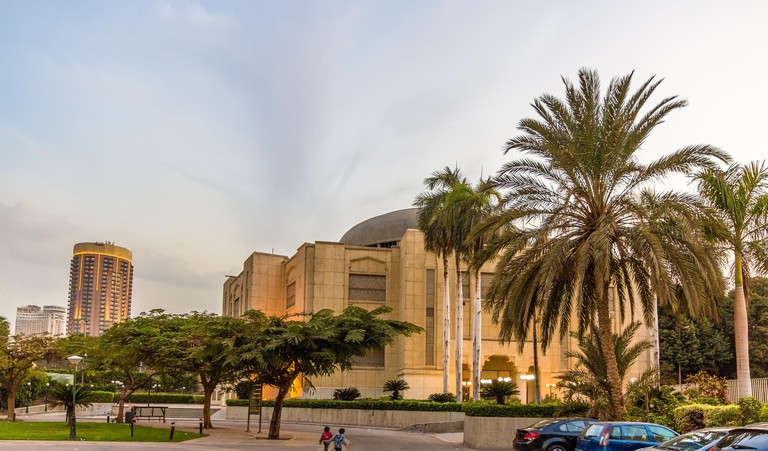 © Leonid Andronov / Alamy Stock Photo
Built to replace the 1870 Khedivial Opera House, which was destroyed in a fire in the 1970s, the Cairo Opera House (unveiled in 1988) is the hub for the performing arts. Considerably larger than its predecessor, it houses seven theatres, a music library, art gallery and a museum. The calendar for performances, from films screenings and poetry readings to live instrumentals and operas, is chock-a-block, so you’ll be able to take your pick when you visit. 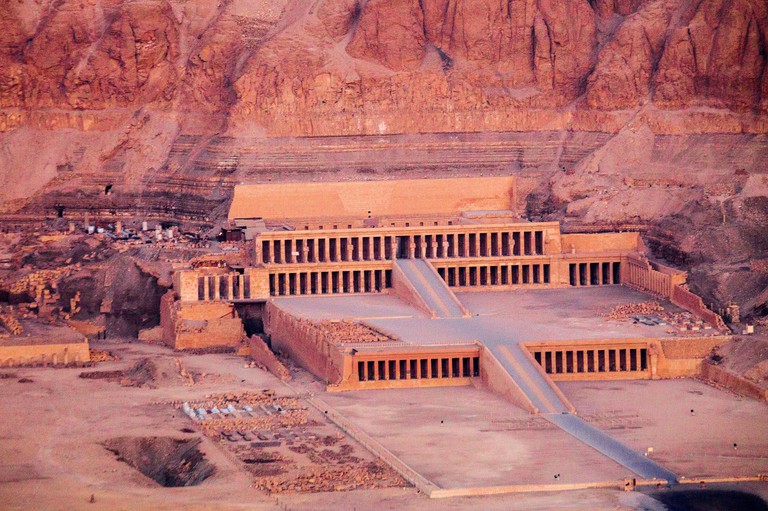 Emerging from the towering, jagged cliffs at Deir el-Bahari, this temple has a crispness and symmetry that belies its antiquity, being built more than 3,000 years ago. In the intervening period, the temple was mostly reduced to rubble by weather, earthquakes and deliberate destruction. But it has been brought back to life by a Polish-Egyptian team of archaeologists and conservationists. 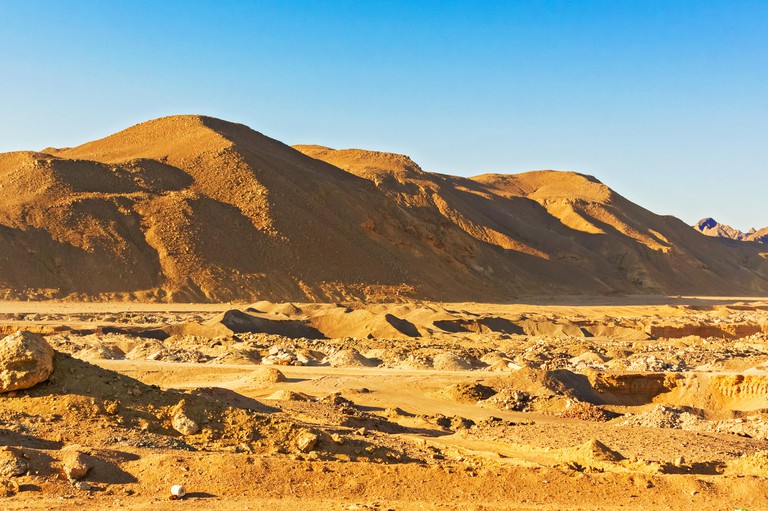 This scorching expanse, sandwiched between the Nile to the west and the Red Sea Mountains to the east, is both a massive outdoor playground and an open-air museum of archaeological sites. If you want to explore it, which you should, you’ll need to book an official tour with a licensed operator, as there are no roads accessible to tourists. You’ll get to visit important historical sites such as the Monastery of St Paul the Anchorite and Wadi Hammamat, an ancient mining and trading route, littered with ancient rock carvings and graffiti. In between, you can get your adrenaline kick on a quad-bike safari. 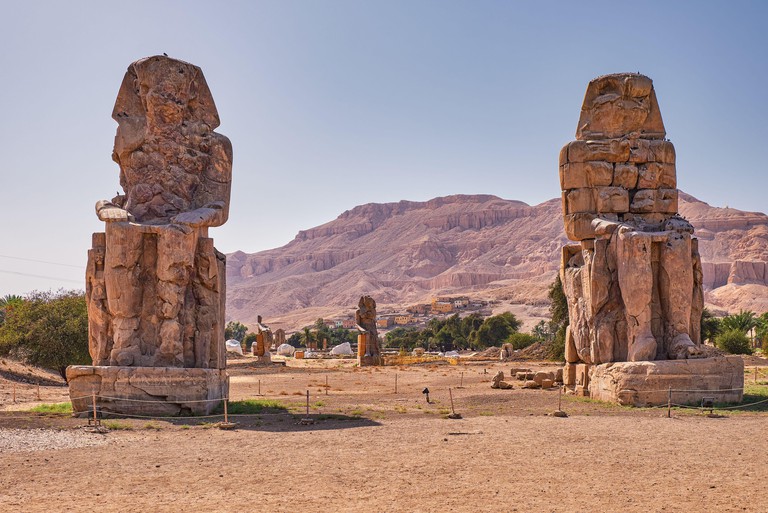 © Mirko Kuzmanovic / Alamy Stock Photo
These two gigantic statues of the pharaoh Amenhotep III are all that remains of a huge temple mortuary complex rivalling anything else in Egypt at the time. It was created by Amenhotep so that he could be worshipped as a deity while alive. It was short-lived – two earthquakes in close succession, combined with Nile flooding, demolished the temple. The statues were reconstructed by the Romans, who discovered that one of them made a mysterious sound, like the plucking of a lyre string, at sunrise. They became major attractions as a result – and still are today. 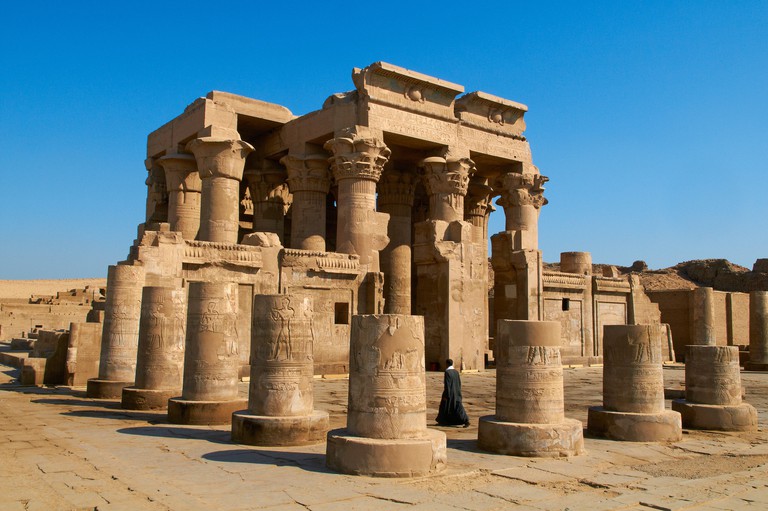 Egypt isn’t short of ancient temples, but how many have offered up 300 mummified crocodiles in the course of archaeological work? This is an unusual and lovely temple, right beside the Nile, built in dedication to both the crocodile god Sobek (hence the reptilian finds) and the falcon god Horus (or Haroeris). Despite withstanding seasonal flooding over millennia – and lacking a roof – Kom Ombo retains a number of beautifully preserved friezes, reliefs and carvings. You’ll also find a shadoof (an ancient well) and statues, some only recently discovered. 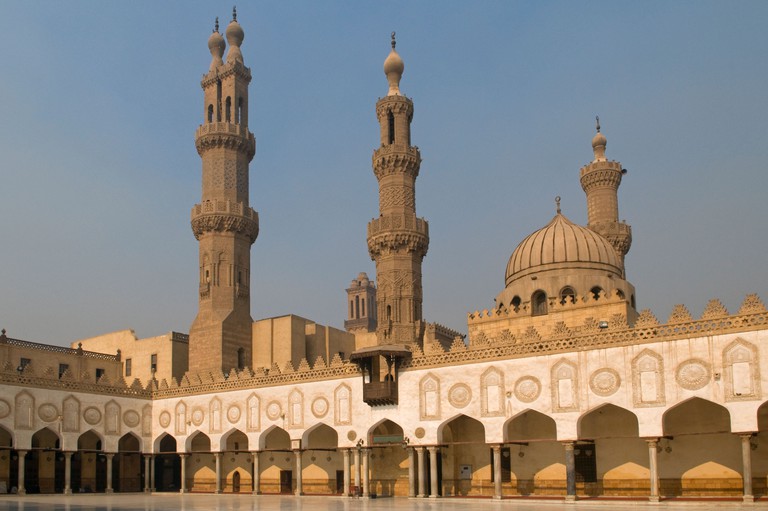 © travelpixs / Alamy Stock Photo
In Cairo, the City of a Thousand Minarets, the first to rise into the sky belonged here, part of Al-Azhar Mosque: the city’s oldest. It is also the second-oldest continuously run university in the world, specialising in the study of Sunni theology and Sharia law. It’s an architectural marvel, resplendent with intricately decorated domes and courtyards; you’ll find a guided tour is the best way to get to grips with its history, ensuring you don’t miss any of the extraordinary architectural details.
Give us feedback