Traditional Souvenirs to Buy in Egypt 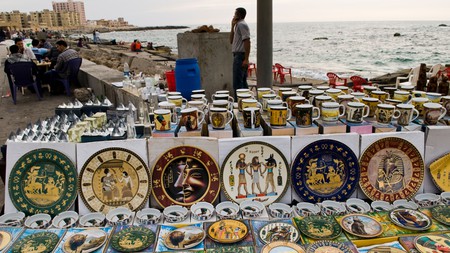 If you're looking for a souvenir in Egypt, there are many stalls to explore | © Boaz Rottem / Alamy Stock Photo

Egypt is home to some of the most recognisable monuments from the ancient world and a trove of modern cultural treasures as well – so you won’t be hard-pressed to find a souvenir or two. But what should you look to buy in Egypt? Here are a few traditional souvenirs you could pick up on your trip here.

Their larger siblings are a defining symbol of the country, so mini pyramids are one of the most popular souvenirs to buy in Egypt. And it’s no wonder, the Great Pyramid of Giza is one of the most-visited attractions on the globe and is the only surviving Wonder of the Ancient World. Since the two smaller pyramids, Khafre and Menkaure, are ancient attractions as well, you can get a whole miniature model as a souvenir. Other mini representations of Ancient Egypt, such as the Sphinx, are a hit as well.

Another item of Ancient Egyptian origin – and a much-bought souvenir in Egypt – is the papyrus scroll. Papyrus was the paper used during the Ancient Egyptian era and was made from the pith of the papyrus plant. Of course, the scrolls sold nowadays are replicas; however, they’re pretty cool and look real. Papyrus scrolls differ in size and have a variety of designs printed on them, from pharaonic battle scenes to the hieroglyphic alphabet. 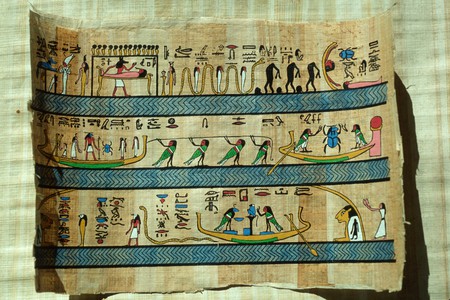 Ancient Egyptians wore amulets in the shape of scarab beetles (dung beetles) as scarabs symbolised rebirth in their religion. Today, you can find representations of the insect in a huge range of sizes, colours and materials; some engraved with the hieroglyphic alphabet. Scarab bracelets and necklaces are also popular here and many visitors wear them as a reminder of their trip. 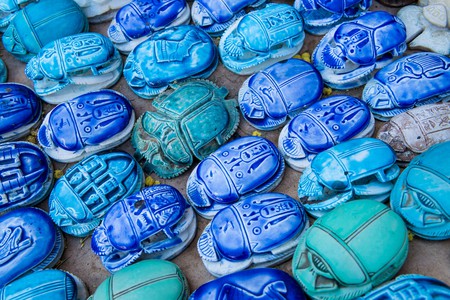 The cartouche, an oval with a name inside written in hieroglyphs, is another souvenir inspired by the Ancient Egyptians. You can find them engraved on many Ancient Egyptian temples. Today, they are sold on different materials, such as alabaster and stone, as souvenirs for tourists. As the silver industry is huge in Egypt, you can also buy them on silver necklaces, with your name written in the hieroglyphic alphabet.

The jalabiya is a cultural and traditional outfit, with loose-fitting fabric, for men and women. Although you may not find many people wearing them in Cairo, you will find people in most areas outside the capital still wearing them. The designs and styles differ in each governorate – some are colourful and others are black with vibrant embroideries. Jalabiyas for men are usually basic and come in light or dark colours – you will find them in many stores and bazaars.

Considered Egyptian in origin, belly dancing is an Arabic expressive dance. It is often a feature of black-and-white Egyptian movies but has developed over the years. While the outfits come in different styles and colours, all are designed with shiny, glittery embroidery. 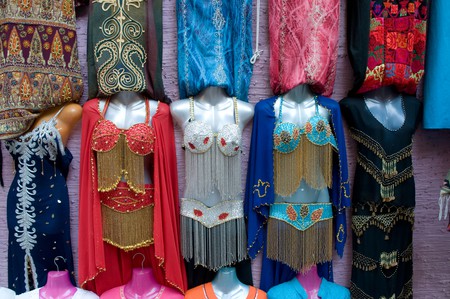 These Arab-style jewellery boxes are popular in Egypt and sold in many places. They come in different shapes and sizes and are designed with Islamic geometric patterns – similar to those you will see on many historical Egyptian landmarks. In fact, the existence of geometric patterns in general can be traced back to Ancient Egyptian times.

Vibrant, handmade leather slippers line the shelves of many Egyptian bazaar shops. What really makes them a souvenir is when they have the pharaonic symbol, which always appeared on deities in the Egyptian pantheon. They’re a great gift as they’re practical, but they represent the ancient side of the country as well. 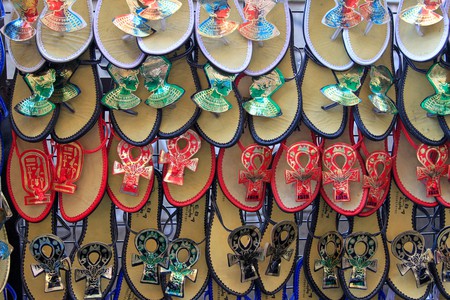 Creating art with different coloured sand poured into a glass bottle is one of the oldest crafts in the country; the sand often taken from Egyptian desert. Although many street vendors sell these handmade items, they are most popular in cities such as Dahab, Luxor and Aswan.

Egypt is home to diverse cultures, so you’ll find a range of clothing across the country. These include hats, some of which are still worn and others that aren’t. A type of hat that many visitors buy as a souvenir is a Nubian hat. These are found in Nubia near the city of Aswan and are still worn by Nubian men. They can also be found in the bazaars of Cairo, including the Khan el-Khalili market, which you can visit as part of Culture Trip’s specially curated 10-day Egypt adventure, led by our local insider. Another popular souvenir hat (one not worn anymore) is the tarbush, also known as the fez. The tarbush, a Turkish inspiration, was worn by Egyptians, including the Egyptian army. 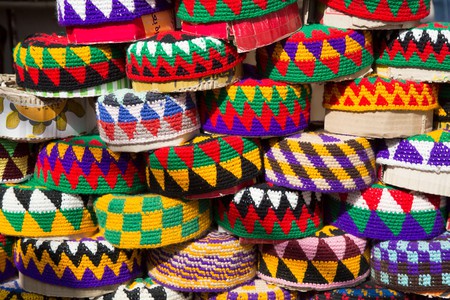 If you’re looking for a hat to take home with you, head to the local bazaar | © Richard Maschmeyer / Alamy Stock Photo
Give us feedback