The Zaire School of Popular Painting: An Art of Independence

The Zaire School of Popular Painting emerged as an artistic movement in the 1970s, and has since tracked the vibrant life of its capital, Kinshasa. The work of its members, leading African artists Chéri Samba, Moké, Chéri Chérin and Bodo, boldly displays the challenges of modern sexuality, conflict and politics in what is now the Democratic Republic of Congo. 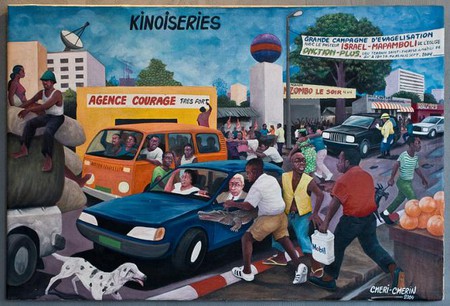 Bright blocks of color depict crowds, nudes, bars and car crashes with little regard for perspective or depth, while spidery words crawl over entire sections of some paintings. This is the work of the DR Congo’s School of Popular Painting, which sprung up in the wake of the country’s independence to offer a gritty and joyful depiction of life in the country’s capital.

The School was founded by Chéri Samba in the mid 1970s in Kinshasa, the capital of what was then Zaire. He was joined by fellow Kinshasa artists Bodo, Chéri Chérin, Moké and later his own younger brother, Cheik Ledy, and the group became one of the most influential African art movements of the 20th century.

The group’s style reveled in the colorful and bold, using text and contemporary reference points to make pointed political statements. Their founding ideology was that art can influence national history and identity, and the work acts as a document of the city’s development through the 1980s and 1990s to the present day.

The term “popular” was taken on as a badge of the School’s mission: to reflect day to day life and popular art. At the time, they were viewed as subordinate to more traditional, Western-influenced fine artists, but their roots in poster painting, street art and advertising signage became their trademark and contributed hugely to their growing popularity. From the 1980s Chéri Samba began signing his work Chéri Samba: Artiste Populaire as a defiant testament to his work’s popularity with and focus on the people of Kinshasa, as opposed to art critics and academics.

With the exception of Chéri Chérin, the artists were largely self-taught, which further explains their disengagement with the mainstream art world. Cheri Samba began his career as a sign painter for an advertising company in Kinshasa, and the craft’s block colors and textual elements survive in his later work. His paintings often feature commentary, painted over the work’s surface in a mixture of languages (French, English, Lingala and a French patois). He was inspired by the use of text in comic strips and the interaction of speech, figures and commentary.

Samba once said that he included this commentary as a way of “not allowing freedom of interpretation” for the viewer — unlike other 20th century artists (the Expressionists or Cubists, for example) Samba felt his work had a direct focus or meaning. This urge to control the way a work was received may have roots in the turbulent political situation in the country, and the desire of the School as a whole to communicate a specific message that could not be commandeered by proponents of other ideologies.

In 1975 Samba opened his own studio in the city, and became influenced by the work of local artists Moké and Bodo. Moké, born Monsengwo Kejwamfi, moved to the city as an orphan when he was ten, and made his living by painting on pieces of cardboard. While he made his name in 1965 with a depiction of General Mobutu on Independence Day, Moké’s style was, in general, less political than Samba’s. The two share their use of bold colors (and Moké arguably influenced Samba heavily) but Moké’s work followed the daily life of Kinshasa, generally avoiding social conflict or political content. Compositions painstakingly pick out every face at an outdoor bar, or show women in extreme, playful outfits.

Pierre Bodo (known as “Bodo”) left high school to move to Kinshasa in 1970. His work, unlike that of the rest of the group, engaged with sorcery (known as “Ndoki Zoba” in the Congo). His style evolved over time to become more and more surreal, often depicting scenes from his dreams or imagination.

Chéri Chérin (born Joseph Kinkonda) gravitated towards the group after studying at the Academie des Beaux Arts in Kinshasa. Even during his studies, he was attracted to the city’s poster-painting and popular artists, rather than the fine art of his training. His busy, people-filled pieces were often painted as murals around the city, allowing the work to interact with the community it depicts.

While the School remains based and largely influenced by life in Kinshasa, increased international recognition has lead to a subtle shift in the artists’ themes and subject matter. Chéri Samba’s international breakthrough came when he exhibited at the Centre Georges Pompidou, Paris, in 1989. Les Magiciens de la Terre was an exhibition of contemporary art which aimed to confront colonial stereotypes perpetuated by previous exhibitions in internationally renowned galleries (Primitivism at the Museum of Modern Art, New York, was particularly controversial). Samba exhibited L’espoir fait vivre (“Hope enables us to live”), a biographical self-portrait which uses painting as collage or documentary to narrate his own path as an artist.

Samba’s work, from that point onward, became more self-reflexive, examining the experiences of a world-renowned African artist. He features in many of his works as a presenter of his surroundings, perhaps displaying a consciousness that the School’s art, while reflecting the everyday and the ‘popular’, was always viewed through the eyes of individuals.

Bodo, too, expanded his focus beyond Kinshasa, delving more and more into dreams and fantasy to make his work appeal more broadly. He said, “I express everything that happens to me, so that I am no longer focused on specifically African topics and can address myself to the entire world.”

Moké died in 2001, but three members of the group (Bodo, Chéri Samba and Chéri Chérin) still work and live in Kinshasa today. The Contemporary Africa Art Collection (CAAC) holds the single largest collection of the group’s art, and regularly lends out collections to galleries internationally. In 2008, London’s Tate Modern held a display of eight paintings from the school, which was the first time the gallery had hosted a collection from artists living and working in Africa.