Chéri Samba | The Art Of Telling The Truth

Chéri Samba is one of the most famous African artists. His notoriety both in the West and in Africa exploded between the 70s and 80s, and is strictly linked to his ability to mix a bit of humor with a handful of paradox and deliver truthful messages about his homeland. 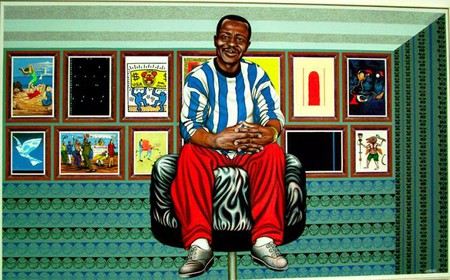 No phone, no emails, or Internet connection, Kinshasa is on lockdown. University students scream, march, get shot and collapse in the streets. In this confusion only one man is standing still, observing the scene, taking notes and finally leaving – Chéri Samba preparing for his new art.

In January, Kinshasa, the capital city of the Democratic Republic of Congo was inundated by political protests. The problems with policy, sexuality, social inequalities, and corruption are also Chéri Samba themes. He was in Kinshasa during the lockdown, working to give birth to new art about what was going on in the city, in the country where he spends half of his life.

If not there, Samba is in Paris, the city that first gave him notoriety. In 1989 he participated in the exhibition Les Magiciens de la Terre (Magicians of the Earth) at the Pompidou Center for the Pigozzi Collection. It was a milestone event for many reasons, the world finally saw his work, influenced by his previous job in billboard painting and comic strips design. He also met curator André Magnin with whom he works until now at the Magnin-A Gallery. A painting featuring himself was displayed for the first time, L’Espoir fait Vivre (Hope makes you live), and he has continued to feature himself since. Born David Samba in 1956 in Kinto M’Vula, Chéri Samba is always in his paintings now.

The reason behind it is far from being an aesthetic one. He had originally painted a man that looked a lot like someone he knew, who complained about this. To avoid misunderstanding, Samba simply substituted that person with himself. This simplicity is one of Samba’s characteristics. It is said that when he went to Milan for an exhibition in 1990, he refused the fancy dinners and instead spent time in his room drinking beer and eating anchovies. Samba’s paintings also are simple in the way they deliver a message. In each of them the image is never enough, everyone is supplied with a cartoon bubble, in English, French or Lingala (one of the four DRC languages) speaking something more on the subject. You might see a naked woman portrayed with bright colors (nudity is often considered a scandal in the DRC) and a cartoon bubble saying “Don’t look!”

Contrast and humor are other two characteristics of Chéri Samba. The perfect recipe for him is a mix of humor and truth, it is the way he produces shock and says what most people don’t want to. ‘I do what I do for young generations’ said Samba to Lubangi Muniana, former director of the Center for African Art in New York back in 1991, when they first met. Samba was part of the exhibition Africa Explores.

‘Chéri Samba’s work is a pictorial narrative of socio-political facts of his world’ said Lubangi Muniana during a transatlantic conversation. ‘Samba’s style is called Popular Painting or African Urban Painting, I agree with both terms, however the complexity and the vision of Chéri Samba isn’t totally reflected by these terminologies. For instance, who would know that in the city of Kinshasa, excesses and extremes seem to be the norm and that events and men pass like comets.’

Very little is known on African Art, and Chéri Samba offers a window into that and into the continent. André Magnin, who sells Samba’s work for up to 50K, fights to let the world know that Africa is not only about famine, poverty and wars. In an interview for the 59Magazine he said, ‘great artists can always create a certain world, awareness and meaning’. Samba started at 16 years old working on the image to give of the world. That is when he left his father, a blacksmith and mother, a farmer, and his nine siblings to go work in Kinshasa. In 1975 he opened his own studio. Samba’s works today, free of intellectualism and attention-seeking behavior, prove that a painting can indeed create awareness.