This Designer is Reinventing Men’s Clothing for Women in Djibouti 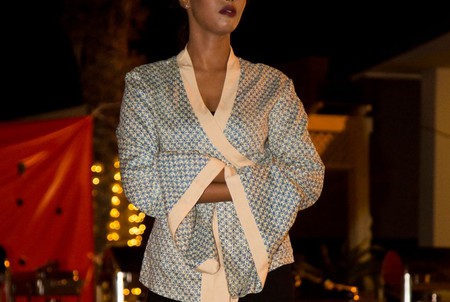 Hailing from Djibouti, Badria Houssein Liban shares insights about her brand, “Gueska Afrika”, carrying a new spirit of fashion into the homes and urban landscape of this tiny yet bustling country.The Djiboutian artist and designer opened up about her experience of making an international brand.

“Gueska Afrika”—the Somali translation of “the Horn of Africa”, which is applied to Djibouti and its neighboring countries that make up the peninsula jutting into the Arabian Sea and Indian Ocean resembling a rhino horn—is a reckless, avant-garde clothing brand on an ever-changing continent. It stands as proof that African fashion is social, fair, and gives a sense of belonging. It unites the cultures of the Horn of Africa, India and many others. In the words of Liban, she emphasises that it seemed urgent in her sense to display the momentum of the creativity and the drive for innovation that “my region entirely embraces nowadays.” Multiculturalism is a key component in Liban’s creations, and she opts to portray this bright tableau of the Horn of Africa in opposition to the images of war, killings, and misery that it are inevitably associated with the area thanks to international media outlets. 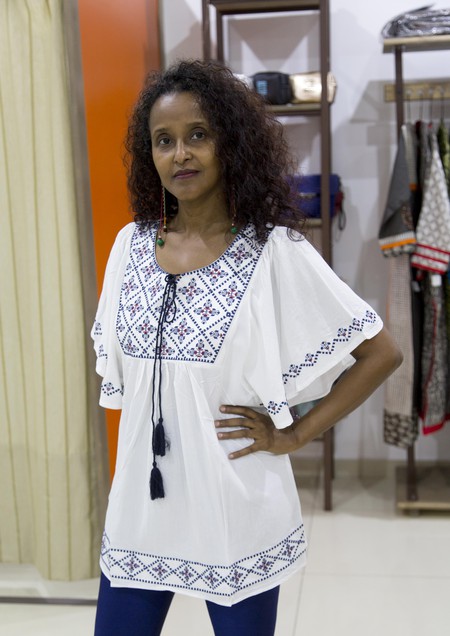 Designer Badira Liban poses in one of her creations

Liban gets inspiration from her dual culture as an African and an Arab, as well as from her permanent exposure to Western culture, in particular French. She also mentions how important it is to open up to the world and to travel in order to broaden her creativity and artistic creation. In this way she finds new patterns, fabrics, colors and styles of couture. When asked about when her passion for arts and fashion started, she proudly pulls out souvenirs from her youth and remembers how she always drew her garments and made them at local tailor shops. She says, “I have always wanted to be different; I love difference and uniqueness.” 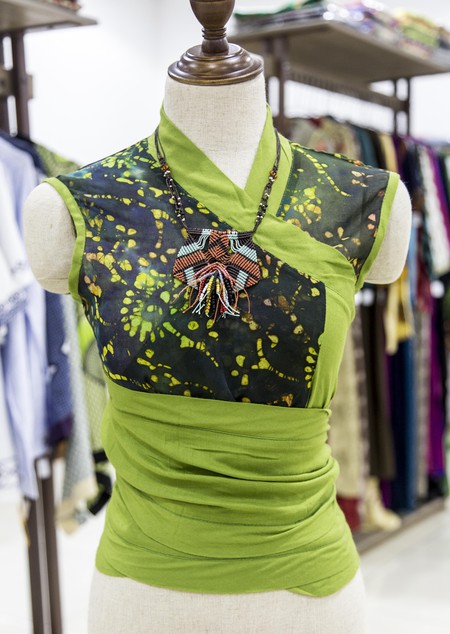 Cheongsam top made out of traditional dirac fabric | © Jean-Philippe Lochon

It all started with choosing an artistic path, and later it branched towards sculpture and fashion. And, always in the spirit of promoting the Horn of Africa region and her culture, Liban recalls that it was extremely natural that she uses colorful, traditional fabrics in order to reinvent their daily use and make them attractive for the Djiboutian youth.

The “futa,” or “maawis,” is the traditional attire for men and is the equivalent of the Scottish kilt. Older versions of it can be similar to a lot of international attire from different cultures and regions around the world. Liban wanted to transform the original fabric into something that can also be embraced and worn by Djiboutian women, which is quite revolutionary for a typically conservative society. 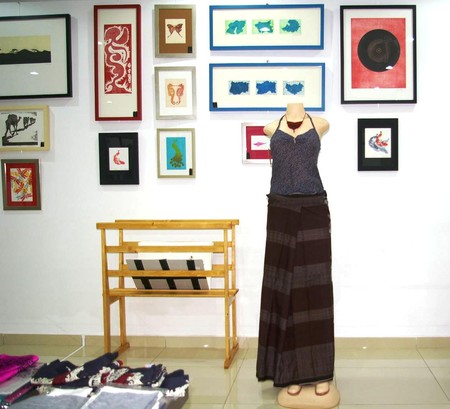 A skirt made out of traditional fabric usually used for the male garment, the “futa” | © Jean-Philippe Lochon

When talking about the process of reinvention, Liban reaffirmed that she revisited the different components of traditional women’s attire. The commonly named “dirac” (boubou), is usually worn for outings, work, and Muslim festive occasions or weddings; the shiide is made entirely out of cotton and is worn indoors as a kind of pyjama, giving the nature of the arid climate of Djibouti; the shalme, or the shaal is usually used to cover women’s shoulders or head for women who choose to do so. Drawing on these, Liban passionately developed how these pieces were reused to create skirts, blouses, shirts, dresses, kimonos, and sarouels, while reflecting the modest character of the Djiboutian way of dressing.

As for the reaction of Djiboutians during her fashion show in Djibouti city last November, Liban recalls with a lot of satisfaction that people were amazed by the products; surprised to see a new way of using traditional fabrics. Liban says, “I can certainly say that, to some extent, it was for me a small revolutionary win to see the reactions, because the attire became unrecognizable in its new shape.” Hence Liban’s creations were positively welcomed and Djiboutian women answered her call to attend the fashion show, and they cannot wait to discover the upcoming collection. 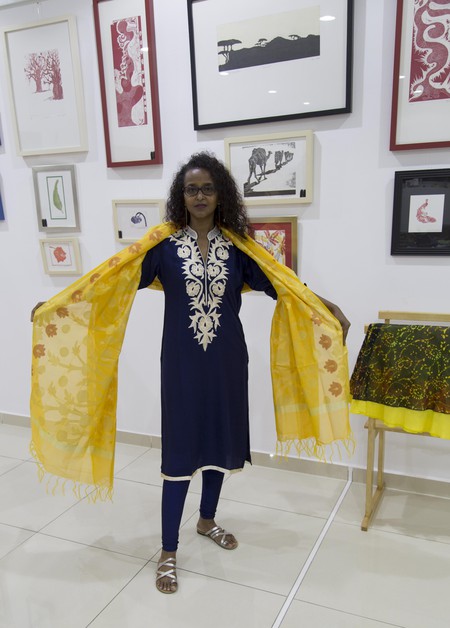 Liban sheds the light on how Djiboutian women were proud to see that one of their own could create an original collection and to see that the fabrics could be worn differently, and in a way that allows more freedom. For the time being, the Gueska Afrika brand targets a diverse community made of women and men. Liban believes that the manner the attire is seen, felt, and worn is changing the Djiboutian mindset. For example, today the dirac becomes practical and adaptable to a modern and dynamic social life for the Djiboutian woman. Traditionally the dirac has the tendency to make a Djiboutian woman forget about and hide her body, but with this new, modernized dirac, women will have more control over their appearance, their body, health, sexuality, and well-being. The traditional way to wear the dirac makes this new process very difficult. Because women’s bodies are constantly changing, the traditional wide dress allows them to hide their curves and shape.

As for the future, Liban wants to consolidate the brand Gueska Afrika in Djibouti and then start planning to export to other African countries or collaborate with designers from the continent, perhaps even sell online. The opportunities are abundant. Africa is an extremely important symbol in Badria’s creations and the wax fabric which features among the material Liban uses hails from countries like Tanzania, Cote d’Ivoire and Ghana, all with their different nuances and colors. “Whatever I create, there will be always a pure African touch to it,” says Liban, proudly. 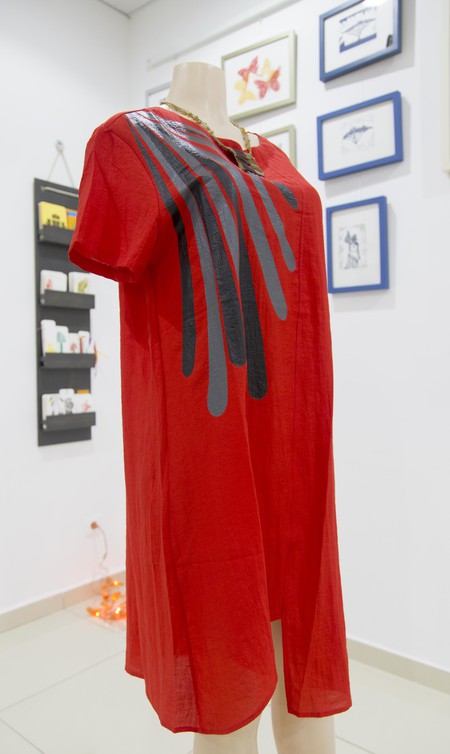 A tunic made of dirac fabric | © Jean-Philippe Lochon

Liban’s creations have received a lot of interest from local media such as the RTD, the Djiboutian TV and radio, who invited her to the “Daryel” radio program about all things original that are being done and made in Djibouti, and she was featured in La Nation newspaper. Liban reaffirms that because of her origins and the fact that she comes from a land of diversity and exchange, she embraces these values and she tries to reflect her acceptance and tolerance towards other cultures, ideas and new concepts, and trends in fashion and design. These values are profoundly rooted in the land of Africa, and the actual renaissance of the continent invites constant innovation, the thing that Liban adopts as a major line in her creations.