The Ultimate Guide to Whale Shark Diving in Djibouti

Whale sharks are magnificent and bewitching creatures that are often found along the Indian Ocean, ending up in Djiboutian waters. Learn all about how to dive with whale sharks in Djibouti.

Djibouti is fast becoming known as a great tourist destination. Its extremely diverse and colourful marine life hugely contrasts with its volcano-like dry mountains rising out of the sea. With over 200 coral species that are mostly native to Djibouti, and the absence of rivers that flow into the Red Sea, have made the coral growth one of the healthiest on earth. Among its diverse marine life are whale sharks. These majestic giants of the sea still baffle marine scientist with their migration pattern. Take for example the story of a random entire shiver of whale sharks popping up off the coast of Madagascar.

There are few things to know before diving into Djiboutian waters: it’s possible to take a boat trip during the day or at night. Obviously, avoiding dives during peak hours of the day is an absolute advantage: it increases visibility and the likelihood of encountering the whale sharks. The average visibility can vary from 5 to 20m (16 to 66 feet), so perfectly suitable for any level of experience. As for diving conditions, Djibouti is known for its strong currents coming in from Yemen and hitting the Red Sea, which can greatly impact the quality of visibility. However it remains possible to experience optimal visibility as you dive or snorkel next to them, which happens to most of travellers. When it comes to diving safety, its imperative to invest in travel insurance for scuba diving as predicting what can happen is understandably impossible.

A day trip with one travel agency can cost around 80$-100$ for snorkeling and USD$90-170 depending on where you want to experience whale sharks. The trip lasts around 9 to 10 hours and the boats depart from Djibouti city.

As tourism is not quite developed in Djibouti, there are only a handful of good dive operators that make day trips, and most are only active during the peak season of the whale sharks’ migration. Rushing Waters Adventures is an American-owned operator that’s been ranked the best in Djibouti. They also run the Djibouti Kayaking Waters. The Dolphin Services is another good company that also offers diving courses. Some major hotels such as the Sheraton Hotel of Djibouti and its partners have a special package including snorkelling and diving for guests. 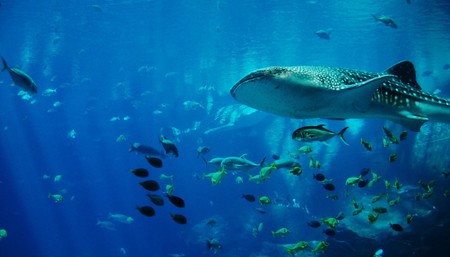 What makes Djibouti such a special place to dive is the long period of time that the sharks remain in the area. However, the best time to spot them is between November and February. During this time the temperatures are mild and the humidity is bearable, and it’s also when they come to the Gulf of Tadjourah looking for plankton found close to the Island of the Devil. This bay is crucial in the development of baby whale sharks that stay confined to the safe waters for more than 4 months.

Like any scuba diving destination in the world, there are some dive sites that are only suitable for experienced divers. Dive sites in the area are diverse, ranging from reefs and caves to shipwrecks and drifts. Whale sharks can be found close to shore during peak season, but they can also be found in deeper waters where operators travel. The best places to spot these majestic fish are:

The Island of the Devil

The Island of the Devil or “Goubbet-Al Kharab” is very rich in plankton. Currents here can reach a greater intensity than 2 knots, making this site perfect for greater visibility of the whale sharks that spend most of their time close to the shore, especially if they have their young with them.

For experienced divers only, the Seven Brothers or Swabi Islands are an excellent site for scuba diving. They are located in the southern entrance to the Red Sea from Bab – Al Mandab. This spot is also an excellent site for open water diving, as there are extremely biodiverse sites nearby.

These islands are mainly known for swimming with dolphins and sea turtles, but they’re also a popular place to spot some whale sharks.

The Crack of Djibouti

The Crack of Djibouti is where you can squeeze inside the triple junction of the Arabian, Somali and the African plates. This area under the Island of the Devil is an amazingly rare site where you can witness frequent earthquakes. Because of this constant activity, faults that were previously open might get closed overnight, old ones become blocked and new passages are opened, making a visit here a once in a lifetime experience.

Djibouti presents the perfect destination for your next scuba diving vacation. It’s still a touristic virgin country which explains the high travel costs when it comes to different activities within the country, but its pristine waters are undisturbed by a surplus of tourists compared to countries like South Africa, Mozambique or Kenya. Because of the strong currents coming in from the Indian Ocean, large marine animals such as whale sharks, pilot whales, beaked whales, sharks, manta rays, and dolphins are more likely to be seen in the Djiboutian waters. It’s also home to one of the healthiest reefs in the world which contains more than 200 species of coral, and this attracts a diverse array of fish. It is also said that grey and nurse sharks are commonly seen, though tiger and blue sharks are rarely encountered. It’s also very common to see entire schools of stingrays, barracudas and even groupers.

Tips on swimming with whale sharks in Djibouti

– Dive during the week to avoid crowded waters over weekends.

– Avoid swimming right up to the whale sharks and keep a 4 meter (13 foot) distance on the side to them and do not touch them.

– Even if the weather is cooler mid-October – February, ensure that you drink enough water and use waterproof sunscreen.

– Watch out for boats that often do not see swimmers.