7 Customs from the Republic of Congo Only Locals Can Understand 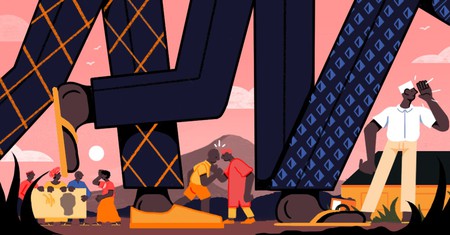 The Republic of Congo is rich in culture with its variety of ethnic tribes. Although certain practices in Congo might be common in other African countries, most remain common only to Congolese people. Here are seven customs from Congo only locals can understand.

Although most people rarely practice this ceremony in the 21st century, many people are still very familiar with this ritual. Sharing a drink with your ancestors is a sign of respect. At a traditional Congolese wedding, for example, the bride’s father or grandfather takes the traditional beer known as “cham-cham” and pours it on the ground. This is a way of sharing the drink with the ancestors so that they can celebrate along with the family. It is also said that by doing this you are showing a sign of respect to your ancestors, therefore they will keep a watchful eye on you on the other side.

‘Moziki’, also known as ‘mutuelle’ in French, refers to a group of people gathering to help each other. Moziki groups usually agree on a specific amount of money that every member can contribute during the month. The money is then saved and given to any group member that has an upcoming event such as a birthday, wedding, funeral, or the birth of a baby.

The aim of the Moziki group members is to help each other in times of financial need. For example, after the death of a member, the Moziki group gather in a local shebeen after the burial to drink, dance, and celebrate. This might be a very unusual way of mourning for most people, but it’s nothing out of the ordinary for Congolese locals. 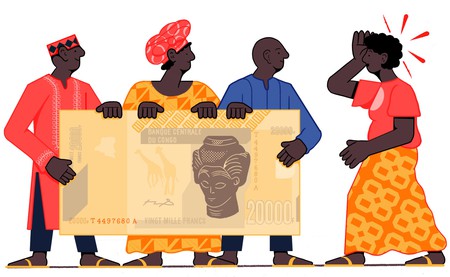 Throwing a child’s baby teeth on the roof

As a child grows up they lose their deciduous, or milk teeth so that the permanent teeth can grow. This is no news to anyone and in most countries the tooth is put under a pillow for the tooth fairy to collect at night. In Congo when a child loses a baby tooth the parents take it and throw it on top of the roof. It is believed that this custom is practiced so that the child’s teeth can grow properly again.

This is not a reference to online grocery shopping on your favourite store’s website. In Congo many women have adapted the habit of grocery shopping at home, literally at your front yard. No need for wifi connectivity or anything; simply grab a chair and take a seat in your front yard. Soon enough there will be a couple of street vendors that parade around neighbourhoods selling groceries such as fresh vegetables, fruit and pretty much anything you might want to add to your meal. The vendors go around the neighbourhood calling out the product that they are selling. If a customer is interested they can call them in their house and the vendor will make a sale, plus the prices can sometimes be negotiated. This method of shopping is preferable to many people. 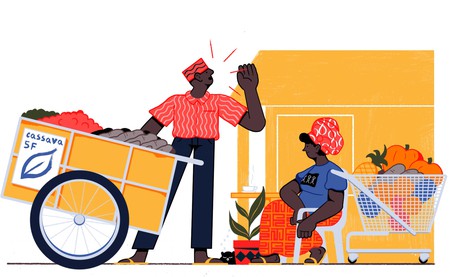 If a woman’s husband is deceased she will have to shave off all her hair. This custom is practiced in most tribes in Congo. The widow’s hair is shaved off by her late husband’s family because it is believed that after the husband is dead his spirit can remain in the wife’s hair. If she does not shave her hair it might bring bad luck, sickness and possibly death. Also, if the widow does not shave her hair it is a sign of disrespect to her in-laws. This custom is practiced in most but not all tribes. In other tribes the widow may keep her hair but must not groom it by adding extensions or dying it. This is not allowed as she is supposed to pay respect to her deceased husband and his family and show people that she is in a grieving state. This process can last up to six months and in some tribes even a year.

Head shakes instead of hand shakes

While handshakes are still a very popular way of greeting, it’s not as common in Congo. When two men meet in Congo they can great each other by simply rubbing their heads against each other side by side. This form of greeting is only performed by men of a certain ethnic group. It is also forbidden for women to greet this way. 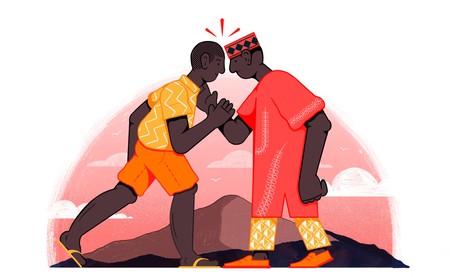 If a man is not ready to be married to his girlfriend but still wants to show her and her parents respect he can arrange what is known as “la presentation“. The presentation is a ceremony that consists of a man presenting himself to the family of the woman he is dating and bringing the family gifts as a way to ask the woman’s parents for permission to date their daughter, but the ceremony is not a wedding. It is usually performed if the man in question cannot afford to pay a bride price. The bride price ceremony is one and the same as the wedding ceremony and can cost thousands of francs. If the man is not financially stable it is a respectable sign to present himself to the woman’s parents and have their approval for the relationship.