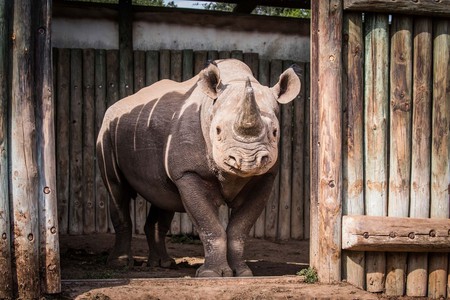 One of six rhinos to be reintroduced to Chad, May 2018 | © Africa Parks / Scott Ramsay

A project is underway in Chad’s oldest national park to dehorn its entire population of African black rhino to deter poachers and save the species.

The black rhino was hunted to extinction in Chad’s Zakouma National Park in the 1970s. Almost 50 years later, black rhinos are being reintroduced in a unique project that will see them go hornless to deter poachers. Dehorning is a drastic approach, but could be key to the black rhino’s survival. 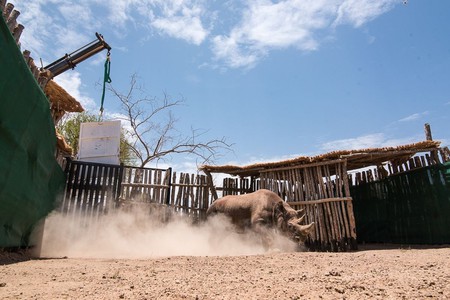 A snort and grunt followed by the thunderous clap of hooves was once a common sound in Africa, but it is now striking in its rarity. Having roamed the continent for over a million years, the African rhino is now facing a critical juncture.

On the one hand, southern white rhinos have fought back from the brink of extinction in the early 1900s to number around 20,000 today, largely in South Africa. Their northern cousins were not so lucky: in March 2018 Sudan, the last-remaining male northern white rhino died, leaving its species knocking on death’s door.

The fate of African black rhino could go either way. Large-scale poaching has seen their numbers plummet from 70,000 in the 1970s to less than 5,000 today, including complete extinction in the Zakouma National Park in Chad. But recent conservation projects have given cause for hope, in particular the unique reintroduction of six black rhinos into Zakouma.

One of six rhinos to be reintroduced to Chad, May 2018 | © Africa Parks / Scott Ramsay

Founded in 1963, Zakouma is the oldest national park in Chad and covers over 3,000 square kilometres. Situated in the mid-zone between the Sahara and Africa’s sub-tropical rainforests, its fertile floodplains and year-round water quickly turned the park into a magnet for Central and West African biodiversity. Yet, its blossoming ecosystem also attracted the most ruthless of predators: mankind.

Rampant poaching saw its famous inhabitants annihilated. Elephant numbers fell 95 per cent from 4,000 in 2002 to just 450 in 2010. The black rhino and the giant eland were wiped out completely in the 70s and 80s. A celebration of biodiversity was becoming a graveyard.

Staring down the barrel of conservation failure, the Chadian Government flung one last throw of the dice, rewriting Zakouma’s history in the process.

The rejuvenation of Zakouma

In 2010, the Chadian Government entrusted the management of Zakouma to Africa Parks, an NGO that currently runs national parks in nine African countries. Within two years, they effectively put a halt to poaching in the park, with wildlife populations recovering as a result. Zakouma is now one of the few places in Africa where you can see herds of over 500 elephants.

Their approach was two-fold. First, a major overhaul of security measures, including better-equipped rangers and the introduction of a rapid-response team called the ‘Mambas’. Second, improving local livelihoods by establishing schools, creating jobs and intertwining the park’s success with that of local communities.

With Zakouma once again known as a wildlife sanctuary, the time was right for the return of the black rhino.

Following seven years of planning, six black rhinos flew 4,800km from South Africa to Zakouma National Park in May 2018. Soon after their arrival, their most distinctive features were removed in order to protect them.

Drastic times call for drastic measures and the implementation of a dehorning regime was a key factor in the South African Government sanctioning the relocation. As rhinos are hunted for their horns (which are used as a medicinal ingredient in Asia and can fetch as much as $60,000 per kg on the black market), the theory goes that hornless rhinos would be worthless to poachers.

John Hume is the most successful rhino breeder in the world, with 1,500 black and white rhino roaming his 8,000-hectare estate in South Africa. Every 20 months he carries out a dehorning programme on all of his rhinos, trimming down their horns to the horn bed where it joins the skull (thus enabling re-growth). Dehorning has been key to his success, discouraging poachers, while having no adverse effects on mating.

Zakouma National Park’s six black rhinos have been dehorned. The horns were removed and transported away from the park to a secure location in the nation’s capital. In addition to these security and protective measures, a horn trimming regime will continue on a frequent basis going forward. The dehorning, which was part of the initial plan in caring for these rhinos in @zakouma_national_park , was carried out by experienced vets who took every step to ensure that dehorning was done safely and did not cause any harm to the rhino. This step was carefully researched and planned, and studies suggest there is no long-term or social impact of dehorning, as long as all the rhinos in an area are dehorned. There are fewer than 5,000 wild black rhinos remaining in the world today – which is the result of being heavily targeted by poachers who are killing these animals, who have been around for millions of years, simply for the illegal sale of their horns. In a historic move, the first six black rhinos were reintroduced to Zakouma National Park in May bringing back the species after a nearly 50-year absence. Dehorning them is one of the many security measures we are taking to reduce the risk of poaching. We have spent the last eight years making Zakouma safe for these rhinos, and all the other wildlife in the park thanks to our rangers and community-based conservation initiatives. Together with the government of Chad, our rangers, and the surrounding communities, we are ensuring these rare black rhinos are protected and have an opportunity to breed and thrive for the benefit of future generations to come. Photo: @stevewinterphoto #AfricanParks #RhinoMove #RhinoReturn #Zakouma #Chad #Conservation #SavetheRhino ___________________________ Les six rhinocéros noirs du Parc National de Zakouma ont été écornés. Leurs cornes ont été retirées et transportées du parc vers un endroit sûr dans la capitale du pays. En plus de ces mesures de sécurité et de protection, un programme de taille des cornes sera poursuivra régulièrement à l'avenir.

A post shared by AfricanParksNetwork (@africanparksnetwork) on Jun 20, 2018 at 8:01am PDT

Chances of success at Zakouma

When widely advertised and coupled with good security, dehorning is a proven deterrent for poachers. However, dehorning only works when all the rhinos are on the same page, as otherwise dominance issues can come into play. Zakouma’s small rhino population should therefore be easier to manage and monitor, with all rhinos able to be dehorned in a short time period.

Africa Parks has also introduced specific security measures, such as a dedicated rhino ranger unit and aerial surveillance to protect the new arrivals, so that a critically endangered species can flourish in a new area once again.

If you think of rhinos, a hornless animal may not be the first image that comes to mind. But it’s surely better than no rhino at all. 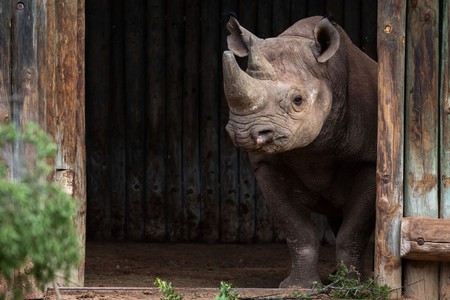