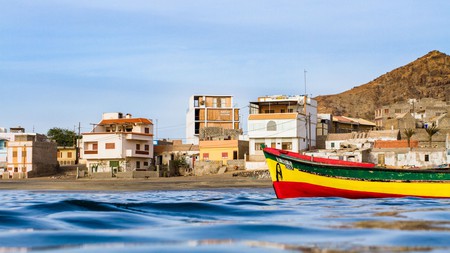 Peaceful by day, pulsating at night, the Cape Verde island of São Vicente is known as much for its natural beauty as its rich music heritage. Hotels here give you easy access to both – here’s our top pick, all bookable on Culture Trip.

Home to Cape Verde’s greatest musicians, São Vicente has a daily rhythm that’s tough to resist. When you’re not enjoying the sound of waves rolling onto unspoiled beaches, you’re in a bar or club in port city Mindelo, toe-tapping to live music while sipping grogue – the local tipple made from sugarcane. The hotels in São Vicente are an extension of the island’s natural beauty and culture, offering magnificent views, eco-conscious interiors and some clever local design touches. 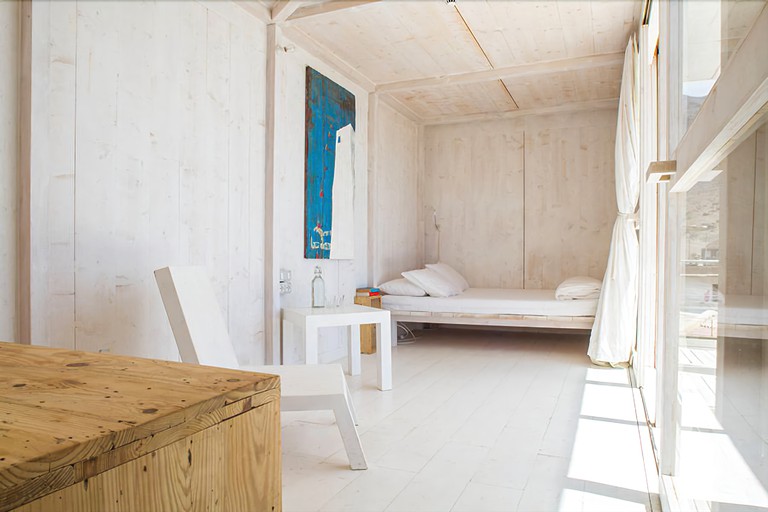 Architect-artist team Ramos Castellano created this innovative addition to the seafront, which blends into its surroundings by mimicking shipping containers stacked on top of each other. The rooms are an eco-warrior’s dream: furniture made from recycled wood, shower water reused in the toilet and aircon provided through cross ventilation. Be aware, though, that Aquiles Eco wants you to unplug. Don’t expect a TV – and wifi is only available in communal areas. 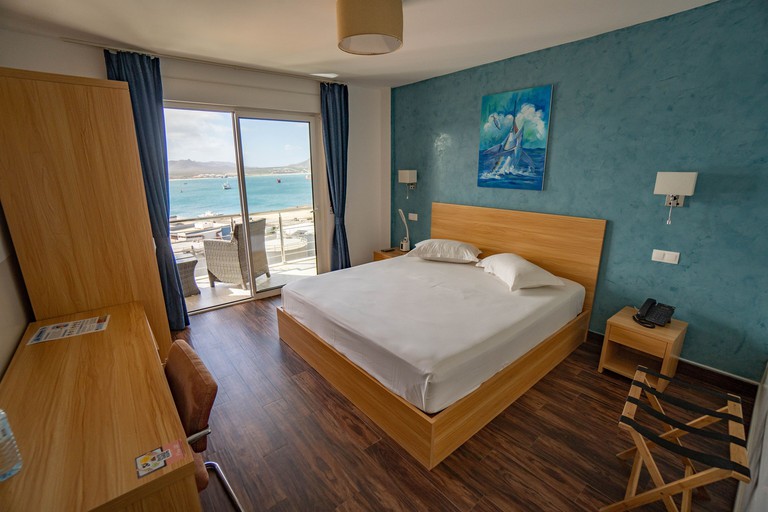 Offering a front row seat to Mindelo’s music scene – and the mouthwatering gastronomy that accompanies it – the Blue Marlin is just minutes from the port and the city’s best clubs and restaurants. Not that it takes a backwards step when it comes to food. The in-house La Calade Restaurant takes delivery from local fishermen and serves up fried octopus, fish soup and grouper in coconut milk – washed down with cocktails as blue as Porto Grande Bay. 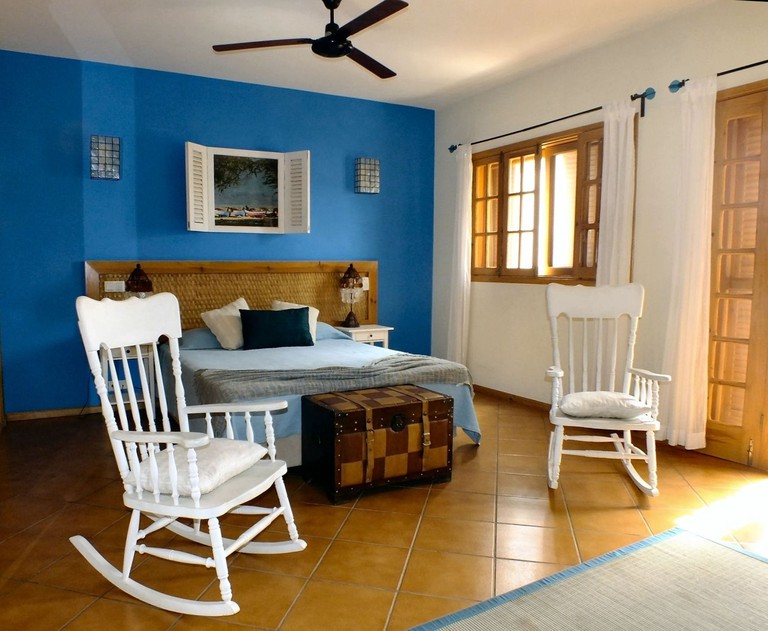 Proudly Cape Verdean, to the point where rooms don’t have numbers but are named after islands in the archipelago, Kira’s in Mindelo allows you to surround yourself (quite literally) with local culture. The individual designs of each room give you a flavour of the place it’s named after, whether that’s the aquamarine waters of Sal or the golden beaches of Boa Vista. The biggest suite is dedicated to the whole of Cape Verde. Those not in the São Vicente room can take in the real thing from Kira’s lovely roof terrace. 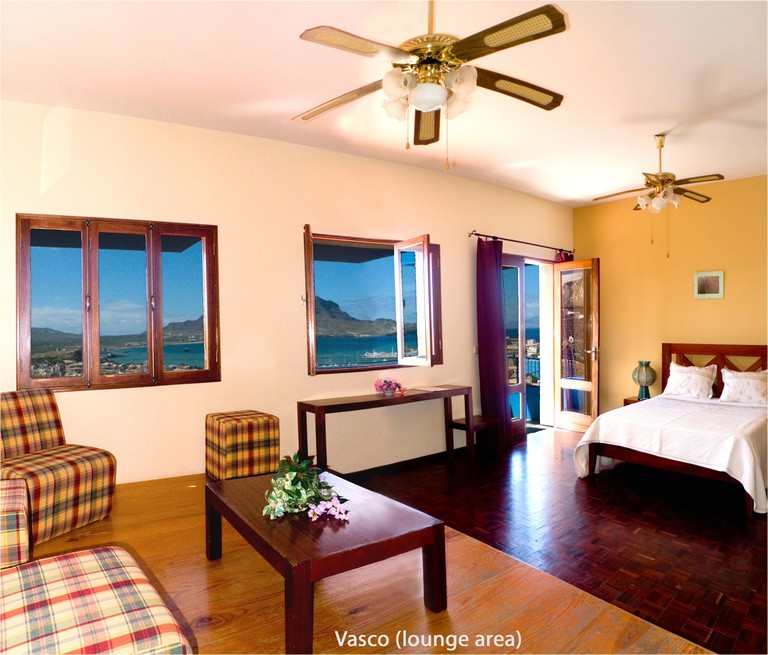 You know a hotel has a great perch when one of the main reasons people book in is the view at sunset. Solar Windelo certainly lives up to its billing as having one of the best vistas over Mindelo, especially from its chequered terrace or the stand-out Vasco suite. The town centre is just five minutes away and the hotel dishes up a healthy breakfast with a side of – you guessed it – unbeatable panoramic views. 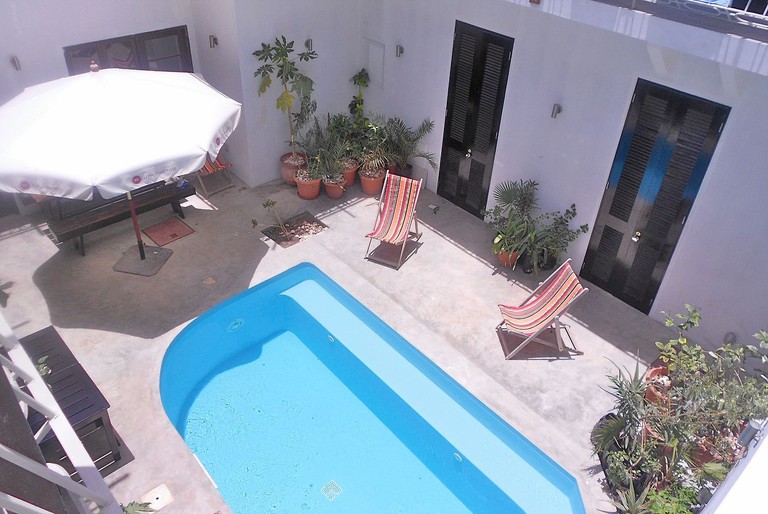 A decidedly photogenic welcomes you at Casa Colonial – one in a row of brightly coloured buildings in a quiet residential street in Mindelo. The charm-offensive continues inside. One of the oldest structures in the city has been beautifully restored by local craftsmen and has handmade mahogany furniture in the rooms. While the private roof terrace offers great views of Monte Cara, Casa Colonial’s best feature might well be its secluded courtyard that comes with a plunge pool. 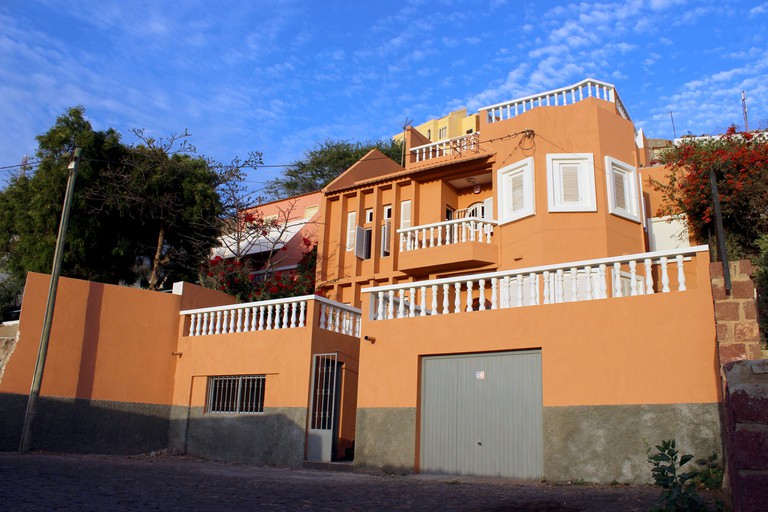 Vila Mira Mar captures São Vicente’s approach of being peaceful during the day and a party-place at night. On one hand, the pumpkin-coloured mansion is a short walk from downtown jazz cafés, restaurants and the heaving Marina Mindelo floating bar. It’s also the ideal base from which to island hop to Santo Antão, with its towering green peaks, volcanic craters and towns clinging to cliffs. Or strike a happy medium, and park yourself in the Vila Mira Mar courtyard with a good book. 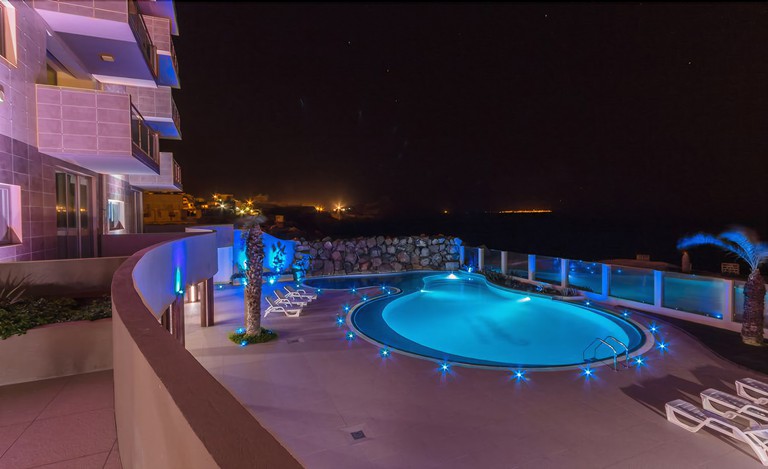 Courtesy of Las Rochas Mindelo
There’s no better place to soak up the rays than Las Rochas Mindelo – a 74-apartment behemoth on Porto Grande Bay. Its sundeck is protected by transparent glass panels to make lounging a pleasure even during the wind-swept days early in the year. The water temperature of its swimming pools is controlled by a solar thermal system, while there is a convenient access point to the sandy beach 50m (164ft) away. 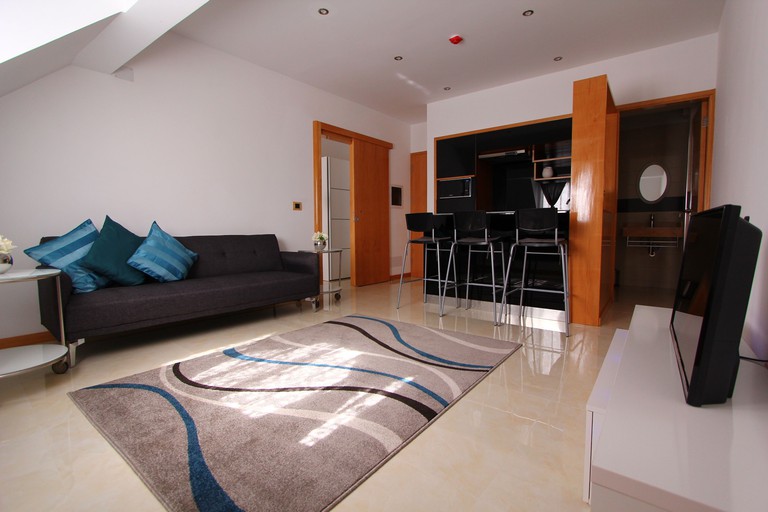 Boutique indeed. The rooms at Moreno’s are on the small side, but have been so elegantly designed that you won’t really mind. And you won’t be hanging out in the room for too long with so much going on right on the hotel doorstep. Moreno’s location in the historic centre of Mindelo means you can tap into the island’s traditions within minutes, whether that’s watching fishermen at work in the Porto Grande Bay or the locals stocking up on fruit at the Praça Estrela market. 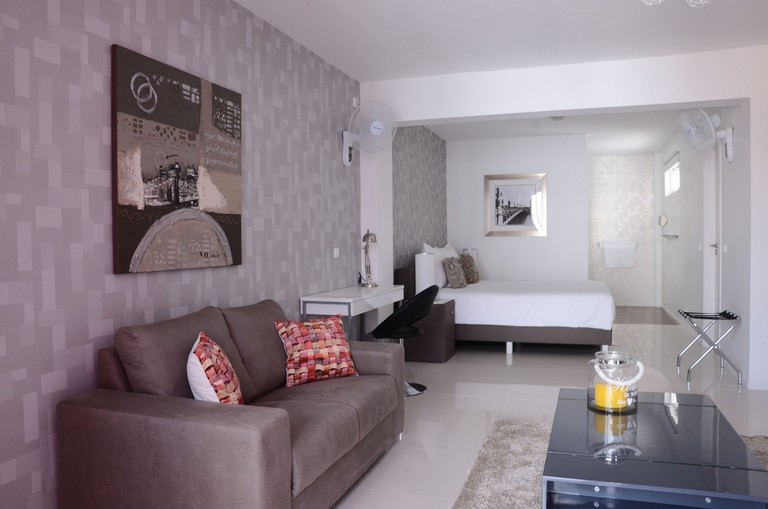 Were it not for Monte Cara looming in the distance, the swanky Prassa 3 could easily be mistaken for a boutique hotel in London’s Soho. From retro round beds and wicker bucket seats, to Big Ben wallpaper and animal-print rugs, the kooky design here is regularly tweaked, meaning that no stay is ever the same. The stylish touches continue in the downstairs snow-white tapas restaurant and a bar, with a glowing blue counter and huge portal windows.

Doing exactly what it says on the (recyclable) tin, Casa Branca Eco Chic takes its design inspiration from nature. Fixtures in the minimalist suites, which all have brown and white tones, include twig lampshades and wooden basins, while the large garden room comes with its own palm-tree patio. The tapas restaurant at Casa Branca is one of the best eateries in Mindelo and, like the rest of the hotel, has décor that’s the epitome of earthy chic.

If none of these take your fancy, fear not – Cape Verde is home to many more hotels and resorts, now bookable via Culture Trip. When it comes to things to do, you’re in luck. You won’t just be headed to the beach here as Cape Verde’s mix of art and culture mean there’s never a dull moment on this island.