10 Fun Things To See And Do In Fuerteventura

10 Fun Things To See And Do In Fuerteventura

Fuerteventura from the interior | © Manu/Flickr
Fuerteventura is the oldest and the second largest of the Canary Islands, situated in the Atlantic Ocean, close to the African continent but retaining their Spanish spirit. Fuerteventura offers many natural and cultural attractions, from enchanting white beaches with clear turquoise waters, to an active nightlife and plenty of sports (especially surfing). Here are our top 10 picks for having fun in Fuerteventura.
Playa de la Concha © Jumilla/Flickr

The most obvious reason to visit Fuerteventura is its 150 km of gorgeous shorelines, with pure sun-kissed sand and crystalline waters as far as the eye can see. The characteristics of the beaches differ widely along the island, meaning there’s a perfect playa for every type of traveler here. The beaches of Jandia are some of the most popular in Fuerteventura: 10 km of white sand and turquoise water located on the South end of the Island. Here the water is a bit warmer than in the rest of the island. Playa del Cofete is probably the most famous virgin beach of the Canary islands, a 12 km sprawl of wild natural terrain. If you’re in El Cotillo, you can’t miss La Concha, a distinctive beach in the shape of a half moon, sheltered by a natural lava reef; here you’ll have a chance to see some of the most amazing rare fish that call these waters home.

This amazing natural park is a must-see in Fuerteventura. The Corralejo Natural Reserve contains the largest dunes in the Canary Islands: they stretch for about 10 km from Puerto Remedio to La Salina, and host an array of protected local animal and plant species. These dunes have an organic origin, as they formed from the disintegration of mollusks’ shells and other sea organisms. The reserve’s beaches are also some of the most popular ones on the island for surfing because of the strong wind. 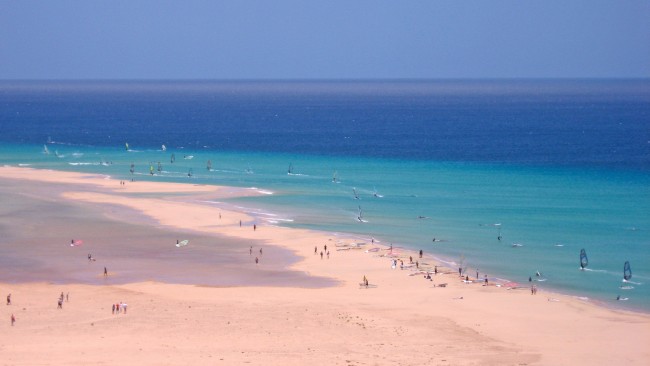 The most widespread sports throughout the Canary Islands are surfing and windsurfing, and Fuerteventura is one of the best locations for both thanks to its strong winds and high waves. You’ll find the best surfing conditions on the western and northern coasts of the island, where the waves are larger. The most highly recommended places for surfing and windsurfing are around the Corralejo reserve and the playa de Sotavento. You’ll also many snorkeling opportunities off the northern coast. If you’re the athletic type and you want to get in touch with the local sporting culture, you can also try your hand at any of the Canarian traditional sports. These include el Juego del Palo, a local martial art form played with a stick (the palo, from which it takes its name), and Canarian boules, which is similar to the French petanque.

Fuerteventura from the interior © Manu/Flickr

Rural tourism is a widely popular option in the Canary Islands and in Fuerteventura in particular, thanks to the low-populated areas of pure natural beauty still found throughout the island. In Fuerteventura, there are many options for rural accommodation where tourists can experience a more authentic stay in a traditional old Canarian house.

Isla de Lobos is a wonderful day trip destination. This little island is located only two kilometers from Fuerteventura and is easily accessed by a ferry that leaves every day from Corralejo on the north coast. Isla de Lobos is a picturesque mini-paradise for fishermen, sun-lovers and adventurers alike. Once home to many monk seals who gave the island its name, the last human inhabitants of this place were the lighthouse keeper and his family, who left when the lighthouse became automated in the 1960s. Today, Punta Martino Lighthouse remains an important landmark for those visiting the island.

For more info on ferries to Isla de Lobos, visit this link.

Museum
South of Caleta de Fuste you’ll find the Salinas del Carmen and the Museo de la Sal, which shows every step of the process of making salt out of the ocean’s waves. There are two complementary tours you can take, one inside the museum, and one outside in the actual sea salt mines. In the museum you can explore the long history of salt, the manifold uses (medical, culinary, chemical, etc.) it’s served across different centuries and continents, and even the traditions, beliefs and superstitions attached to salt by various cultures. This is also a rare chance to learn how salt mines actually work up close and how they’ve provided a livelihood to many inhabitants of the Canary Islands.
More Info
Open In Google Maps
2 Barrio las Salinas, Antigua, Canarias, 35610, Spain
+34928174926
View menu
Visit website
Visit Facebook page
Send an Email
Give us feedback

The Antigua Windmill Craft Centre, located in the town of Antigua, offers travelers the chance to discover the traditional local arts and crafts of Fuerteventura, and also allows you to enter a real molino (windmill) and learn about its original inner workings from the inside. There’s a whole room in the craft center devoted to painting and archaeology, and there are a wide range of activities visitors can take part in as they learn about the folk history and lifestyles of Antigua’s inhabitants through the ages. Be sure to explore their large cactus garden, which is great for a relaxing, quirky promenade. 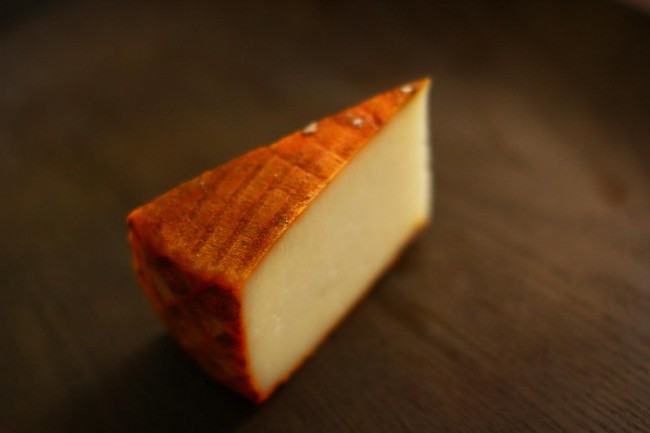 One of the traditional delicacies of Fuerteventura is Majorero, a local cheese made with goats’ milk. The name majorero refers to the particular type of goat whose milk is used for the cheese, and is a Guanche word from the language used by the Berber aboriginals of the Canary Islands. Though the Guanche language is extinct, this name is still used today to reflect the history of Fuerteventura’s populace. Fuerteventura also hosts the Majorero Cheese Museum, in the same complex of the Antigua Windmill Craft Centre.

The Atalayita Archaeological Interpretation Center is the most important and best preserved archaeological site in Fuerteventura. It is located in the village of the same name, in the Pozo Negro valley. Here you can still observe the old aboriginal houses once inhabited by the Mahos, built into caves in the lava wall. Ideal for a family excursion, the Atalayita Archaelogical Center is a must for those interested in the island’s history and anthropology, or for anyone who’s simply curious about a house built into lava!

This curious open-air sculpture park is located in the capital city Puerto del Rosario, and it consists of around 100 different sculptures created by different local artists. Most of the sculptures were created during the International Symposium of sculptures, which is celebrated here annually, meaning that the lineup of works to discover here changes regularly from year to year. The sculptures are set up along a pathway for visitors to explore, which makes it very pleasant to stroll around while enjoying the natural beauty and the manmade artwork in tandem.