When's the Best Time of Year to Visit Cameroon? 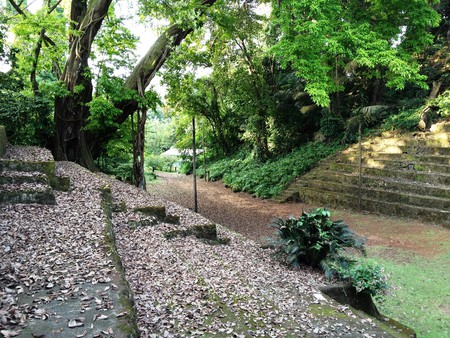 Cameroon is the perfect destination for the road traveller, with wide expanses of forests, hills and plains that will please the nature-loving visitor. The weather is mostly predictable, making it easy to plan around the rainy and dry seasons.

Cameroonians joke about January being the longest month of the year. After the excesses of the festive season, the new year is approached with renewed optimism. Many Cameroonian students live away from home, which makes it difficult to get a bus immediately after New Year. Many families travel home for the holidays, so it’s better to wait until the bus stations empty to avoid long queues. The traffic eases up from the second week of January. It can be dusty and very dry around this period, which is the middle of the dry season. 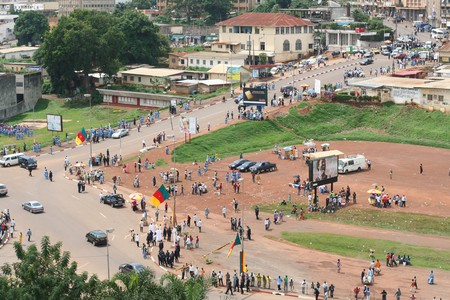 February is a busy month and perfect for the active traveller, with a series of sporting and cultural events that precede Youth Day on 11 February. Youth Day celebrations incorporate parades and performances all over the country. Cameroonians view Valentine’s Day as something that goes beyond romantic love, so 14 February can be a fun day to hang out with friends after work. The annual Mount Cameroon Race of Hope is usually held in February; athletes from all over the world climb to the top of Mount Fako, the tallest mountain in West Africa, and down again. Farmers start to prepare their land in anticipation of the rainy season. 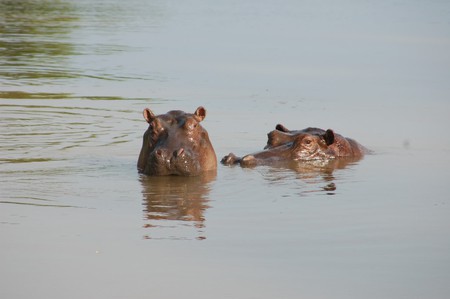 You can see hippos at Benoue National Park | © Ryan / Flickr

With no rains in the Sahel the whole of the great north opens up, making March a good time to go on a safari. Waza National Park is the most popular, but other wildlife reserves in the north of Cameroon, such as Benoue, Faro and Bouba Njida, offer spectacular views. It can be extremely hot in the north during the dry season, yet it presents a great opportunity to learn about the culture and activities of the local people. Christians all over the country celebrate Good Friday and Easter in March. 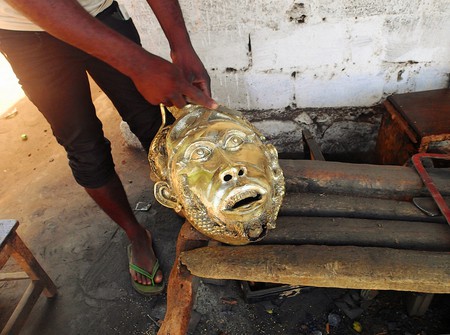 Around this time of year, most of the country is fully experiencing the rainy season, and the rains signal the start of the planting season. Travel can be a bit tedious as students pack bus stations to return for the second term of the school year. The chaos at bus stations is nothing compared to what happens at the end of the year, though, and lasts only a few days before the schools reopen. 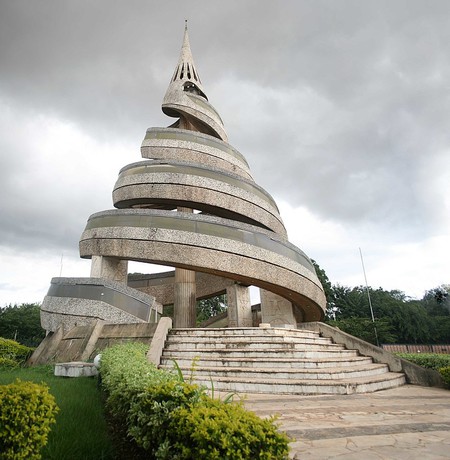 May is one of the busiest months, as Cameroon joins the rest of the world to celebrate Labour Day on 1 May and Christians celebrate Ascension Day. Cameroon’s national day is celebrated on 20 May with parades and events around the country. The marquee event takes place at the Boulevard du 20 Mai in Yaoundé. On less busy days visitors can visit attractions around Boulevard du 20 Mai such as the National Museum and Blackitude Museum. Dine at Boukarou Lounge or enjoy a drink at Le Panoramique. 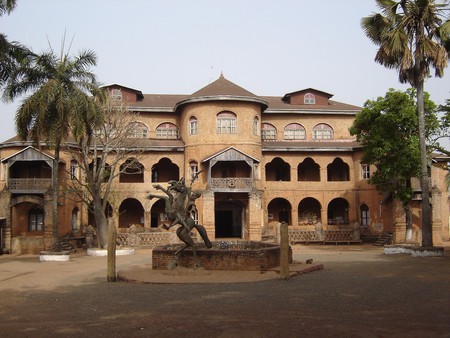 Close to eight million Muslims in Cameroon celebrate Eid al-Fitr in June. Muslims dominate the north and the Bamoun Kingdom, but celebrations can be seen all over the country. The Muslim kingdoms are ruled by laamiibe (rulers) and sultans who wield enormous power. One amazing attraction is the Foumban Palace, the seat of one of the oldest civilisations south of the Sahara. Muslims and Christians in Cameroon have a good relationship and usually celebrate their feast days together. 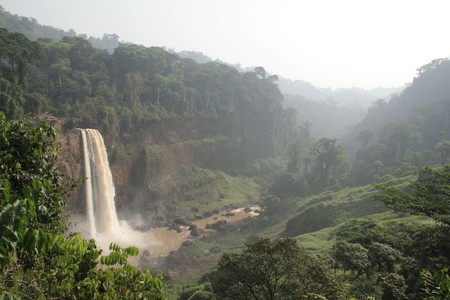 Most of Cameroon sees heavy rain in July, but there’s still enough sunshine during the day to be out in the open. Schools are on holiday and this might be one of the best times to travel, as stations are less crowded. It’s a great time to witness Cameroon’s famous Ekom-Nkam Falls in full force. In places like Douala, Buea and Limbe, the rains can go on for days. Follow the weather forecast, and make sure to carry an umbrella. The Nyem-Nyem festival, which celebrates the resistance against German colonialists, is held in Ngaoundere in July. 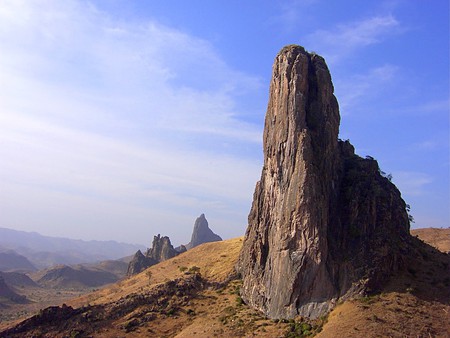 The Mandara Mountains lie along the Cameroon–Nigeria border | © Amcaja / WikiCommons

There’s no chance of the heavy August rains spoiling Assumption Day celebrations in Babanki, a village in the Northwest region of Cameroon. People travel from all over the country to enjoy it with family and support community projects. The celebrations attract outsiders keen to experience 15 August in a place that celebrates it on a larger scale than Christmas. People start arriving the week before to witness the celebrations that go on until Assumption Day, which they call Big Day Maria. Muslims all over the country celebrate Eid al-Adha in August. 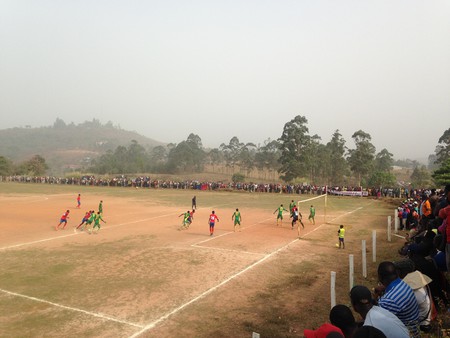 The school year starts in the first week of September, so it’s a very busy period. Getting a ticket is not the easiest thing in early September, so you might want to wait a bit if you don’t absolutely need to travel. Markets and bus stations can be overcrowded, but there’s little traffic at museums, monuments and attractions. 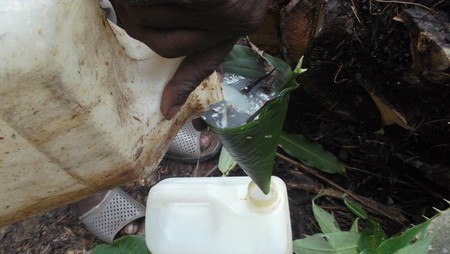 Palm wine is a must at traditional events | © Oshilumbu5 / WikiCommons

You should not spend the first day of October outside if you’re staying in the Northwest or Southwest regions of Cameroon, as these regions in the west of the country celebrate their independence from Britain at this time. Aside from the first week, October is an excellent month to move around the country. 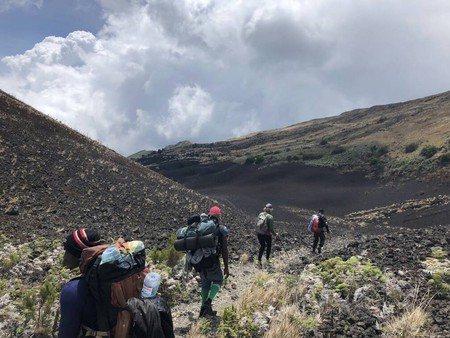 Mount Fako is a popular destination with hikers | © Thompy Ekonde

For most Cameroonians, November goes by quietly, but for the adventurous at heart it’s one of the best months to visit national parks, hike Mount Fako and visit museums. This is grasshopper season and many people go out at night to harvest them. The dust really starts to build up in November, as by now the dry season has fully arrived, and places are hot during the day. Sunglasses are an absolute necessity at this time of year. 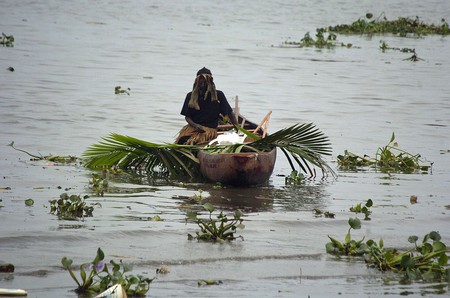 Apart from the long queues at travel agencies, there’s no better time to be in Cameroon than December. This is when most festivals take place, the most popular being the Ngondo Festival, which celebrates the Sawa people on the banks of the Wouri River. Other cultural festivals take place across the country, with thousands of people travelling home to renew their commitment to their ancestry. Weddings, parties, celebrations and graduations are planned around this period to get a good turnout. Christmas celebrations start on the first day of December.

When not to visit

There’s enough sunshine to go about your business in most parts of Cameroon throughout the year. However, clever planning can help you avoid the heavy rains in July and August. It’s also important to know that Cameroon is made up of two regions: the eastern part, which speaks French, and the western part, also known as the Southern Cameroons, which speaks English. There are many cultural differences between the two, so it’s good to have this in mind as you move between the two regions.