Manu Dibango, a Cameroonian saxophonist and vibraphone player, has become an international star for his powerful merging of cultures through music. In addition to being a musician, Dibango has also promoted humanitarian causes throughout Africa in line with his conception of music as a force for social change.

Born in Douala, Cameroon to parents of two different ethnic groups, Dibango always felt divided and, as he stated in his autobiography Three Kilos of Coffee, he felt unable to identify with either of his parents. Coming from an extremely religious family, he first started to enjoy music in church. However, in 1949, when he was fifteen, he relocated to Paris to attend a technical school in Saint-Calais, where he finished three years of high school. He initially drew attention because of his race, but his musical talent soon became apparent. 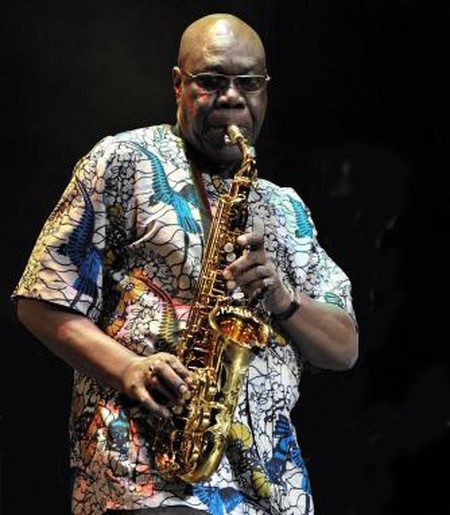 Together with a fellow African expat, Francis Bebey, Dibango started to explore jazz in Calais. His love for the musical genre stemmed from his admiration for pioneering American musicians such as Louis Armstrong, Duke Ellington, Neil Young and Graham Parker. Starting with piano lessons, Dibango moved on to the saxophone. From this eclectic mix of influences, Dibango developed a fusion style that drew not only from traditional Cameroonian music, but also from funk and western jazz. Since then, his taste for adventure has inspired him to explore the globe with his music, living and performing not only in France, but Belgium, Jamaica, Democratic Republic of Congo, and Côte d’Ivoire.

Founder and member (for five years) of the band African Jazz in 1960, Dibango started to receive world attention with Soul Makossa in 1972. Dibango’s music is described as ‘prodigious and multifaceted’, as he truly challenged the borders between musical genres, taking the division into the background and creating a platform for commonality. To this date, Dibango has been internationally recognised for introducing his country’s music into the jazz world, but also for his elemental collaborations with other musicians such as Herbie Hancock, Fela Kuti, Bill Laswell, Bernie Worrell, Ladysmith Black Mambazo, Sly and Robbie and Eliades Ochoa. Dibango has also run nights, directed orchestras, started one of Africa’s first music journals, served as the first chairman of the Cameroon Music Corporation; in 2004 he was appointed a UNESCO Artist for Peace.