Botswana’s Elephants and Where To Find Them 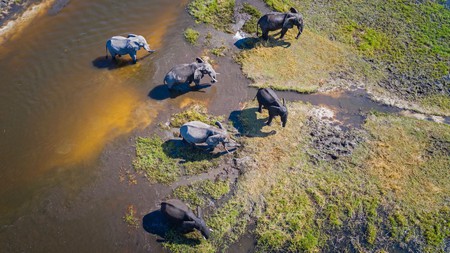 With few physical fences that separate wilderness zones from areas inhabited by humans, the Batswana have lived alongside elephants for centuries | © guenterguni / Getty Images

Botswana is home to Africa’s largest elephant population – 130,000 of these animals (almost a third of the continent’s total tally) help drive Botswana’s tourism industry. However, there are some pertinent pachyderm factors travellers should consider before heading out on safari. 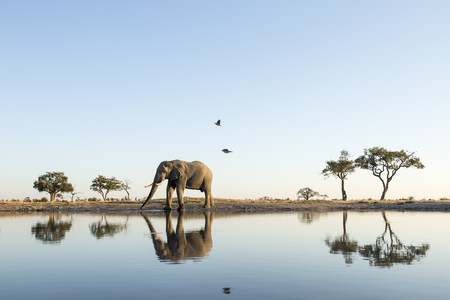 Before the photographic safari, Botswana’s natural spaces were the exclusively preserve of professional hunters, many of whom had moved south after hunting petered off in Eastern Africa in the 1950s. Wilderness areas outside national parks and game reserves were set aside for sports, and the early safari model often involved trophy hunting.

As of May 2019, trophy hunting has once again been permitted in Botswana, after a five-year ban. According to President Mokgweetsi Masisi, the goal of this is to “restore the economic value of elephants to rural populations”. 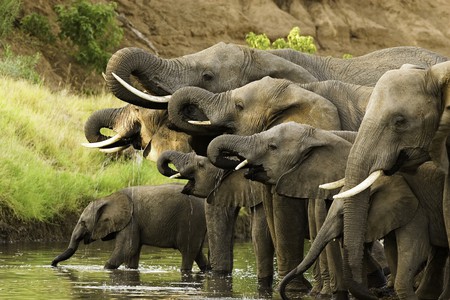 But what does this mean for visitors to Botswana? Clare Doolan, a Botswana Tourism Industry Product Expert from Safari Destinations, explains, “We often forget that the consumers of hunting safaris are international travellers, not Botswana citizens. If we want to create alternatives to hunting, we need other forms of tourism to outcompete hunting as a source of income. That means visiting Botswana, and not just for safari. Spend your money in towns and cities (not just lodges), and on alternative tourism experiences along the way.”

According to the 1992 Chobe National Park Management Plan, elephant densities varied from fewer than 1,000 in the late 1890s (as recorded by the likes of Frederick Courteney Selous, one of the earliest professional hunters in Africa) to an estimated 60,000 during the 1990s. The latest statistics estimate Botswana’s total elephant population at roughly 130,000. 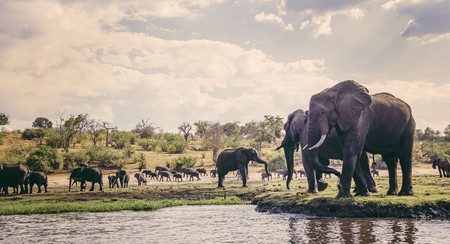 Botswana’s Chobe National Park, like its other parks, is an elephant empire and a conservation icon | © Caiaimage / Anna Wiewiora / Getty Images

Tourism today accounts for a fifth of Botswana’s economy. One reason for its wealth of wildlife is that nearly half the land in Botswana is protected wilderness, but not everyone enjoys this animal affluence. Unlike many conservation areas in Africa, Botswana has few physical fences that separate wilderness zones from areas inhabited by humans. The Chobe enclave in northern Botswana is one such area.

Isaiah ‘Izzy’ Mwezi and Tempe Adams work for the Kasane-based NGO Elephants Without Borders (EWB) to help farmers harvest crops in harmony with their elephant neighbours. 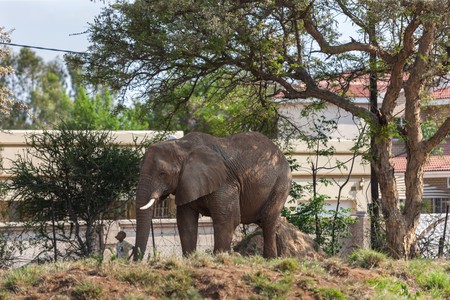 Izzy, the son of a chief, is from Kavimba and grew up in a farming family on the Chobe River floodplains, where people have lived alongside elephants for centuries. “Elephants are very hard to live with, and it’s difficult to farm, but that’s why we have a very important job,” says Izzy.

Botswana is an elephant empire and a conservation icon. It hosts a hearty population, while the rest of the continent is in decline. Africa’s savannah elephant populations have plummeted by 30 percent in just a decade. However, Botswana is not immune. Poaching reports are on the rise, and severe drought presents yet another hardship for Botswana’s elephants – more than 100 elephant deaths were reported in October 2019. As permanent water sources dwindle, humans and elephants are competing even more.

Kasane and the surrounding areas, such as Kavimba and Kachikau, are hotspots for elephant incursions on local farms as both animals and people struggle for resources. 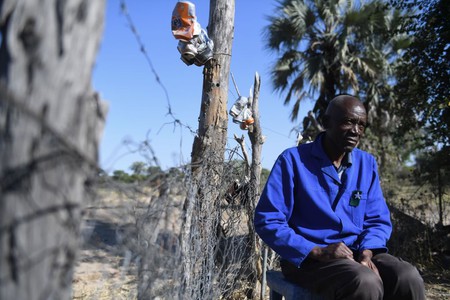 Ishmael Simasiku is one Batswana farmer whose crops were damaged by elephants. Many like him agree with the government’s decision to lift the hunting ban | © MONIRUL BHUIYAN / Getty Images

“People see me as going to the other side, that I stand up for the elephant and not for the traditional way of life. Until I speak to them and explain. My dad is very proud,” Izzy says. EWB works with the community to find methods that deter elephants from raiding crops and so prevent conflict.

Where to see elephants in Botswana

Whether you track them on a walking safari in the Okavango Delta, spot them snorkelling across the Chobe River or simply watch them from a lodge suite in Nxai Pan National Park, there are plenty of ways to enjoy elephants in Botswana’s wild.

Lifting the hunting ban is an attempt at readdressing the generic tourism model – one that often excludes people on the ground who are living alongside wildlife. Here’s how your travels can benefit both elephants and humankind. 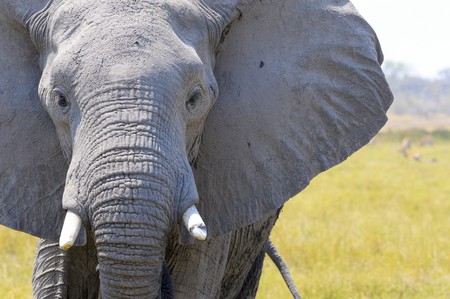 Once the headquarters of ivory hunters, Chobe boasts Botswana’s first national park and remains the unofficial elephant capital. Today, there are more tlou (the Setswana word for elephant) in the Chobe district than anywhere else on earth, and a sundowner cruise on the Chobe River is the best way to appreciate the enormous herds. 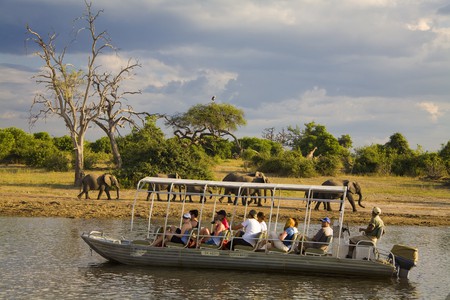 The best place to see elephants is Chobe National Park, once the headquarters of ivory hunters | © Luis Davilla / Getty Images

The best time of year to see elephants is during the dry season; from June to the end of October, growing numbers of water-dependent animals (especially elephants) assemble on the banks of the Chobe River.

To be more considerate of elephants, Tempe Adams advises visitors to conduct themselves in an elephant-considerate way. “Give elephants distance on a game drive, look out for elephant pathways and don’t obstruct those pathways during sightings. If you see anyone violating the rules or see an elephant with a snare, for example, report it to the parks authorities. It would be great to get the support of tourists in reacting to these events. Also, when driving in towns like Kasane, slow down on the tar roads. Put on hazards when you see something, and give them a wide berth to cross.”

Alternatively, join an epic journey with Blue Sky Society that includes a visit to EWB and witness their work firsthand. 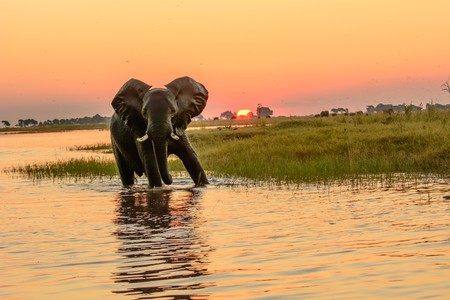 The best time to see elephants is during the dry season, from June to the end of October | © Trevorplatt / Getty Images

This under-the-radar expanse is perfect for those seeking a more remote safari. Both the Chobe and Linyanti systems are listed on the tentative list as World Heritage Sites and form part of a crucial migration route used by African elephants. Straddling the Namibian border, the Kwando River and surrounding elephant-rich marshes offer a more uncharted experience of Botswana. The Linyanti region is also one of the best places to spot the endangered African wild dog.

The best time of year to visit Linyanti is during Botswana’s winter, when animals migrate to the wetlands from the surrounding dry woodlands as the water pans dry up. Check into a stay built on the banks of the Kwando-Linyanti river system to enjoy the elephant herds that concentrate along the water. 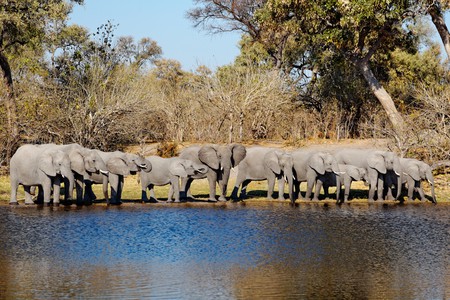 The best safari camps make it a policy to hire staff from local communities. Check if your stay is citizen-owned and ask about the safari company’s social responsibility projects.

An excellent way to see elephants in this watery wonderland is on foot. With an expert guide and tracker, visitors can safely follow and experience this extraordinary creature on their own turf.

Visit in the dry season for best conditions and arrange an on-foot excursion and overnight stay in a secluded fly camp. Moremi Crossing (an eco-friendly lodge on the Boro River) specialises in walking safaris and offers tented adventures in the Okavango Delta – the way explorers have done for decades. 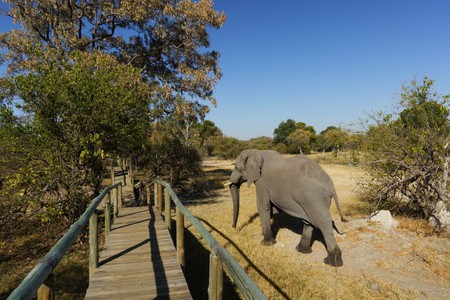 Most visitors travel through the parks of the Okavango Delta on foot, as the original explorers did | © Marka / Getty Images

Another Botswana-based NGO working on human and elephant coexistence is Ecoexist. The organisation hosts a community-run village tour in the eastern Okavango Delta panhandle called Life With Elephants, which centres on educating tourists about living with elephants.

Being water-dependent, elephants are generally not desert creatures. However, happy herds can still be found on the plains of the Makgadikgadi Salt Pans in one of Botswana’s lesser-known parks, Nxai Pan National Park.

Permanent waterholes dot the arid landscapes at this national park, so elephants can remain during the dry season, the best time to visit the park. The main waterhole is good for spotting elephants, jackals and other plains wildlife. 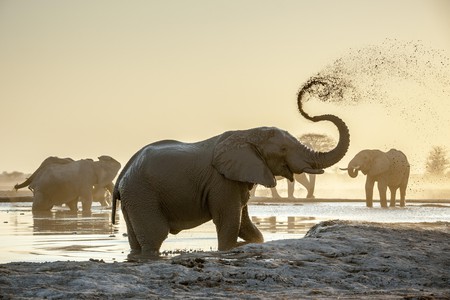 The only permanent lodge in Nxai Pan National Park is operated by Kwando Safaris. The company sponsors the grassroots initiative, Mummy’s Angels, instead of a more typical conservation project. Teaming up with Pack for a Purpose guests can donate baby essentials, such as nappies, clothes, wipes and pyjamas to empower mothers with newborns who have little by way of financial support.

Bordering South Africa and Zimbabwe, the Tuli Block is probably Botswana’s least-known pachyderm paradise. Striking in its distinct terrain (not flat, like the majority of Botswana) it’s best described as a land of giants with dramatic rocky outcrops, scraggly baobabs and of course elephants.

Elephants can be seen here all year round, but are found in larger numbers during January and February – Botswana’s rainy season. Enormous herds numbering 200 congregate to take advantage of the newly green vegetation. The Tuli area is also one of the best places to get active on safari, and elephants can even be seen by bicycle at Mashatu Game Reserve. 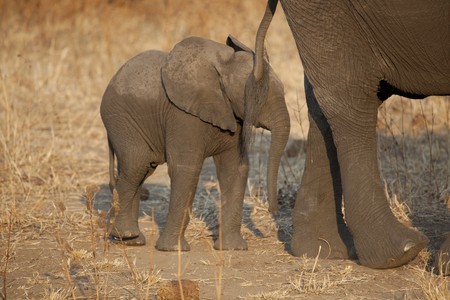 Mashatu Game Reserve, located in Tuli Block, offers visitors the chance to explore the park on a bicycle | © Jacynthroode / Getty Images
Give us feedback