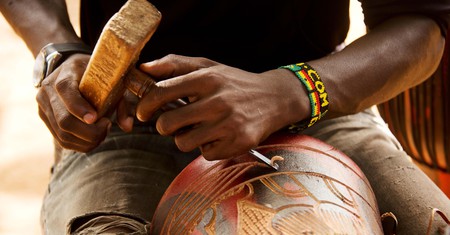 Djembe drums may date back over 800 years, but they are still among the most important instruments in Africa. Although most visitors encounter them at markets or in drumming circles, they still play a pivotal role in the rhythm of the continent.

If you happen to be walking down Cape Town’s Long Street, particularly on a Saturday afternoon, there’s a good chance you’ll hear a cacophony of drums rising up amongst the tightly packed buildings.

Follow the noise to its source and you’ll find a group of beaming tourists with drums between their legs, trying desperately to keep rhythm with the leaders of this seemingly impromptu outdoor drumming circle. Stick around and you’ll see that even the most reserved drummers soon find some kind of respectable beat, and not long after, transition into a kind of meditative trance.

That’s the power of this seemingly simple instrument, that consists of a wooden goblet drum covered in animal hide, tuned with ropes running down its sides.

The djembe drum has its roots in West Africa, with many crediting the name to Mali’s Bambara people, who named it after the saying ‘Anke djé, anke bé’, meaning ‘Everyone gather together in peace.’

Most djembes in West Africa are still hand-carved from local wood using traditional methods, but as the drum’s popularity has spread across the continent, this has changed. In South Africa many djembe drums are now made commercially, using wood substitutes that purists claim impact negatively on the richness of the sounds. Still, for casual performances these are more than adequate, and many enthusiasts start there and trade up as they develop their skills. 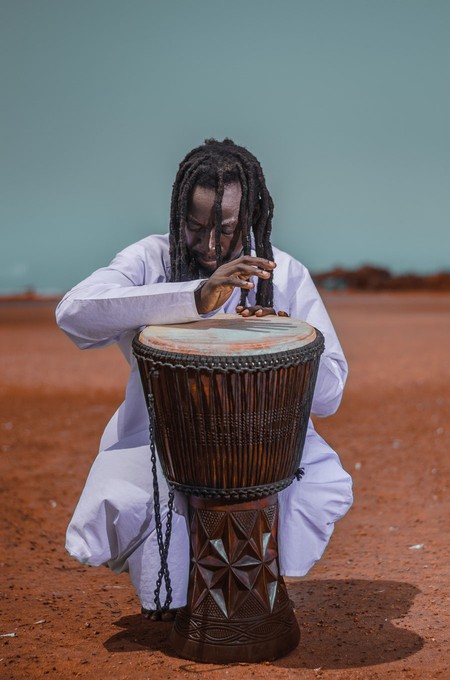 One of the most versatile percussion instruments

Despite its seemingly simple design, the djembe is one of the most versatile instruments of its kind, and many credit its popularity with its ability to produce a wide range of pitches. Skilled players can produce low, medium and high tones with a subtle shift of the hand and striking location. The slap (high-pitched note) is one of the hardest to play, and many regions have their own techniques and variations on how to achieve this.

The strings running down the sides of the djembe also differ in colour and weave, but they are more than just decoration – players tighten these to ensure a crisp sound. The ‘Mali weave’ is the most common of these layouts – it forms aesthetically pleasing diamond shapes on the sides, and allows the drum to be tuned to high pitches. As the tension in the skin changes due to natural wear and tear, the player can retighten the strings to ensure a good sound. Eventually, the skin will become so stretched it is no longer usable, or it will rip, in which case it can be replaced.

The drum has had many uses over the decades, and it plays an important part in many spiritual and ritual traditions throughout the continent.

Traditionally, drums were used as a form of long-distance communication between tribes based far apart, and for storytelling and entertainment. The djembe’s primary purpose was for storytelling musicians to pass on important religious, historical and cultural messages, often across multiple generations. Musicians also play specific songs depending on the occasion – some are kept specifically for weddings, births and funerals, or for calling for rain or good harvests.

The djembe’s entertainment factor is still one of its biggest drawcards, as is the physical exertion required to beat out a consistent rhythm. Although it’s an intricate instrument that requires skill to master, even those who’ve never played a drum can learn to hold a beat with their fellow players – hence their growing popularity in tourist centres, at corporate events and even wellness retreats. 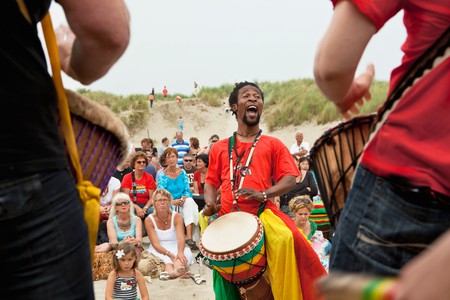 Their place in popular culture

The djembe has also transcended traditional uses and found its way into popular culture. Several master-djembe players like Mamady Keita, Adama Dramé and Soungalo Coulibaly are known across the continent for their abilities, and the instrument has also been integrated into Western popular culture, appearing in ballets, films and recordings by notable artists such as Paul Simon.

Although it’s easy to view the djembe drum as a vehicle for lighthearted entertainment, its long history, build quality and deep cultural ties are ensuring its longevity, and securing its role as one of the continent’s most important instruments.