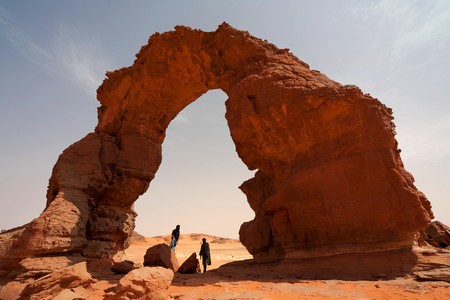 Tuaregs under a stone arch in the Tadrart Acacus in southwest Libya, part of a mountain range which stretches into Algeria | ©Sunsinger/Shutterstock

The Tuareg writer, whose short story “Margins” is included in our Global Anthology, spoke to us about his art, the peoples of northwest Africa left country-less by colonialism, and the Berber roots of socialist libertarianism. 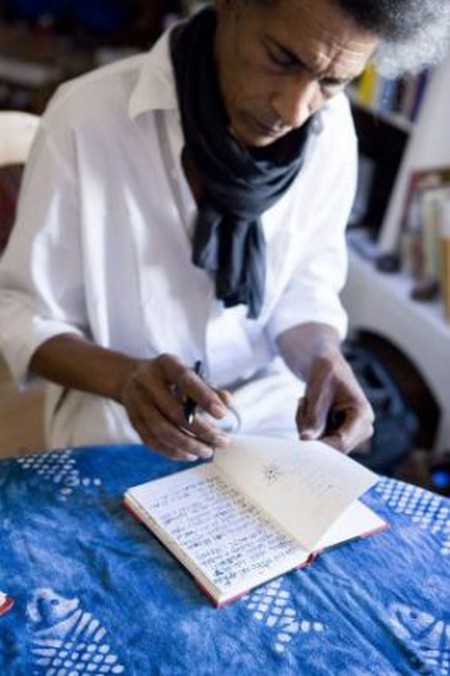 Poet, painter, playwright and fiction writer, Hawad is one of the foremost representatives of Tuareg literature—and indeed art—today. Born in the Aïr Mountains in the Sahara (in what is now northern Niger), he traveled in his youth to study in Egypt and Iraq, before working as a day laborer in Libya and Algeria in the 1970s, where he first began writing. His concurrent political engagement, as much a matter of circumstance as one of choice, led him to form resistance movements with fellow exiles, as a consequence of which he had various spells in Algerian, Libyan and Nigerien prisons (all States, with Mali and Burkina Faso, through which Tuareg lands historically stretches).

As well as being the author of a dozen books of poetry and fiction, Hawad has had his artworks shown in various cities around the world, from Paris to Casablanca, New York, Medellin, and Rotterdam. He lives today in the south of France with his wife and French translator, anthropologist Hélène Claudot-Hawad, through which this Q&A was conducted. In his answers, the writer reveals the links between his people’s experience at ‘the margins’ and his art, including the form of ‘furygraphy’—which he invented, and features calligraphic art from poetry written using the characters of his native Tamazight language (known as the Tifinagh script).

Culture Trip: Your short story, “Margins”, follows characters and peoples—the Tuareg, Songhai, Hausa, etc—living between the artificial borders of five post-colonial states. Can you tell us a little more about that situation, and how it influences your writing?

Hawad: The vast Sahara-Sahel area was ‘irrigated,’ in all senses of the word, by the art of creating networks of exchanges, of solidarity and of shared interests between communities with different languages, cultures, ways of life, and competences. This ability to weave links between worlds modeled a kind of man who is neither from the Occident, the Orient, the north or the south, but is a man-bridge, a creative man, that knows how to create original cultural syntheses. It is this nomadic imagination—dynamic and alternative, this staging of plurality in movement, that I put in play and which inspires my stories. A plurality condemned and mutilated by those States heirs to European colonization.

CT: In a number of places, you describe these peoples as being at the tip, the forward edge of the world (“spurs of the universe’s movements”). What do you mean by that?

H: These characters have the key to several worlds; they are at the crossroads of several cultures whose subtleties they master, and know of in their differences and complementarities. They are for me the embodiment of free men, the tip of the needle that links the weft of the universe, the vanguard of thought and culture in all that is open and non-dogmatic. They are for me the only way of sketching the future.

CT: Your style and language are extremely poetic, and so plays a lot on imagery and rhythm. Why do you use this stylized language, and what is the ideal, or goal, of this writing?

H: I don’t think there is a clear divide between my writing and the language I use every day. The imagery I use, the rhythm of hurt and of shock in my words, the voices of my surrealist characters from the margins, are tools designed to force the imagination. There is here neither mannerism nor affect, only an attempt to find a language capable of multiplying significations, visions, horizons, to evade the established order and ready-made thought… 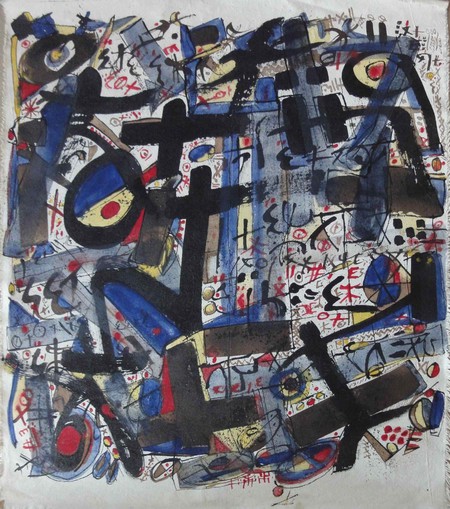 An example of furigraphie: Toile 53 (canvas #53) | Courtesy of the artist

CT: As both a poet and a painter, you created your own genre, or method, of art—furigraphie (furygraphy)—which mixes the two forms. Can you tell us a bit about it?

H: When you are surrounded, oppressed, muzzled, and the balance of power is uneven, what can you do? To find an issue, a way to breathe, I transferred to literature and art an ancient therapeutic method, trance, mobilizing the means at my disposition; screams and gestures a thousand times launched, repeated and recharged to escape immobilism, to recreate movement, to make breath emerge from the leaden shroud of oppression. That is what I call “furigraphie.”

CT: The short story ends with a reference to the red and black flag of socialist anarchism. What is your connection to this movement, and why?

H: Yes, it is used here to hijack the French colonial flag into a flag of the margins, by dyeing it in black and red—the colors of anarcho-communism. I indeed have a powerful bond with libertarian philosophy. First, because the kind of libertarian society which actually inspired a number of modern European anarchists (Rosa Luxemburg, for example) comes from us, the Imazighen (or Berbers). It is a method of management and social operation, without a pyramidal hierarchy of power, with which I am familiar and from which I come. Anarcho-communism is an extension of this logic, where man and his free will are placed at the heart of the system. Personally, I am interested in all the literature, and modern history, of the various strands of libertarian thinking.

CT: Some Tuaregs have recently, and for the first time in decades, recovered control of a part of their territory in southwestern Libya (a development that mirrors the remarks of a character, Ashamur, in your story). Do you think this can effect long-term change, and perhaps lead to a similar liberation over all the territory?

H: In all of their confiscated country, from Libya to Niger, Mali, Algeria and Burkina Faso, Tuaregs are resisting. They rebel from time to time and get crushed. They fall, rise, yell to find breath again and breathe in their desert, in central Sahara. For now, the situation is chaotic and forces are uneven, but the basic political conscience is clear, and the refusal of the crises and pogroms of failed and corrupted States is sung in poetry!

The real question is found on another level: international interests in this area—rich as it is with minerals and rare earths—are enormous, and the political competition between powers is played on the Tuaregs’ backs… Chaos is necessary for these powers to defend their own interests, under the fallacious pretext of controlling so-called ‘barbarians’ and other ‘savages’ menacing civilization… It is a script which repeats itself (it was largely used during colonization) with local actors who are perfectly manipulated. It works well and blinds Western public opinion to accept, without flinching, the installation of American and European military bases throughout the African northwest.

CT: What can you tell us about the current situation, and modern developments, of Tuareg literature?

H: Today, for Tuaregs, there is no longer any room or time for a literature that isn’t a literature of urgency. Our current literature is a work of resistance dominated by poetry and songs. Production in those domains is abundant and rich, and shows that there can be an ideal, another life, outside the disaster of States, of their agents and their powerful international allies, who today stamp on the Tuaregs, their country and their aspirations.