North Africa is traditionally said to be made up of eight countries: Egypt and Sudan, through Libya, Tunisia and Algeria to Morocco, Western Sahara and Mali in the west. Historically, it was made up of the areas of the Maghreb in the west and the Nile Valley, that have been ruled and fought over by Phoenicians, Egyptians, Romans, Islamic Caliphates, Ottoman Sultans, and French and Spanish colonists. We check out the 12 most incredible, fascinating historical destination in this unique corner of the world. 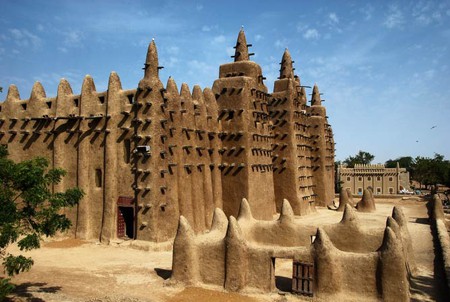 The Old Towns of Djenné | Mali

The Old Towns of Djenné | Mali

The Old Towns of Djenné in central Mali were once a key stop for the merchants taking slaves, salt and gold across the Sahara to the medinas of Morocco. The adobe buildings are made from mud bricks baked hard in the sun and structured around great log scaffolds and palm fronds that jut out from the walls. UNESCO describes the Old Towns as making up one of the most beautiful cities in Africa, with the Djenné-Djeno area dating back to around 200 BC. In the 15th and 16th centuries the area was famed for its madrassas and Islamic scholarship – the Great Mosque built in 1906 is the great centerpiece of the Towns.

Historical Landmark, Natural Feature
Facebook
Email
Twitter
Pinterest
Copy link
Share
Map View
Now abandoned, Ait Benhaddou was once a ksar, or magnificent fortified city in the foothills of the Atlas Mountains in Morocco on the old caravan route from Sudan to Marrakech. Built from baked earth, its high defensive walls, watch towers and clusters of castellated houses were built from the 17th century onwards. Mosques, religious sanctuaries, marketplaces and Jewish and Islamic cemeteries now stand disused in the city that rises above the surrounding landscape. If the picture looks familiar, it’s because Ait Benhaddou has often been used as a filming location in Game of Thrones, Gladiator, and The Living Daylights.
Open In Google Maps
Aït Benhaddou, Drâa-Tafilalet, Morocco
Give us feedback
Book Now

Leptis Magna to the east of Tripoli on the Mediterranean coast is one of the best preserved of all Roman cities. Originally, it was a Berber settlement, then held by the Carthaginians before falling to Rome following the Punic Wars. At the end of the 2nd century AD its wealth grew when the native Septimus Severus became emperor. He lavished wealth and buildings on Leptis Magna, including the forum, basilica, theatre and amphitheatre that stand today and the arch of Septimus Severus. From there, lions were sent to perform in the Colosseum in Rome.

Deep in the Egyptian desert lies the oasis of Siwa, a place of date palms and olive groves. So isolated is Siwa that over millennia it developed its own culture that included a language derived from Berber and the widespread practice of same-sex marriage, whilst Islam was rejected for many centuries. The history of Siwa begins in the 10th millennium BC before it was settled by Egyptians and a temple for the oracle of Amun was established, the latter visited by Alexander the Great. Its ruins still stand along with those of the ancient fortress of Siwa, the Shalil. In the Second World War, it was used as a base for British Special Forces.

Natural Feature, Historical Landmark
Facebook
Email
Twitter
Pinterest
Copy link
Share
Map View
Essaouira, on the Atlantic coast of Morocco, has been a vital trading post since the Carthaginian era, fought over and defended by French, Portuguese and Moroccan forces. In the 16th century the Portuguese established the short-lived fortress of Castelo Real de Mogador at Essaouira, only to be forced away by the Moroccans. The modern walled city was built in the 1760s by Sultan Mohammed III of Morocco using European engineers including a mysterious Englishman named Ahmed el Inglezi. Citadels and ramparts soar above souks and ornate buildings used in the 19th century by British, Dutch, and Spanish diplomats who came to negotiate trading concessions.
Open In Google Maps
Essaouira, Marrakesh-Safi, Morocco
Give us feedback
Book Now

Despite the Pyramids being the iconic image, the Karnak temple complex at Luxor is probably the most spectacular site of ancient Egypt. Karnak was added to by over 30 Pharaohs from 18 dynasties across a period spanning from the beginning of the Middle Kingdom up until the Ptolemaic era and the Roman conquest of Egypt, a timespan of well over 1000 years. The remains of temples and pylons, huge columns and frescoes inscribed with hieroglyphs, and obelisks and statues of gods and Pharaohs still remain, including the famous precinct dedicated to Amun-Re. 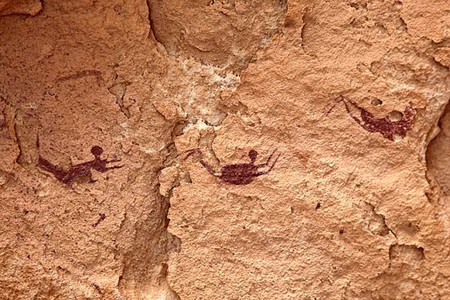 The Cave of Swimmers | © Roland Unger/WikiCommons

The Cave of the Swimmers | Libya

The Cave of the Swimmers stands in the Gilf Kebir plateau hundreds of miles into the Libyan Desert, an area not discovered by cartographers until 1926. You might have heard of it through The English Patient. In 1933, a set of petroglyphs, or cave paintings, dating to the Neolithic era were discovered, depicting men and animals swimming. Today, there have been countless other petroglyphs discovered in the Sahara, but the Cave of the Swimmers are perhaps the most extraordinary. They suggest the deeply inhospitable desert was once temperate and watered, a place where animals could be kept and plants cultivated. 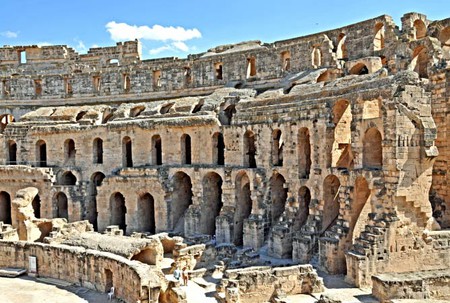 The small town of El Djem in Tunisia was once the Roman city of Thysdrus, most of which now lies buried by the desert sands. What still stands is the great amphitheatre, once the site of gladiatorial contests and chariot races. It was the largest of its type in the Roman Empire, smaller only than the amphitheatre at Capua and the Colosseum at Rome. Historians believe that around 35,000 spectators could be seated inside. Today the arena, the passages in which were kept the wild beasts and the fighting men, and the three levels of the Corinthian façade remain intact.

The Mosques of Cairo | Egypt

The Mosques of Cairo | Egypt

Most visitors head to Cairo for the museums dedicated to the era of the Pharaohs and miss out on the superb Islamic architecture surrounding them. Cairo is sometimes known as the ‘City of a Thousand Minarets’, so packed is it with mosques, kasbahs, and madrassas. Two sites in particular are worth checking out. The Mosque of Ibn Tulun is the oldest and largest in the city, built by the Governor of Egypt, Ibn Tulun in the 870s. The minaret has an extraordinary outer staircase modelled on that of the Great Mosque of Samarra in Iraq. The other site, the Al-Azhar Mosque, was founded in 970 and has functioned as a seat of learning ever since, with the great library of Cairo within.

The Mosques of Cairo, Egypt

On the Mediterranean coast of Algeria, Oran has been a place fought over by French, Spanish, Moors and Turks for hundreds of years. Founded by the Moors of Andalusia in the 10th century, the port passed back and forth between Spanish and Ottoman hands before it was taken by the French in the invasion of Algeria in 1831. More recently, in the Algerian War or Independence of the 1950s it was the site of massacres of French settlers. The legacy of the various invaders and colonists is a townscape where bombastic French baroque buildings of the Second Empire stand side-by-side with the old medina quarter, whilst the Spanish port of Santa Cruz overlooks the whole city from the slopes above.

The Nubian Monuments of Abu Simbel and Philae | Egypt

The Nubian Monuments in southern Egypt, as UNESCO calls them, stretch over an area of over 200 kilometres from Aswan in the north to the Sudanese border in the south. Formed of a mass of monuments and temples from the Pharaonic period, the monuments include the temples of Amada, Derr, Talmis, the huge granite quarry used by the Pharaohs at Aswan and the sanctuary of Isis at Philae. Most impressive is the rock temple at Abu Simbel, with its colossal statues hewn from the living rock to commemorate Ramses II and his victory over the Hittites at Kadesh.

The Medina of Marrakech | Morocco

The Medina of Marrakech | Morocco

There are medinas and souks across North Africa and in Morocco especially, at Fes and Tangiers and many other towns. But the medina at Marrakech is one of the finest examples of a medieval Islamic fortified site still standing in something close to its original form. A UNESCO World Heritage Site, the medina of made up of a maze of alleys, souks, mosques, palaces and gardens. It was largely built by the Almoravid dynasty between 1070 and 1072, rulers of much of the Maghreb and Andalusia, and served as the capital of the Almohad Caliphate. Its highlights include the ramparts and huge gates, the great market square and the Koutoubia Mosque.