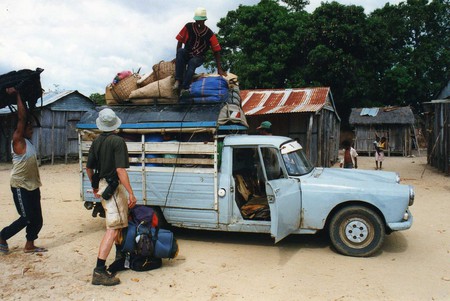 A hapless tourist attempts to get to one of Mayotte’s natural wonders in this short story by Bruno de Villeneuve, included in the Mayotte section of our Global Anthology.

On a beautiful morning in March, Arnaud decides to go for a walk to visit one of the island’s most remarkable natural sites: the Soulou waterfall.

This site is unique in the world. A beautiful fresh water waterfall cascades directly into the sea, on a beach of fine sand. So one can bathe in and rinse oneself with fresh water after going for a swim. Since it’s marked in all the guide books and brochures of Mayotte, he leaves without much knowing where he is going.

What he does know is that this will be an ideal opportunity for photography, so he takes his camera. This however does complicate the situation, the walk having turned into an expedition by the necessity of bringing a swimsuit, mask and snorkel for the swim, and a camera to keep a memory of the site.

And the forced coalition of a camera and water never made for good housekeeping. He nonetheless manages with a few plastic bags.

One should not forget proper protection, either, in case of rain. That is to say that with sunscreen, mosquito repellent, and a little drinking water, Arnaud fast finds himself with too much weight on his back. As even the most minor walk goes through very steep climbs, one is quickly fatigued by the weight.

But the sun has been out all morning in Mamoudzou, a poncho is unnecessary. False! Because despite its weight, one is always better off taking it, especially during the rainy season.

As for the bottle of water, he quite simply forgot it. Still a beginner and new to the island, just come from a fresh-weathered mainland, his notion of thirst isn’t particularly well formed.

With the bag on his back, he leaves his lodgings to take a taxi. He still doesn’t have a car, and a taxi represents the only means of locomotion possible and practical.

He leaves with great apprehension, since while leaving Mamoudzou to visit a village poses no problem, the same cannot be said of returning. One needs a little more luck to find a taxi fast, passing in front of you at just the right time.

Moreover, taking into account the duration of the drive, the distance of the walk, and the time to sunset, he hesitated before leaving. It is already 2:30pm. He wants to avoid the hottest hours, between 11:00am and 3:00pm.

To find the site, one must travel southwest across the island, by Tsingoni. To take a taxi from the capital, it is necessary to know these particular locations in relation to one’s desired destinations.

For example, you have to go past the grand bazaar to find the taxis going north. But for those visiting the southern villages, Tsingoni in particular, taxis can be found on the roundabout of the barge. But Arnaud is unaware of this.

So instead he went to the northern taxi site thinking he could find a cab or at least information liable to suit his interest. But a driver tells him that he must go to the southern site. Arnaud then walks on the paved road, muttering to himself that he walked a good quarter of an hour in the heat for nothing, and then returns to the northern site to question another driver.

“Ah! No, it’s not here. Ask one of those guys sitting under those the trees. They’ll take you to Tsingoni.”

Arnaud is lucky, because this driver speaks French well. That is not always the case.

“Thank you, I’ll go check.” He does not yet know Mahorais. He’ll have to learn it.

Arnaud thus goes behind the roundabout. The scene is one familiar to arrivals from Petite Terre: on the right are drivers waiting around, sitting on a small wall under bamboo trees; on the left are bwéni women who sell samosas made with peanuts and eggs. A driver looks at him, probing for passenger. He tells him “Tsingoni,” and the other responds with a sign of the head that he happens to be going there. He gets in the car with a backpack on his knees.

Even though the journey is long, he prefers to keep his bag with him, even if it makes him sick. He put his stuff in the trunk once before. Climbs in Mayotte can be impressive and steep. Some cars are in such a dismal state their trunks cannot be depended upon to stay shut. What he feared naturally happened—that is, during a particularly steep climb, the trunk opened up and spilled his belongings out onto the road. Several things broke. The sorry driver apologized with a mere “Ah! I was not aware that you were stowing things that could break. When you have fragile things, it is better to keep them with you!” Reassuring, don’t you think? Since that day, he’s been careful.

That was how things used to be, at least. Now new cars are replacing the old taxis, and one can often see these modern autos zipping around the island (one wonders how their drivers manage to afford them). These kinds of problems are eliminated as fast as the new cars are selling.

Beside him an imposing bwéni places her breadfruits at her feet. Wrapped in bright orange and yellow salouva dress, she fixes with a precise gesture the veil on her head. In contrast to the European ideal of slenderness, the “wire” trend, which has become dangerous for certain young women, the opposite is assured here with an ideal based around generous curves. It is probable the younger generation may feel differently, given the massive arrival of Western trends. Windows open wide, the taxi departs.

There is still officially space available at the back. The driver shouts “Tsingoni!” from time to time through his window to people who seem to be waiting for a taxi on the road. But no one gets in.

They had to wait until the village of Combani, having driven through a sinuous road surrounded by lush greenery, for another passenger to get in. With three at the back we’re a little tight, thought Arnaud, but one has to get used to it. Thankfully, a little further, at Tsingoni, the mama gets off. With that, everyone else breathes a little easier. The driver then asks Arnaud where he is going. In truth, he’s not quite sure. He had just looked at the map before leaving to find the way to the waterfall. Once he’s out of the car and has paid the driver, he finds himself in front of a small path which he estimates to be the one he’s looking for.

This is a translation of a short story originally published in Tribulations de Wazungu à Mayotte, a collection by Bruno De Villeneuve | © Editions l’Harmattan, 2004