Made in Africa: How Diaspora Fashion Is Being Reimagined 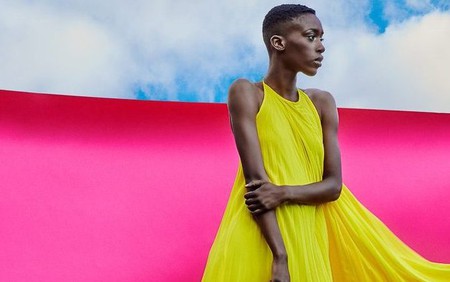 More and more African diaspora designers are travelling to the continent to produce their fashion collections and accessories than ever before. Here is all you need to know about this growing trend and some of the names behind it. 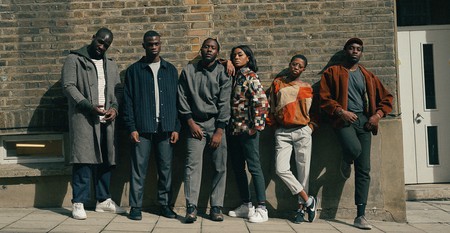 Since its industrial reform started in 1978, China has secured itself as the largest textile manufacturing industry in the world for both production and exports. Global fashion houses including Prada, Armani, and Dolce & Gabbana, as well as other small-to-medium enterprises (SMEs) are known to produce their garments in China in an effort to turn a profit.

Due to the fast turn-around and cheap labour offered by these manufacturers, the fashion industry more often than not has tended to rely heavily on China’s as well as India and Bangladesh’s industries for its production. Recently however, there has been an influx of designers with links to Africa who are returning to the continent and collaborating with local tailors, artisans and creatives whose techniques and cultural know-how positions them as better partners in the fashion-making process.

The South China Morning Post reported that China’s market value in the global textile and clothing industry is falling, with a downward trend in major apparel importing regions such as the US, European Union and Japan.

MIA London is a tech and fashion formal wear and tailored streetwear brand based in London. However, their garments are handmade by expert tailors in South Africa and Zambia, with a long term goal of producing collections with local tailors in all 54 countries in Africa. Hence the acronym MIA (Made In Africa) and a unique selling point (USP) as having the ability to offer fast fashion and bespoke clothes from Africa with a quick turnaround.

MIA London sources tailors via recommendations from experts in the fashion industry in both South Africa and Zambia. Their next collaboration is set to happen in founder Aji Ayorinde’s home country of Nigeria.

Launched in 2016, the inspiration for MIA London was birthed when Ayorinde was in South Africa some years ago and in the process of getting a custom-designed suit for himself. Ayorinde now sees the brand as a means to showcase the expert tailors in Africa who are able to compete with the best, thus changing the narrative on African fashion.

In an interview with, Ayorinde discussed his process and the inspiration he found working with local tailors instead of with factories in China. The designer said that because of the handmade element of his brand, it was “important to demonstrate that it’s possible to get highly skilled tailoring made in Africa, commonly thought to be inaccessible. In addition to there being a developed textile industry in South Africa and a close-knit, forward-thinking creative community in Zambia.”

Ayorinde added that the trend of African diasporans heading back to the continent is positive because it shines a spotlight on Africa which is important for its growth. He also sees MIA London’s approach in working with these tailors as a way to empower the tailors and other local creatives, models, and stylists that work within the communities, which in turn helps them serve their own communities thereby bringing further business. 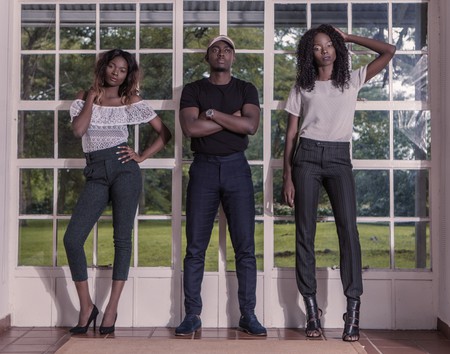 In the second phase of MIA London’s launch which is the tech branch, Ayorinde hopes to publish an app which will hold a database of creatives in African countries.The app will facilitate contracts and negotiations between creatives and other businesses looking to collaborate which will help alleviate any disparities of bargaining power between the creatives and the brands.

Ayorinde shares that the entrepreneurial spirit of the local tailors has been a positive in the collaboration process. By maintaining their own agency, he’s able to work with them as partners rather than dictating their autonomy which is better for business. However, on the other hand, Ayorinde finds that this positive aspect can also be a challenge because the business culture is different to what he’s used to in the West. Brands wanting to work with these local tailors have to understand their market is different and as such learn how their processes work.

Overall, Ayorinde believes collaborative initiative like these with local talent are more meaningful to these communities, not only as an added source of clientele, but also as a means of building meaningful relationships bringing African culture and craftsmanship to the forefront as a significant innovator.

AAKS is a luxury handbag brand founded by Akosua Afriyie-Kumi in 2014. The brand is known for its vibrant handwoven raffia bags that celebrate the weaving techniques practised by women artisans in northern Ghana.

Akosua is a Ghanaian native who lived and studied in London, graduating from Kingston University London with a BA (Hons) Fashion degree, before going on to gain extensive experience in the fashion industry and co-owning a fashion brand before the inception of AAKS.

Years later in Ghana, Akosua was inspired to start her ethical brand after visiting a village in northern Ghana. Now based in Ghana, Akosua travels around Africa and Europe, working with local artisans, experiencing new cultures and picking up new inspirations for her traditionally made, yet modern luxury handbags for the fashionable woman.

Every AAKS bag starts its journey from ecologically-harvested raffia from family farms, before being dyed in a process formulated in-house in order to create exclusive seasonal colours. The bags are then woven using raffia and leather, using a traditional technique unique to the local women handed down through generations. Finally, a signature tag is added to prove its authenticity. Each bag takes approximately one week to complete, attesting to the quality and craftsmanship for which the brand is known. 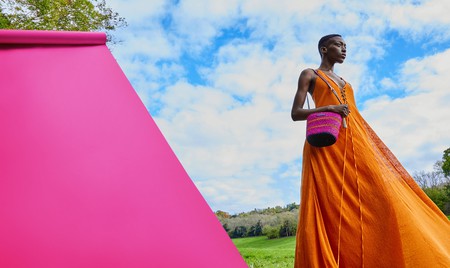 Since its launch, AAKS has been featured by Elle Decoration, Vogue, CNN, Forbes Woman Africa, Guardian UK and shortlisted as an emerging designer from Africa by Vogue Italia. The Ghanaian-made bags are now stocked in 60 stores worldwide, including Anthropologie and Urban Outfitters.

In an interview, Akosua said that her African heritage plays a significant role in her work, and that while Africa has been overlooked for its beauty, she believes the time is now for African fashion to shine and spotlight its culture. The inspirations for her colourful bags are also drawn from nature and African fine artists such as Yinka Shonibare.

AAKS as a brand not only creates sustainable jobs within the small community of women, but by doing so also ensures that the ancestral tradition of hand weaving isn’t lost to future generations. 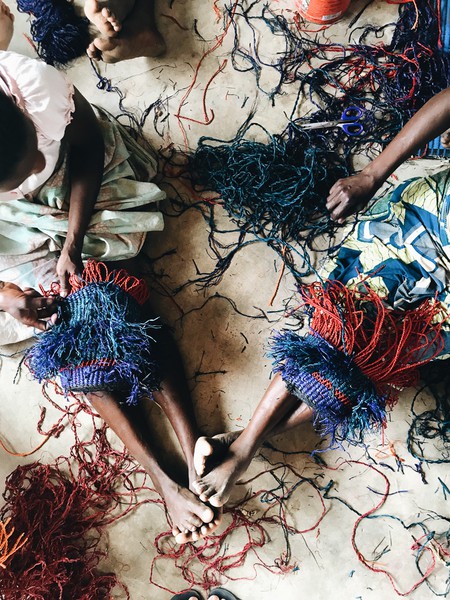 Behind the scenes of local artisans creating the AAKS bags | © AAKS

Okun is a luxury men’s swimwear brand launched in 2013 by Bola Marquis. The name Okun comes from the Yoruba language of Nigeria and means ‘the ocean’. Before its inception, Marquis wanted to create a menswear brand and after a trip to Lagos, Nigeira, he was suddenly inspired to focus on African inspired swimwear.

In an interview he said he saw a gap in the market as there was nothing like it catered to men, although there were lots of other designers using the popular West African ankara print and batiks to make fashion collections.

The prints for the swimwear are made in-house and inspired by different signs and motifs from cultures around Africa. In previous collections, inspiration has come from traditional woven patterns from Ethiopia and Congolese kuba cloth, as well as South African shweshwe print. Also, each season, a Ghanaian Adinkra symbol is used to headline the brand’s mood.

Before Okun, Marquis was a Global IT Programme Manager for multinational companies. About 15 years later, his desire to do something more creatively driven and inspired by his motherland and travels, Okun was born.

Most of their products are made in Africa by local artisans and some through an ethical partnership with Ethical Fashion Initiative who connect artisans in West and East Africa to international fashion houses for mutual benefit. The initiative ensures that these marginalised artisans who are mostly women, are able to earn a living wage and are able to take control of their lives. A percentage of the brand’s profits go to foundations on the continent that improve the livelihoods of young Africans.

Okun is now stocked in 30 premium stockists internationally across 20 countries including Mr Porter, Browns and Fortnum & Mason’s in London and Alara Lagos as well as luxury hotel chains such as the Constance Group in the Indian Ocean.

In more recent times, the western media and its consumers have began to take an interest in the quality of working standards for the staff producing their favourite high street or luxury branded products due to more awareness and the call to action on workers safety in factories in China and South Asia. Perhaps this renewed interest in sustainability, conducive working environment and fairer wages has contributed to more designers looking elsewhere to produce their products.