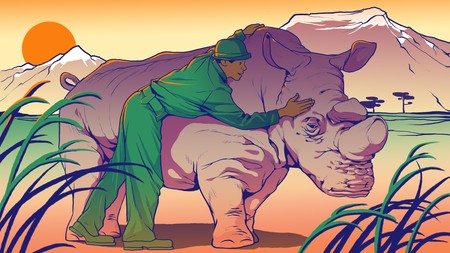 Sudan, the world’s last male northern white rhino, recently passed away at age 45 in the Ol Pejeta Conservancy in Kenya on March 19, 2018. His death was met with great international outcry, as only two other northern white rhinos—both female—are still alive today. Though Sudan may be gone, his legacy and contribution to rhino conservation around the world remain.

Few animal lovers will forget the iconic image of Sudan grazing in the Ol Pejeta Conservancy in Kenya, surrounded by four armed guards prepared to defend him from poachers. As the world’s rhinoceros population has been rapidly decimated by environmental changes, war, and poachers intent on stealing rhinoceros horns—with thousands of rhinos slaughtered in the last decade—Sudan’s mere existence continued to raise awareness for the plight of the rhinoceros and other endangered species.

Sudan was first brought to Kenya from a zoo in the Czech Republic in 2009, where he had been living since being captured in South Sudan in 1975. By 2009, he was one of the world’s eight remaining northern white rhinos, and his relocation was undertaken in the hopes of saving the species. While at the conservancy, he served as an inspirational figure to many animal conservationists around the world and had thousands of international and local visitors. Though undoubtedly difficult, his unique situation was used as a rallying call for conservation efforts globally, and due to Sudan’s influence and existence, millions of dollars have been raised for rhinoceros conservation since his passing. 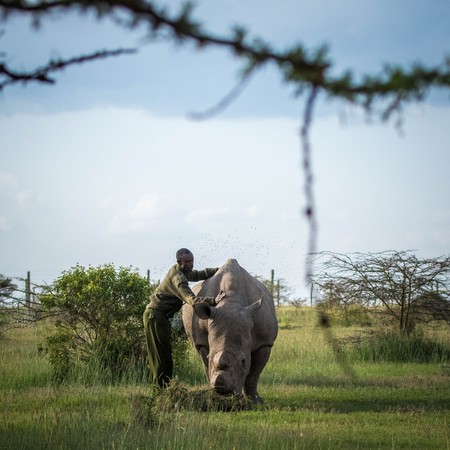 Serving as a reminder of the fragility of animal populations around the world, Sudan, unfortunately, succumbed this past week to age-related complications and infections. The rhino might yet live on post-mortem, however, as new reproductive technologies and IVF advancements are being studied right now as a possible solution to keeping the northern white rhino species alive. Though many scientists are championing this approach as a way to revitalize the northern white rhino, many conservationists are concerned that it’s just too little and too late.

Ami Vitale, a photographer for National Geographic who documented rhino conservation around the world and Sudan specifically, commented in an Instagram post, “Today, we are witnessing the extinction of a species that had survived for millions of years but could not survive mankind.”