How Africa Is Affected by Coronavirus 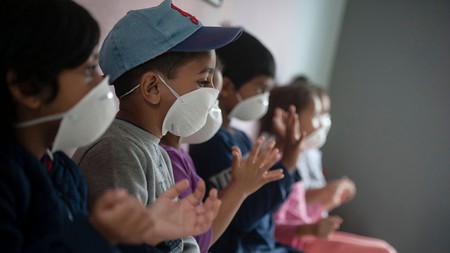 Children wear masks as they sanitise their hands at a preschool in Lenasia, Johannesburg | © Siraaz Mohamed/AP/Shutterstock

COVID-19 could be a “ticking time bomb” for Africa as the threat to the continent becomes a reality.

Numbers had suggested the African continent – and sub-Saharan Africa, in particular – may have managed to escape the disease. But on Sunday night in a televised address to his nation, South Africa’s President Cyril Ramaphosa declared a national state of disaster after a sharp increase in the number of people affected.

He announced Africa’s most drastic measures to date, and as a result stocks slumped to a six-year low, bonds fell and the rand weakened.

Ramaphosa also confirmed the virus is now transmitting person to person within South Africa itself. In a bid to tackle the crisis, he announced that his government had finalised a package of measures to try to minimise the effect of the global pandemic on the country’s already struggling economy.

It will allow authorities to access special funding and impose harsh regulations in a bid to try to control the virus. Travel bans are in place, schools shut and public gatherings of more than 100 people have been banned. “We have decided to take urgent and drastic measures to manage the disease, protect the people of our country and to reduce the impact of the virus on our society and on our economy,” President Ramaphosa said. “There can be no half measures.”

Numbers across the continent are rising quickly. South Africa had its first case confirmed on 5 March; 12 days later that number had risen to 62.

Rwanda, Equatorial Guinea, Namibia, Somalia, Tanzania, Liberia and Benin have all now reported their first cases of the COVID-19 virus. The number of African states now affected has reached 30.

Professor Bruce Bassett, a data scientist at the University of Cape Town, has been tracking the numbers since January, and believes the virus could be spreading undetected. “My concern is that we have this ticking time bomb,” he said.

Professor Francine Ntoumi, the executive director of the Congolese Foundation for Medical Research, said she feared numbers could be much higher, adding that, “we need to investigate why large parts of Africa are asymptomatic. It’s quite surprising to see that Africa has so few cases compared to other continents.”

Professor Ntoumi and other experts are concerned that the healthcare systems in many African countries are too weak to cope; she says they fear those affected by HIV, tuberculosis and other infectious diseases will be at greater risk. “If we reach the same point as Germany or France, we will not be able to manage,” she said. “Here in the Republic of Congo, we don’t have hospitals or systems in place to deal with it.”

She added that advice issued by the World Health Organization (WHO) had not taken into consideration the difficulties that Africans face, such as washing hands regularly. Such advice may be logical for people in the West, but not for millions of Africans who don’t have access to running water.

“What happens when you don’t have water at home? How can you say to children, to family members to wash their hands? It’s not realistic,” she said. “When you don’t have enough money to buy food, do you think it’s possible to buy [antibacterial] gel for the whole family? It’s not the reality. I hope we don’t reach an epidemic on our continent. It will be difficult to manage.”

Professor Ntoumi is also concerned that the implications of social distancing have not been thought through enough. “Homes in Africa are small,” she said, “with lots of people, young and old, living together. How do you quarantine the elderly when they have nowhere to go? No one is addressing these issues. No one.”

She is urging African governments to act fast and address the pandemic before it escalates. “We need to prepare now, not when we’re confronted with cases. We should not wait for the WHO or for Europe. We need to find a local solution with local governments. For me that is a major issue.

“I believe medical research is key,” she added.