Africa's 10 Best Exhibitions You Should See This Summer

The contemporary art scene in Africa is thriving – new galleries that have popped up over the last decade are supporting local artists and often playing host to leading contemporary figures from abroad. This summer there are exhibitions exploring everything from modern African identity and politics to nature and contemporary approaches to landscape painting. Here are then of the most exciting exhibitions coming up this summer across Africa. 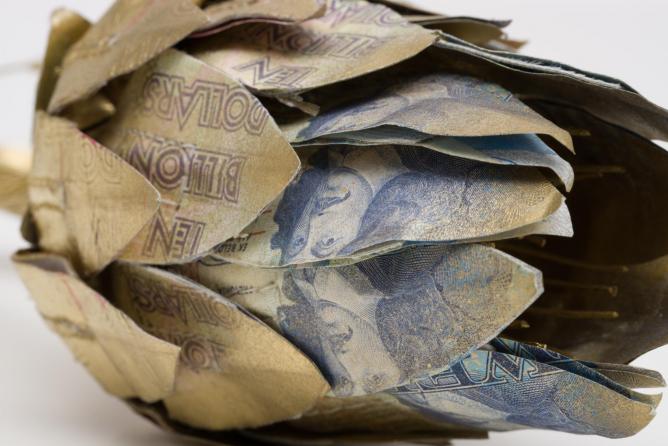 29 May – 12 July After previously exhibiting in partnership with other artists in Cape Town and abroad, this will be the very first solo show at the Stevenson Gallery for Mawande Ka Zenzile. His exhibition, titled Experimentation: All Hell Break Loose, explores themes including politics, colonialism, commerce, power and ideology in the modern world. Ka Zenzile works in paint and sculpture, building his works from found objects and seemingly unconnected cultural images – you will find Mowgli from The Jungle Book alongside images of Osama Bin Laden and Saint Sebastien in the exhibition. High culture and low culture are combined and brought together in free association to build a complex web of images that make up the chaotic nature of modern existence. All the while, Ka Zenzile uses the scarecrow and the boat as repeating symbols – the one a memento mori, the other an image of the individual confronting the disparate nature of modern life.

Vabvakure by Gerald Machona at the Goodman Gallery in Johannesburg, South Africa

Gerald Machona’s exhibition at the Goodman Gallery focuses on themes of xenophobia, identity, estrangement and the experience of being a Zimbabwean artist working in an increasingly intolerant South Africa. The exhibition is entitled Vabvakure, meaning in the Shona language ‘people from far away’, and was, in part, inspired by the riots of 2008 in South Africa against other African migrants who had come to South Africa to live and work. The works on show include photographs, sculpture, and films and explore the harsh realities of being a foreigner in modern South Africa. There are elements of magic realism and you might see echoes of the heads without faces of the surrealist René Magritte in Machona’s style. Each face in Machona’s work is obscured by masks and objects created from decommissioned Zimbabwean banknotes. 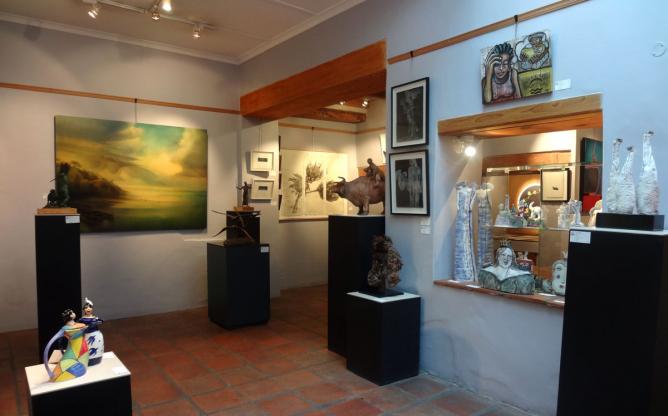 5 – 20 June Ragheb Ayad died in 1982 and is regarded as one of the finest modern painters ever to emerge from Egypt. Working in the first half of the 20th century during the years of British occupation, Ayad was the first artist who sought a uniquely Egyptian identity in his works, which featured images of daily life, folklore, and popular culture and were influenced by the art of the Pharaonic age. From 1924 he was behind the Cairo Salon exhibitions promoting native Egyptian painters, and later Ayad served as Professor at the Faculty of Fine Arts in Cairo. The works on show at the Safar Khan Gallery have rarely been seen in public and come from the collection of Sherwet Shafai, who was a close friend to Ayad.

5 – 28 June Located in the Old Town in Cape Town and surrounded by 18th and 19th century auction houses, antique shops and galleries, the Cape Gallery possesses one of the most refined and elegant settings of any gallery in Africa. Its natural emphasis is on exhibiting works by Cape artists interested in traditional subjects such as wildlife, landscape, and flora. For the annual winter solstice exhibition, the gallery has taken as its theme ‘Threshold’ and will feature works from leading South African painters and sculptors. Amongst the artists and works featured will be the charcoal drawings of Jen Lewis, the bronze sculptures and plein air landscape works of Niel Jonker, and the dreamy and brightly coloured montages of Leon de Bliquy. Also watch out for the witty skyscapes of Peter van Straten. 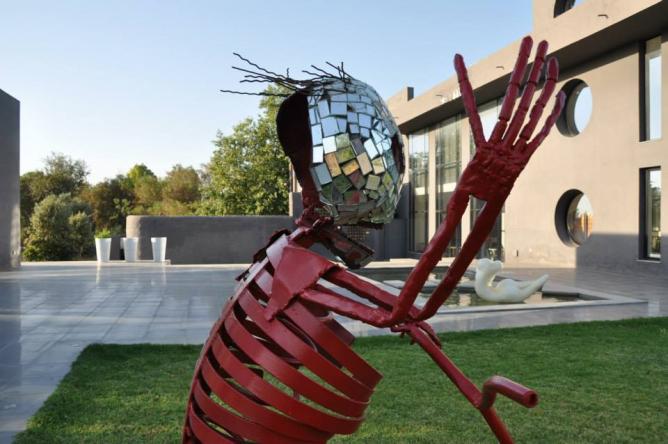 6 June – 29 July The B’Chira Art Center is one of the leading galleries displaying contemporary work by Tunisian artists, and has been open since November 2011 in a wonderful setting close to the Ennahli Park. The ACT 03 exhibition is an opportunity for leading contemporary artists in Tunisia to show off their work – there will be a mixture of paintings, video art, and installations from 25 Tunisian artists following the exhibition opening and book signing by the author Khaled Abida, whose new work is focused on the allegorical works of Paul Klee. Among the artists featured is the highly regarded Mohamed Ben Soltane, the present curator of the B’Chira Art Center, whose work includes sharp social criticism and focuses on the state of Tunisia following the revolution of 2011. 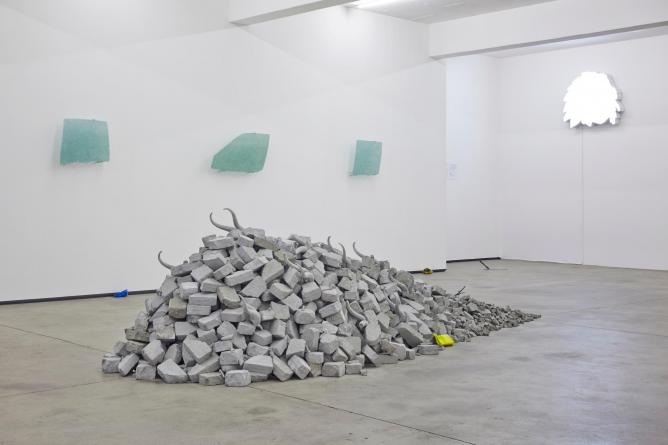 7 June – 8 July The whitewashed town of Sidi Bou Said has long attracted artists including Paul Klee, Michael Foucault and Henri Matisse. Le Violon Bleu exhibits works by Tunisian and international artists and this summer will be presenting ceramic works by artists from across the world. The Autour de la Terre exhibition features the works of five ceramicists in total: Ymen Chetouan, Marie José Armando, Malek Gnaoui, Khaled Sen Slimane, and Valeria Nascimento. Tunisian Gnaoui has recently exhibited in London at the Arab British Centre, while Nascimento, now based in London, is originally from Brazil and uses the natural imagery picked up in her childhood spent on a cattle ranch in her large-scale ceramic installations. Khaled Ben Slimane’s work is more traditional, incorporating traditional Berber symbols and verses from the Quran – you can find his work in the British Museum.

No Everything by Rowan Smith at Whatiftheworld Gallery in Cape Town, South Africa
Synagogue

7 June – 19 July Whatiftheworld Gallery opened in 2008 in Cape Town in what was formerly a synagogue and now provides a showcase venue for leading young South African artists. Rowan Smith is one of the finest talents on the contemporary art scene in South Africa and has already exhibited in galleries in New York, Paris, Los Angeles, and Istanbul. No Everything will mark his third exhibition at the Whatiftheworld Gallery and provides an ironic and ingenious exploration of South African history in the post-Apartheid era. Smith works with found objects such as crisp packets, restaurant signs, bones, springbok horns and images of Cecil Rhodes, exploring their modern meanings in an era where mass consumption is the only real unifying force in South Africa.

The Matisse Gallery in Marrakech has been promoting established and young Moroccan artists for over 12 years now. Abderrahim Iqbi falls into the former category and has been exhibiting in Morocco since the early 1990s. He will be his presenting work at the Matisse for just under a month this summer after last year’s exhibition in Rabat. His works are influenced by Francis Bacon, Hieronymus Bosch, and the philosophy of the French intellectual Gilles Deleuze – they concentrate on tough, uncomfortable questions on existence and the challenge of deriving purpose and meaning in a world of chaos and disaster. Iqbi’s figures are distorted, surreal, perhaps even grotesque, and they hint at tragedy, distempered minds and violent events. Perhaps the most unique painter working in Morocco today, Iqbi offers a stimulating and challenging selection of works this summer.

Roger Ballen at the Circa Gallery in Johannesburg, South Africa

The Circa Gallery in Johannesburg is supported by Deutsche Bank and supports and exhibits the best in contemporary art from across Africa and internationally. This summer sees one of the finest photographic artists in the world, Roger Ballen, exhibit works entitled Asylum of the Birds, which is a retrospective of his 40 years living and working in South Africa. Ballen works in black and white in a hybrid aesthetic often featuring photographs as props within an image formed with sculpture and collage techniques. His subject matter has varied from hauntingly empty small-town South Africa, to interior images with people missing and only birds appearing, juxtaposed with strange dummy and doll figures – altogether, his work is unique and unforgettable.

The Windhoek Triennial, a Namibia-based exhibition, is arranged by the National Gallery of Namibia and Bank Windhoek to promote artists working in various media. Artists were invited in the summer of 2013 to start preparing entries to the Triennial, out of which the finest works will be selected and exhibited at the National Gallery in Windhoek in September with prizes awarded to the selected artists. You can expect to find works in four different categories – two-dimensional artworks including drawing, painting, and prints; new media such as photography, video installation, conceptual and performance art; three-dimensional work like sculpture and ceramics; and craft and design, which includes pottery, weaving, jewellery and textile works. The Triennial is a huge showcase and draws the finest talent in Namibian art into one event.