A figurative vehicle spreading world music through a series of inconceivable African-Western collaborations, Africa Express is an ambitious musical experiment, officially founded in 2006 by Blur and Gorillaz frontman Damon Albarn together with a small group of producers and other likeminded individuals. The amazing project continues to thrive and inspire an amazing interplay between musicians and composers from diverse backgrounds and cultures. 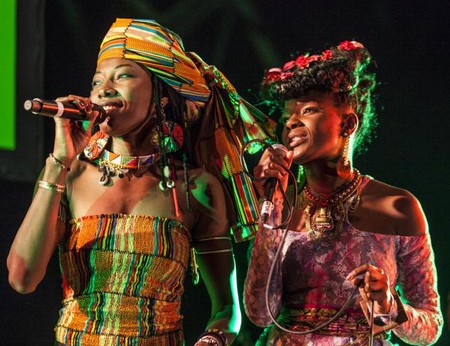 Tired of the West’s patronising attitude towards African artists and view of Africa as a continent plagued by war and disease, Damon Albarn envisions Africa Express as giving Africa a positive image and creating an equal musical playing field between African and Western artists. With the overall aim to enlighten and inspire Western artists on the incredible depth of African music, both contemporary and traditional, Africa Express facilitates a cultural interplay between musicians from different cultures, genres and generations, breaking conventional boundaries and providing a new perspective on African music from a Western point of view.

It all started with a trip to Mali in 2006, when Damon Albarn, together with a group of artists and producers including Fatboy Slim, Martha Wainwright and Jamie T, went straight to the heart of Malian music, and organised jam sessions with Salif Keita – the ‘Golden Voice of Africa’, kora master Toumani Diabate, and other Malian music legends. This was followed by a number of unforgettable events such as performances at Glastonbury in 2007, a gig at the BBC Electric Proms and a massive five-hour show in Paris featuring 100 artists and over 15,000 spectators, coupled with adventurous musical stop-offs in various African countries, including Nigeria, the Congo and Ethiopia. 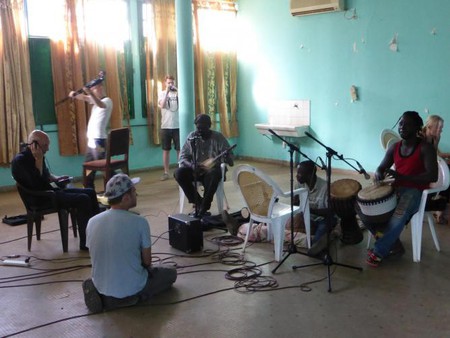 Many Western musicians and producers involved with Africa Express, who had never been to Africa before, all of a sudden left their comfort zones, completely immersing themselves in the culture of their African counterparts and working side by side with artists they never would have dreamed of creating music with. More than just about music sharing, Africa Express brings people of different backgrounds together and introduces them to a whole new spectrum of musical culture, from using new instruments to learning about different forms of musical expression and appreciation.

The musicians work together through on-the-spot collaborations revolving around a boundless central rhythm, open to all forms of improvisation and moving away from the individual approach to making music. Whether it’s Baaba Maal performing along Franz Ferdinand or Rokia Traoré singing with Damon Albarn, each musical creation is unique and collaborative, remarkably bringing out the best of each artist. 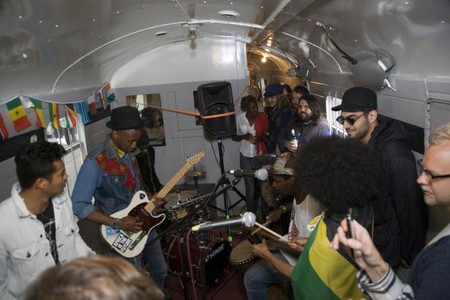 Members of The Temper Trap, The Very Best, The Bots, and Romeo Stodart, Remi Kabaka and Pauli ‘The PSM’ on drums | © Simon Phipps

In August 2009, an eclectic album called Africa Express Presents… was released, featuring 17 exclusive songs by African stars such as Amadou and Mariam, Tinariwen, Femi Kuti, and Rachid Taha. The tracks were selected by the likes of Damon Albarn, Bjork, Massive Attack and Elvis Costello, amongst others, reflecting their wide interest in and admiration of African music. A 25-minute documentary, The Story So Far, directed by Jamie Clark shortly followed the release of the album, presenting unseen footage of Africa Express’ trips to Bamako, Kinshasa and Lagos along with live performances and interviews with musicians and collaborators.

Watch below a short video by Africa Express:

The next major phase in this extraordinary venture came in the form of a real Africa Express train in September 2012. Africa Express organised an unprecedented train tour around the UK with about 80 African and Western emerging and renowned artists, as well as DJs and producers. The train was transformed into a chaotic musical village independent of origin, where carriages became impromptu music studios delivering a vibrant fusion of music across the UK. A spirit of spontaneity guided the tour, with pop-up performances in unexpectedvenues from schools and railway stations to factories, shopping centres and local clubs, bringing Africa Express’ music craze to the unlikeliest of audiences.

Africa Express’ most recent project was the production of a new compilation album entitled Maison des Jeunes, translated as ‘Youth Hostel’, digitally released in December 2013. A few months before, Africa Express musicians and producers had worked painstakingly alongside a new wave of contemporary Malian musicians in a temporary studio set up in a youth hostel near the banks of the River Niger in Bamako. The timing had been quite significant given the country’s political turmoil, and the Sharia ban on music in northern Mali. After seven days full of music exploration and collaborative production, the resulting 11-track album was completed, portraying an intimate glimpse of Mali’s new generation of musicians and the endurance of these musicians in light of the country’s difficulties. 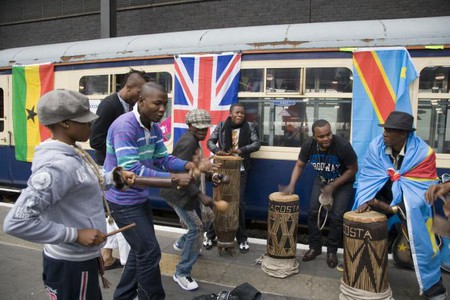 From the djembes and koras to melodicas and trumpets, from bazin dyed boubous to tight skinny jeans, from English and French to Wolof and Bambara, Africa Express has opened and continues to open a whole lot of new doors and musical possibilities, with diversity being the vital ingredient to its success. Without a doubt, each Africa Express event creates an electric atmosphere, as artists are pulled into the music frenzy, acknowledging each other’s differences and using these very differences to create something new and fresh, bringing together parallel worlds that would never have merged otherwise. Africa Express has a lot of potential and promises a lot more exciting events and productions in the future, not forgetting the less tangible spillovers resulting from cross-cultural collaborations, fostering a culture of tolerance and understanding, as well as driving new friendships and magical, shared experiences through the universal language of music.