The Most Beautiful Mosques iIn Algeria 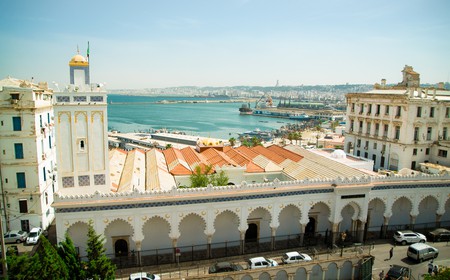 Africa’s largest country has so much to offer tourists, with its capital Algiers boasting an urban and modern charm mixed with traditional and historical colonial architecture and old medina. Combine Algeria’s history of rich and beautiful architecture with the fact it is an Islamic country, and it’s no surprise that there are countless mosques, famous locally and internationally, and each with its own unique beauty. Here you can discover some of the most beautiful in this enchanting country.

Otherwise known as The Great Mosque of Algiers, this beautiful piece of architecture is located in the historic Kasbah area of the city, very close to the Algiers Harbor, It has stood since 1097, with the minaret dating back to the 1330s, and the gallery on the outside of the mosque being built in 1940. It is now one of the only remaining stamps of Almoravid architecture, and it is even regarded as being one of the oldest mosques in the country. The mosque is a whitewashed, majestic building, square in shape and consisting of marble columns joined by beautiful arches. The interior is enchanting, full of hallways, passages, and rooms, each maintaining the theme of pillars and archways, giving the mosque a splendid feel of continuity and charm. Intricate mosaics adorn the floors and the walls of rooms which look onto a welcoming and spacious courtyard area. This mosque is steeped in history and splendor, and is by far one of the most beautiful in the whole of Algeria.

The Grande Mosque El Kabir, Jamaa El Jedid, or ‘The New Mosque,’ is actually one of the oldest and largest in Algeria, and is located in one of the holiest parts of the old town. Built in 1660 during the Ottoman Empire, this enchanting mosque combines various admirable architectural styles, including Byzantine, Italian, Turkish, and Andalusian, making it a cultural and artistic feast for the eyes. This intriguing architectural masterpiece can be entered through any of the four doors that represent a welcoming to every side of the world. Inside, visitors are wowed by stunning solid marble that remains from the original building and other beautiful interior decor, making it one of the most beautiful mosques in Algeria. 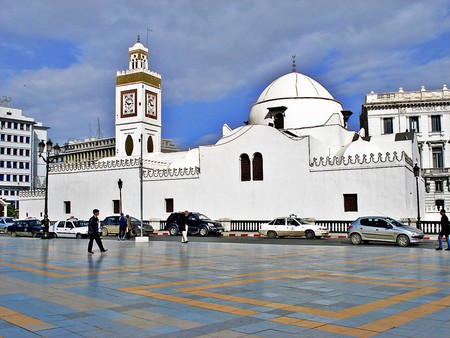 Perhaps not the most beautiful from the outside in terms of gold and precious materials (or lack thereof), but the most enchanting by story, Sidi Uqba is Algeria’s oldest mosque and is the product of the story of Uqba Ibn Nafi, one of the Prophet’s companions who conquered North Africa from East to West during the second half of the first century Hijrah. The mosque was built after his death, and surrounded Uqba Ibn Nafi’s tomb as a tribute to his huge victory for Islam. The mosque is beautiful if not for its decorative simplicity; the architectural features, which included palm tree trunks for pillars, were brushed with white washed mortar, and no lavish or expensive materials were used. In an almost enchanting way, the mosque was built simply both in materials and in layout that it almost mimicked the very first mosque built by the Prophet himself. Two majestic domes arise from the terrace, one covering the prayer hall and the other the tomb of Uqba Ibn Nafi, indicating the two most important features of this mosque. However, a lot of this simple charm has disappeared due to recent renovations, but for those who know the story and the history, the beauty is still very much there.

Located in the Kasbah, which is a fortress next to the Mediterranean sea and a unique Islamic city in itself, the Ketchaoua mosque was constructed during the Ottoman Rule in the 16th and 17th century and is rich both in history and in architectural charm. Historically glorified as a building of unparalleled beauty, it makes the list of the most beautiful mosques in Algeria. In its almost turbulent history, the mosque was actually converted into a cathedral in 1838 and a cross fixed to its roof. Following the liberation of Algeria from the French rule, the Ketchaouua Mosque regained its status once again and now stands as a strong symbol of Algeria’s recovery of its integrity as a nation. Aesthetically, the mosque is known for its beautiful fusion of Moorish and Byzantine architecture, resulting in such detailed and intricate carvings and exterior decoration. Inside, the chambers and ceilings are also spectacular examples of Moorish plaster work, making the Ketchaoua Mosque a piece of artwork both inside and out. 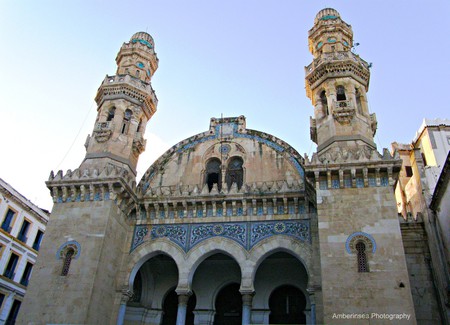 The Great Mosque of Tlemcen is an architectural masterpiece with innovative techniques thrown in. It stands as one of the oldest and best-preserved Almoravid buildings in the whole of Algeria, a reign during which the Muslim caliphate in North Africa was collapsing; thus, this mosque is a treasured stamp of Islam and a sign of strength for the religion. The Almoravid leader founded Tlemcen, previously known as Tagrat, in 1082, and began the building of the city with the Great Mosque. The spectacular mosque has a plan based on an irregular pentagon with horseshoe arches framing aisles that run perpendicular to the qibla wall, typical of North African mosques. The elaborate arches and intricate decoration mean that visitors and worshipers always marvel in its beauty; it is truly a work of art and a standing example of a rich and turbulent history in the religion of Islam and the country of Algeria.