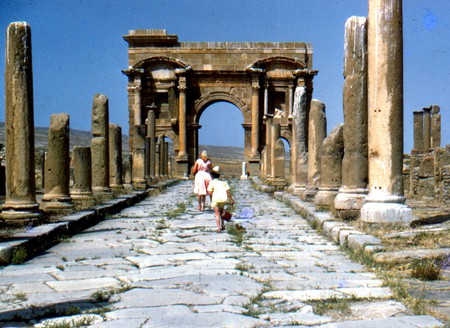 A melting pot of cultural influences, Algeria is a highly underrated North African tourist destination that has a lot to offer the historically, and culturally, minded traveler. With a veritable treasure trove of past influences ranging from French to Spanish and Berber to Roman, it’s no wonder the ruins here are almost as good as the architecture that still remains. Predominantly Roman, take your pick from our list of the eight coolest ancient ruins to visit in Algeria.

The home to a well-preserved and little-visited Roman theater rather grandly called Thubursicum Numidarum, Khemissa is a town in north eastern Algeria which is well worth a visit if you’re hunting for an in-the-know spot. The ruins, what are left of the old Roman town which was once there, have merged with the landscape, adding to the beauty and the drama of the hillside location which looks out onto Khemissa itself. The view from the small old forum is amazing, and the well-formed and still intact arches are truly impressive.

Rather grandly titled the ‘Pompeii of Africa,’ and UNESCO World Heritage recognized, Timgad is a fantastic example of a Roman colonial town that is a regularly recommended Algerian tourist attraction. Set in the lush hills of the northern Aurès Mountains, some of the must see points of interest at this fascinating sight include the Trajan Arch, which was restored at some point in the second century, and the Capitoline Temple. The latter is dedicated to Jupiter and is approximately the same size as the Pantheon in Rome, to give you some impression of the grandeur of this place. It is also one of the best examples of the logistics of Roman town planning, if that’s the kind of thing that floats your boat.

Moving briefly away from Roman ruins, the Qal’a of Beni Hammad was in the 11th century the first capital city of the Hammadid rulers. Not much survives of this fortified city, however the little that does is an intriguing insight into what life may have been like before the abandonment of it in 1900 due to the threat of a Hilalian invasion. Officially recognised by UNESCO in 1980, this archaeological site is set at a height of 1000m above sea level and is surrounded by an impressively beautiful mountainous setting. As one of the most precisely dated complexes of the Islamic civilization, the Qal’a of Beni Hammad is also home to the second oldest minaret in the country and a testament to the past palatial culture of North Africa.

Previously known as Tipasa, this is another of Algeria’s most famed Roman ruins and with good reason. Constructed on three small hills, overlooking the ocean, it was a small trading-post of much commercial, but little cultural, importance in Roman Algeria. However, this cultural unimportance has long since been banished to the past, as Tipaza boasts a unique amalgamation of Phoenician, Roman, palaeochristian and Byzantine ruins, alongside indigenous monuments. This is according to the UNESCO World Heritage Site website, to which Tipaza was inaugurated in 1982. Aside from all this historical interest, the pristine Mediterranean beach location doesn’t hurt, either.

Among some of the most interesting and perhaps lesser-known ruins in northern Africa, we have the Roman ruin of Lambaesis, situated next to the modern village of Tazoult. Similarly to Timgad, it is located in the Aurès Mountains and is also home to arches, baths and even aqueducts. However, this garrison town is well worth a visit for the gem that is the praetorium of the Third Augustan Legion alone. This commandant’s house dates from around 268 and dominates the site of the modern day ruins of Lambaesis, which was once the capital of the Roman province, Numidia.

One of Algeria’s most beautiful and well-preserved Roman archaeological sites, the Roman town of Tiddis is a rarely visited spot by travelers, making it one of the country’s coolest ruins to check out. Tiny in size, but grand in history, Tiddis is also the home to a temple of Mithra, the ancient Persian god of light and wisdom, cisterns and archways and is very close to the visually stunning ‘city of bridges,’ Constantine. However, unlike many Roman towns, Tiddis is unusual for its use of winding pathways that climb the steep hillsides on which it is set. Archaeologists believe this to be because the site was originally a Berber settlement that was occupied and developed by the Romans during the first century.

Meaning ‘beautiful’ in Arabic, Djemila is just that. Of the trio of well-known Roman cities in Algeria, this one is undoubtedly the best known, and it’s easy to see why. Set in the mountains of Setif, Djemila was formerly known as Cuicol and founded by Emperor Nerva Trajan in the first century. Arguably the most impressive feature of this ruin is the ornate, lavishly tiled museum that is incredibly well-maintained. Every inch of the ample walls is covered with mosaics, making for an intriguing and unmissable visual display. There are also a handful of elaborate houses, Byzantine churches and ancient temples on offer at these awesome Roman ruins. For its display of classical Roman architecture, Djemila easily warrants a spot in Algeria’s coolest ruins.

To round off the list, we move to Tlemcen, ‘the town of cherries.’ This National Park is a recent addition to the national parks of Algeria, but it is one of the best as it includes not only expansive forests, cliffs and waterfalls, but also several archaeological sites, most notably that of Mansoura. Mansoura was the ancient city upon which the modern town of Tlemcen was built, and it’s well worth checking out. The 13th-century ruins of this enormous ancient mosque are really imposing, giving you some sense of life in the ancient world and a remarkable introduction to the architectural magnificence of it. If Mansoura doesn’t interest you though, the mausoleum of Sidi Boumediene, a 12th-century Sufi leader, is also situated within Tlemcen national park.