Six Contemporary Artists from Algeria at the Mosaic Rooms

A group exhibition of contemporary Algerian artists, Intervening Space: From The Intimate To The World, was held at The Mosaic Rooms, London, throughout the Spring and Summer of 2013. The show, which represented the latest in a growing list of London exhibitions to turn a spotlight on contemporary African art, focused on six contemporary artists bringing Algerian art to an international audience. 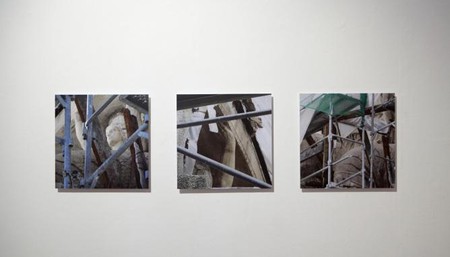 Fayçal Baghriche (b.1972) grew up between two cultures, navigating Arab society in the private sphere and western culture in the public realm. He has a diploma in Fine Arts from La Villa Arson, Nice, a BA in Dramatic Arts from Sophia Antipolis University, Nice, and an MA in Multimedia Creation from the École des Beaux-Arts of Paris. His practice is characterised by simple gestures, which are often attainable without recourse to any specialist expertise. Drawing on fundamental principles of visual rhetoric such as subtraction, inversion, or acceleration, he creates artworks that question the schema that organises human societies.

Baghriche has exhibited widely both in France and internationally. He has participated in Brooklyn Euphoria, New York, and the Dashanzi International Art Festival, Beijing. He has shown his work in Outpost for Contemporary Art, Los Angeles; Bielefelder Kunstverein, Germany; Al Riwaq Art Space, Bahrain; the Museum of Modern Art of Algiers, Algeria; the Museum of Modern Art, Paris; the Museum of Contemporary Art, Bordeaux; The Future of a Promise, at the 54th Venice Biennale; the Contemporary Arts Museum, Houston; the Gwangju Biennale and the HilgerBROTKunsthalle, Vienna. His work was also included in the Dak’Art Biennale 2014, Dakar, and exhibited at the Neuer Berliner Kunstverein (n.b.k.), Berlin and the Vögele Kultur Zentrum, Switzerland.

Baghriche’s Intervening Space installation, entitled Half of What You See (2010), attempts to spatially enact the saying “Believe half of what you see and nothing of what you hear” – and invites the viewer to reflect on the space between empiricism and scepticism through the medium of light and shadow. 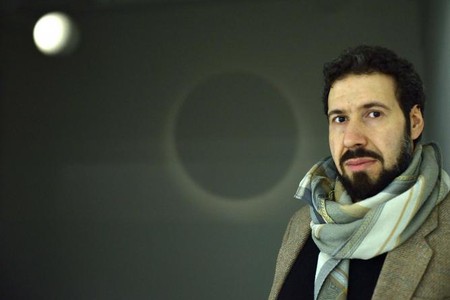 Fayçal Baghriche, Half of What you see, 2010 (Photo: | © Matthieu Parent (image of artist) / | Clementine Crochet (image of work)

Amina Menia (b.1976) lives and works in Algiers. She graduated from the École des Beaux-Arts of Algiers. Her work questions the relationship between architectural and historical spaces, and challenges conventional notions around the exhibition space. Her artworks are a crossover of sculpture and installation, triggering interaction from onlookers with socio-spatial configurations.

Menia’s Intervening Space work, Enclosed #0 (2013), takes a dominant memorial – the Monument to the Dead – located in the centre of Algiers as its inspiration. In this work she attempts “to underline discreet realities, highlight unseen details, [to] create links where dots were left.” She studies intervening spaces as fissures, which disrupt notions of common history and heritage in Algeria’s post-independence period. 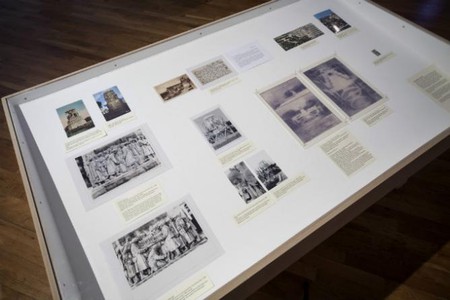 Atef Berredjem (b.1982) lives and works in Annaba, Algeria. He graduated from the École des Beaux-Arts of Algiers in 2007 and his artistic practice spans painting, assemblage, sculpture, installation, photography and performance. Berredjem’s work explores societies in perpetual socio-cultural changes and evolution towards modernism. He is interested in transitional phases in the process of development of practices and social habits.

In recent years, his works have focused on immigration and colonization, combining images, objects (readymades), words or sentences with materials and scenography. His Raft of Lampedusa (2009) and Africus (2009) are two installations that evoke, amongst other global issues, that of illegal immigration. More recently, the sound installation God says Ikraà (2013) addressed the phenomenon of mass consumption of technology products.

Berredjem has shown his work in various collective exhibitions, such as Memory at the Citadelle, Algiers (2005), Catalan Caravan at the French Cultural Centre in Annaba (2008), Casbah/Basket at the District Gallery in Marseilles (2008), Modernity in African Art Today at National Modern and Contemporary Art Museum, Algiers (2009), ARTifariti International Festival in Western Sahara (2009), Exploring paradigms; Female, gender and modernity at MUSAC, Léon and Casa Arabe, Madrid, 2012.

In the work of Berredjem, time, perception, and the constructions of possible realities are explored through gestures and language. In his new Intervening Space video installation, commissioned last year by aria and curated by London-based curator Nora Razian, he explores the often-subtle manifestations of power in daily life and its related banal forms of control and administration. In Continuum, the artist makes visible the rituals of administration of the public sphere and the forms of resistance that arise.

Hanan Benammar (b.1989) lives and works between Oslo, Paris and Amsterdam. She has a BA from the École des Beaux-Arts of Paris-Rueil Malmaison, and an MA from The Academy of Fine Arts, Oslo. Working in a wide range of media, from sound, text, video and film, to music and photography, her work is constantly redefined by her travels and is influenced by the extreme landscapes and chaotic atmospheres she encounters as part of them.

In 2009, Benammar realised a number of short documentaries about traditional art practices (including People from the Sky, Mongolia, 2009, and Pa Rouski Nietto, Russia, 2009). In 2010 she collaborated with Le Collège of the Biennale de Paris, rethinking the material/financial aspect of art activities, while contributing to the art pedagogy journal Josefffine. Since moving to Oslo in 2011, she has been involved in a variety of art events and institutions such as Ultima Contemporary Music Festival, Fritt Ord (Freedom of Expression Foundation), PNEK (Production Network for Electronic art, Norway), Black Box Theater, Spikersuppa Lydgalleri among others; producing sound installations, experimental music, texts, and performances.

Engaging with the idea of imperfection, Benammar’s Intervening Space work questions the transitional state of objects seemingly at the end of their life. In the newly commissioned Prenons un air dégagé: We already had no history (2014), she develops an object-based sound installation which recounts and performs possible and plausible fictional narratives from her own biography. 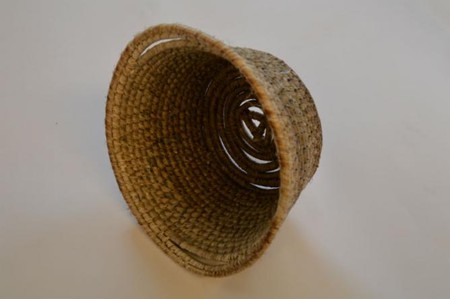 Massinissa Selmani (b. 1980) graduated from the École des Beaux-Arts of Tours. His work is characterised by extreme simplicity, often presenting montages of images and drawings, or short animations, in which mingle humour, irony, and sometimes even a sense of revolt. He was selected to exhibit at the 2014 Dak’Art Biennale.

Selmani has exhibited widely in France and Algeria, as well as in Tunisia, Serbia, Romania and Belgium. Previous exhibitions include solo and group shows at Gallery Mamia Brétesché and Gallery Talmart in Paris, the Biennial of Melle, France, Gallery Selma Feriani in Tunis, and the Museum of Fine Arts in Tours, France. In 2014 he exhibited at Gallery Yam in Mexico, and had works presented at the Singapore Art Fair.

Selmani’s Intervening Space work addresses modes of appropriation of urban non-space. The overcrowded neighbourhood of Diar Echems in the heart of Algiers is known for the riots that erupted in protest against squalid housing conditions. In his installation ‘Diar Echems (Maisons du soleil)’, (2013-2014), Selmani considers the subsequent development of a slum on the site of an adjacent football pitch, and the new social and spatial order this created. 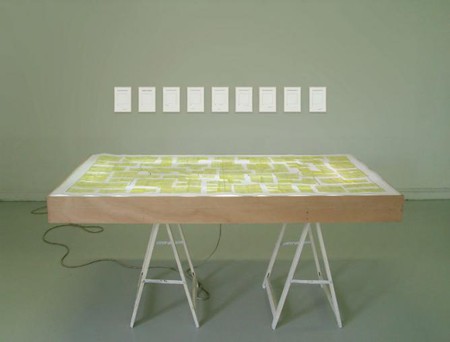 Sadek Rahim (b. 1971) is an Algerian artist whose work often combines photography and installation, technology and design. He graduated from the ALBA-Académie Libanaise des Beaux-Arts of Beirut, Lebanon, and holds an MA in Fine Arts from Central Saint Martins College of Arts and Design, London.

Rahim has exhibited widely in Algeria and internationally, including at the Museum of Contemporary Art (MAMA) in Algiers, The National Museum Zabana in Oran, the Montparnasse Museum, the Talmart Gallery in Paris, Oxford House Gallery in London, and the Alserkal Foundation in Dubai. He was also curator and co-curator with Metropolart Cities & Artists, Paris, and at the French Institute of Oran, where he was involved in collaborative events such as Nuit Blanche Oran, the 1st Salon of Contemporary Drawing, the Mediterranean Biennale of Contemporary Art and Video’Apart in Oran.

Rahim was in residence at The Mosaic Rooms for one month in 2013 to develop a new site-specific work for Intervening Space. Rahim’s work often intervenes in space; the artist takes a forensic approach also inspired by photographic process to study and revive singular liminal details of the Victorian townhouse. 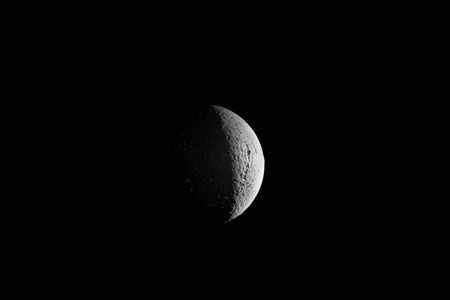 Fayçal Baghriche, Half of What you see, 2010 (Photo: | © Matthieu Parent (image of artist) / | Clementine Crochet (image of work)
Give us feedback