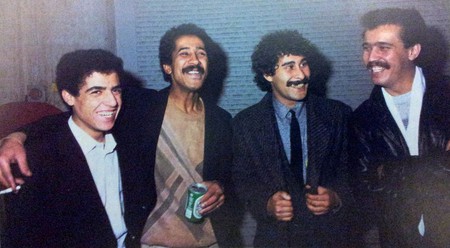 During the 1920s and ’30s, the coastal city of Oran in western Algeria was a busy port under French colonial rule. Europeans predominantly inhabited the city, which was surrounded by bidonvilles – the homes of dispossessed Arab migrants. From this melting pot of different cultures came raï, a new form of North African popular music.

Raï was first performed by women singers in the bars of Oran and nearby towns on both sides of the border with Morocco. The gasphah (an end-blown flute) and the guellal (a single-headed cylindrical drum) accompanied the singers. The early music of raï followed regional traditions: typically it would include repeated phrases and sung lines alternating with passages played on the flute. The melodic range was limited to that of the gaspah, with a greater important given to its timbral sound of hoarseness. Meanwhile, the guellal kept a steady rhythmic pattern throughout the performance, a characteristic taken from other local genres of dance or religious music. With waves of Moroccan, Saharan and Berber immigrants to the city, both before and after independence in 1962, the genre progressively absorbed a range of influences. 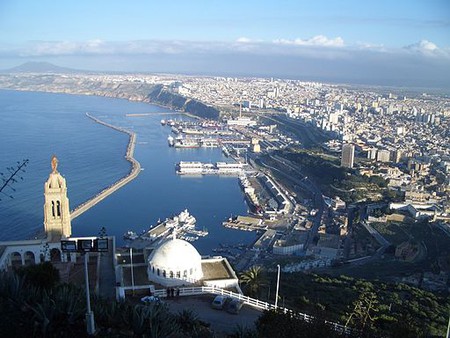 Sung in either Arabic or French, raï lyrics can often be bawdy and blunt. They express emotions of lust, passion, lamentation and powerlessness. These topics had previously belonged to a discrete female medhatte repertory: music performed privately at single-sex wedding parties. These were songs performed by women for women. Raï songs, however, were now being removed from this traditionally private sphere and moved into a public and morally ambiguous setting in front of a mixed audience. Raï singers were bold: their songs were raw, gritty and sometimes vulgar, and they did not shy away from controversial language. Its performers were widely condemned by the local Arab community as being immoral, as raï songs were not only performed for women, but also – and especially – for men.

Cheikha Rimitti: singing for the masses

The questionable moral associations of raï singers until the 1970s meant that performances were normally restricted to semi-public spaces, such as men’s bars, bordellos and wedding parties. This did not, however, prevent the singer Cheikha Rimitti coming to prominence during World War II and in the 1950s. She is perhaps most renowned for her daring record Charrak Gattà (1954), which encouraged young women to lose their virginity, scandalizing Muslim traditionalists. Nationalist forces fighting for Algerian independence also criticized her, as she was accused of performing songs perverted by colonialism.

Algeria won its independence in 1962, and the new government promptly banned her from radio and television. She nevertheless remained incredibly popular with the working-class poor, and she continued singing privately at weddings and feasts.

Since the 1970s there has been considerable experimentation in raï music, due in part to the arrival of cassette technology and the relative political calm. The genre increasingly merged with regional and global musical styles. Recordings by early raï performers – such as those by Messaoud Bellemou – did not display significant changes in melodic patterns and tonal range, but they did include an improvised introduction of free rhythm, most likely adopted from either andalouse or Egyptian traditions. Meanwhile, variations of the tam-tam rhythm began being included from the wedding musics from the Moroccan border.

Raï singers used the title ‘Cheb’ for men or ‘Cheba’ for women, meaning young. This title also reflects raï music’s main audience, as well as distinguishing them from an earlier generation of singers. They also sung in Darija, the local Arabic dialect. Linguistically and musically raï was the result of a combination of different cultures and traditions. This, combined with the genre’s immoral associations, still made it offensive to many Algerians. Raï music nevertheless became increasingly popular at wedding parties and in nightclubs in Oran. Recordings by the likes of Houari Benchenet, Cheb Khaled and Cheba Zahouania are representative of the music in this period.

Although raï music was still restricted from being broadcasted on the radio in the 1980s, the genre thrived. Expatriate Algerian communities and the broader, global music market took an interest in raï. The music itself began to reflect the genre’s rising globalization, by taking on facets from reggae and funk genres. Meanwhile, raï music also assimilated the chorus structures and harmonic progressions from Western popular music, as well as being influenced by Egyptian and Moroccan popular cha’abi styles.

Political unrest in the 1990s

When the government cancelled elections in 1991, Algeria entered into a cultural civil war. Amongst other musicians, writers, and artists, many raï performers were intimidated into silence or forced to flee abroad. There were even cases of singers being abducted or killed, including the ‘king of romantic raï’ Cheb Hasni. Born as the son of a welder and growing up in a working-class family, Hasni came to prominence in the late 1980s and early 1990s. He was most famous for his love songs, but he also sung about taboo subjects, such as divorce and alcohol. The controversial content of his songs – such as in El Berraka (1987), which contained lyrics about drunken sexual intercourse – fostered anger from Sulafist fundamentalists and Hasni received death threats from Islamist extremists. On September 29th, 1994, Hasni became the first raï musician to be murdered, followed by singer Lounès Matoub a few days later, and the raï producer Rachid Baba-Ahmed.

While raï singers were restricted in their genre’s homeland of Algeria, the genre continued to find popularity abroad. Singers such as Cheb Khaled, Cheb Mami and Cheb Sahraoui built successful careers away from the genre’s birthplace. The damaging effect of this, however, was that raï lost many of its distinctive local features. The political context and local tastes have restricted raï experimentation in Oran. Yet just over the Moroccan border in the town of Oujda, the genre endures, with artists such as Mohammed Ray, Les Frères Bouchenak and Mimoun el Oujdi still experimenting and blending European influences with raï’s local forms.