Khaled Hadj Brahim, better known as Khaled, is an international star in World music, who has used the love of his native Algerian raï and his unique voice and charisma to bring cultures together and express concern for current social issues in Algeria, France and beyond. We take a closer look at Khaled’s life, work and achievement. 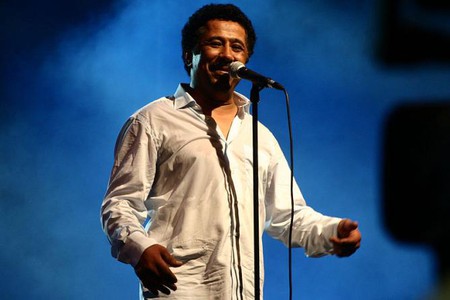 Born on February 29, 1960 in the suburbs of Oran, Algeria’s second largest city after the capital Algiers, Khaled knew from a very early age that he had a musical calling and was more interested in learning to play musical instruments than going to school. Much to his father’s disappointment, he left school at 16 to pursue his passion for singing and composing. At this time in Algeria, Khaled’s compositions, which spoke of women and alcohol, were not publicly accepted, limiting the first years of his career to weddings and the underground nightclubs of Oran’s Mediterranean coast. His career started to take off with the recording of ‘El Marsam’ in which he sings of love and carnal pleasure, but with a Western touch of electrical guitars and keyboards. It was through this that he caught the attention of a wider Algerian audience, and subsequently other parts of North Africa.

In 1985, he won first prize in the first Raï Festival in Oran and was given the name ‘Cheb Khaled’ – young Khaled – which he used as a signature until 1992. From this moment on, raï gained recognition in Algeria as a music genre, giving Khaled more scope for creativity. He began to develop the sound of raï by adding a touch of funk and reggae to his compositions and using even more Western instruments, such as the saxophone. 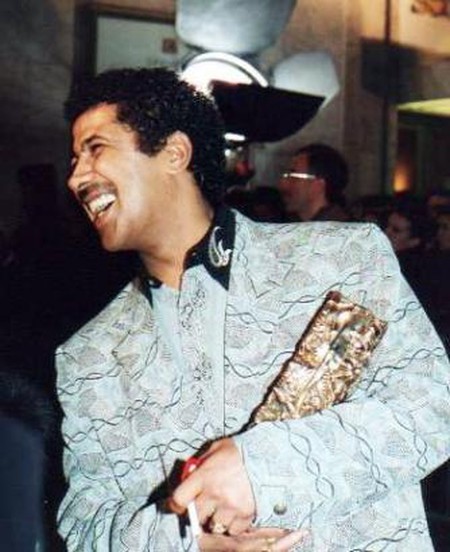 At the age of 26, Khaled left Oran for France, exporting with him the beginnings of his first major album ‘Kutché’, which he recorded with the famous Algerian jazz musician, Safay Boutella. In 1992 Don Was, known for promoting Bob Dylan and the Rolling Stones, produced his second major album, simply called ‘Khaled’.

The hit single of the album, ‘Didi’, became the first-ever song in Arabic to enter the French top 50. Its popularity didn’t stop there, as it reached further afield to India with an adaptation in Hindi, as well as Saudi Arabia, Brazil, Egypt and Israel. Khaled later performed the hit at the opening ceremony of the 2010 FIFA World Cup in South Africa. Khaled was now well and truly bringing Algerian music to the world music scene and, regarded as a symbol of North African culture in the Western world, went on to be dubbed the ‘King of Raï’.

This springboard to an international career opened doors to European and international tours, as well as collaboration with some of the big names in world music including Company Segundo or Santana and giants such as U2. But Khaled has always kept sight of his roots and remains sensitive to the hard times Algeria has suffered in a political climate of fundamentalism and terrorism. Considering himself a lay citizen, in 1995 Khaled co-founded an association called L’Algérie, La Vie (Algeria, Life) to campaign against these movements and staged several concerts in favour of freedom and expression. Khaled’s 2012 album, ‘C’est la Vie’ carries a message of tolerance, love and peace to create awareness around anti-Algerian discrimination in France and other parts of Europe. The album has sold 4.6 million copies worldwide.

For his compatriots who also immigrated to France his music brings a sense of nostalgia for the homeland. Oran is a running theme in his songs, and the 1997 recording ‘Wahrane Wahrane’ dedicated to the city especially evokes this nostalgia.

Among his biggest hits, ‘Aïcha’, the fruit of a collaboration with Jean-Jacques Goldman, famous French singer and composer and known internationally for his collaboration with Céline Dion, became the sound of the late 1990s in France, bringing raï music to an even more popular level. In 1998 people flocked to the legendary Parisian venue L’Olympia to see Khaled perform.

Khaled also joined with other well-known Algerian artists, including Rachid Taha and Faudel, to promote Algerian culture in France. In 1998 the trio staged a major raï event called 1, 2, 3 Soleils in Paris. Their raï version of Frank Sinatra’s ‘My Way’, originally written by Claude François under the title ‘Comme d’habitude’ (‘Like Always’) also became a major hit in France.

Now in his fifties, Khaled continues to be a worldwide icon of Algerian music, with involvement in global events including the FIFA World Cup 2014 for which he has recorded Coca-Cola’s commercial for Egypt, ‘Chaggaâ Helmak’ (‘The World is Ours’), with Lebanese star Nancy Ajram.

Married for over twenty years and father of five children, Khaled is a generation away from his native Oran. Raï music will nevertheless continue to blast from cars as they cross the city or cruise along the coastline knowing that it was here that the King of Raï took his first steps before shaping the future of World music.